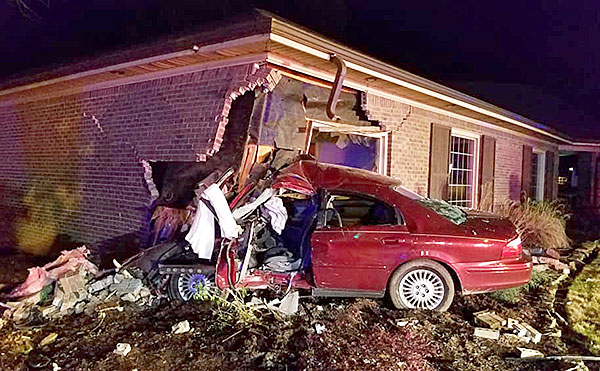 CRASHES INTO BUILDING – The Mercury Sable driven by Whitney DeArmitt is the result of a high-speed chase that began in Milan and ended in Humboldt when the vehicle left the road and crashed into a building. According to police, DeArmitt was speeding over 100 mph during the chase.

What began as a traffic stop by Milan Police last Tuesday morning, turned into a high-speed chase, then took a tragic turn that ended when the vehicle crashed into a Humboldt business.

Whitney DeArmitt crashed her car at the intersection of Main St. and 22nd Ave. in Humboldt, plowing into the corner of Professional Eyecare Associates building in the wee hours Tuesday morning. She was airlifted to Memphis in critical condition and is facing felony charges.

According to Milan police, DeArmitt was driving on Van Hook in Milan when she passed two Milan police officers, Brian Bennett and Lt. Bookout. The vehicle hit the brakes, then continued at a high rate of speed and disappeared. The officers pursued and saw the vehicle came back onto Van Hook heading east. The reports showed DeArmitt was coming up behind the policemen. Bennett stated he was in the fast lane at the time and changed lanes. The vehicle also changed lanes so police changed lanes again, as did DeArmitt.

When Milan officers pulled her over and made contact with DeArmitt, one officer stated she seemed to be under the influence of some type of narcotic. He also got a scent of alcohol, but she denied she had been drinking. The officer asked for her driver’s license, which she did not have. He then asked for her social security number in order to check her identity. As the officer contacted dispatch, he noticed DeArmitt reaching over to the passenger seat where her purse was located. When the officer approached the passenger side, he tapped on the window and asked her to unlock the door. When he asked what she was doing in her purse, she replied it was none of his business, according to the police report. Officer Bennett stated he was almost inside the car when DeArmitt put the car in drive and sped off at a high rate of speed, almost hitting him.

With speeds reaching 117 mph and DeArmitt was passing other vehicles on a double yellow line, Milan police stopped pursuit and contacted the Humboldt Police Department and other law enforcement agencies. 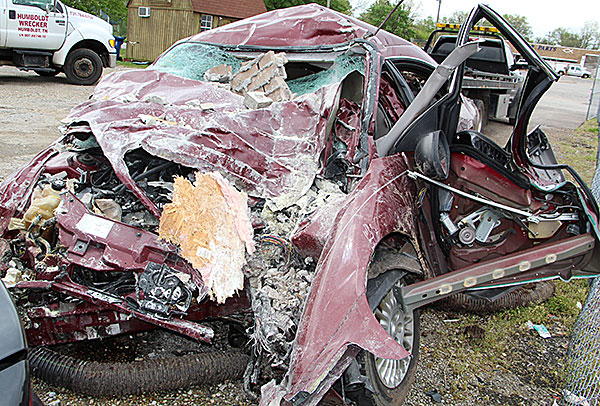 WHAT’S LEFT – This is what’s left of Whitney DeArmitt’s Mercury Sable after she rammed head on into the corner of a Humboldt business. Milan police clocked DeArmitt doing 117 mph at one time. She was airlifted to Memphis in critical condition.

According to Humboldt police, officers observed a vehicle matching the same description driving at a high rate of speed coming into Humboldt. Officers attempted to conduct a traffic stop on the vehicle but had to terminate pursuit. The vehicle continued to drive at a high rate of speed heading south on 22nd Ave. It all ended when DeArmitt reached the intersection of 22nd Ave. and Main St. where the car apparently went airborne and crashed into the corner of Professional Eyecare. Officers used fire extinguishers to contain a fire that had started.

Humboldt police, Humboldt fire, Humboldt rescue squad and Gibson County ambulance were on the scene. Humboldt Utilities was called in to turn off utilities to the building for safety purposes.

She was airlifted to the Med in Memphis in critical condition. 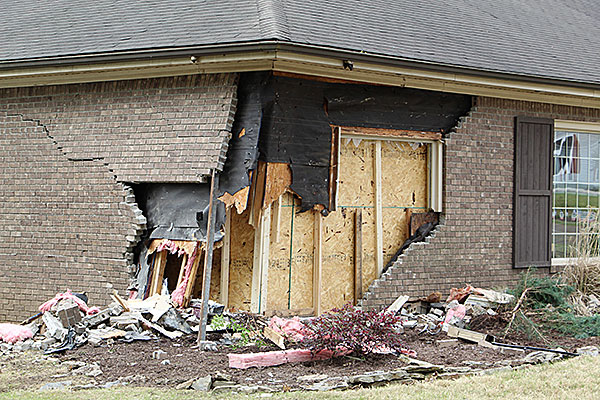 SEVER DAMAGE – The corner of Professional Eyecare Associate’s building was boarded up Tuesday afternoon after a car driven by Whitney DeArmitt plowed into the structure, causing severe damage to the building during the wee hours of the morning. DeArmitt is facing multiple charges from both the Milan and Humboldt police departments.