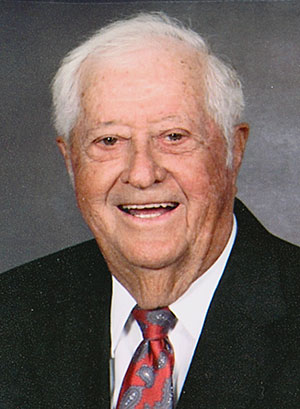 Last month, Humboldt Utilities was spotlighted as one of the festival dedications. Now, Langley has announced her second, the late Jack Ramsey.

Last week, Langley and Ramsey’s daughter, Suzanne Allison, got together to talk about Ramsey being named one of this year’s dedication recipients.

Up until his death last December, Ramsey had been the oldest living past president for many years. He died at 99 years of age.

“When asked to be general chairman last year, you start thinking of all the things you have to do,” Langley said of selecting Ramsey. “Jack was living at that time and was in good health. He was the oldest living past president so I thought he would be perfect, fitting, an obvious choice to be dedication.”

Allison, along with her brother Jack Ramsey Jr., have lots of fond memories of their day, especially during Strawberry Festival time of year.

“Last year was the first President’s Reception he missed, due to an upcoming surgery,” Allison said. “When Betty called, I was not shocked she wanted to honor him, but said, ‘Wow!” Of course we want to do this for dad.”

Allison said it is an honor for her father to be festival dedication this year. He had just recently passed when Langley contacted her. 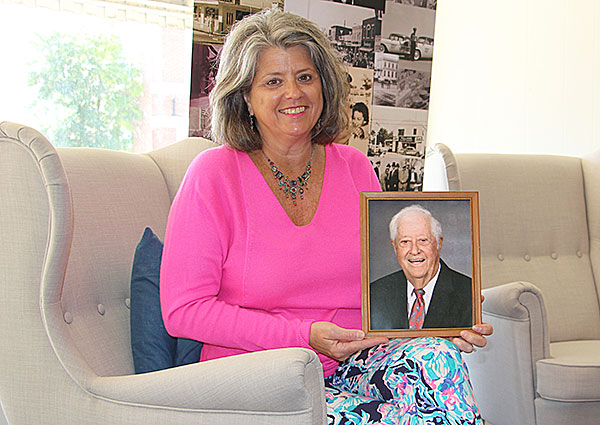 FESTIVAL DEDICATION – Suzanne Allison holds one of her favorite pictures of her father, Jack Ramsey. Ramsey is being honored as a Strawberry Festival dedication this year. Ramsey served as festival president in 1960 and chaired the Horse Show committee for over 20 years. Up until his death last December at 99 years, he had been the oldest living past president for over a decade.

Allison shared one example— his 90th birthday. Ramsey told his family that he did not want a birthday party. But Allison already had one in the works. Instead, she told her dad that they would have a family lunch together. On his birthday, a few guests stopped by to wish him a happy birthday.

As more and more people stopped by and he realized it was a surprise party. Allison said her dad was constantly going to the front door, looking through the window like a puppy dog, seeing who was showing up next.

Allison recalled some wonderful family memories that embodied just who her dad was.

“He loved seeing his family, the grands and great-grands and loved seeing them for the festival,” Allison said. “When mom (the late Mary Ramsey) got to where she couldn’t get around, we talked about getting the golf cart so she could go to the parade. I said we could get the trailer (the golf cart was at the country club). Dad said, ‘awe, don’t worry, I’ve got it covered.’ He had gone to the country club and drove the golf cart down the highway to our house on Main Street. He was probably 95 at the time. He was determined mom could go to the parade.”

Allison said they made sure they used the trailer to get the golf cart back to the country club and not allow him to drive it down the highway.
Ramsey was an avid golfer. Allison believes that played a part in his longevity. He was not a fan of medications either and would not take medicine.

“Dad used to go to the coffee shop and drink coffee with the guys,” Allison said. “Then he stopped going. He said all they talk about is the medicines they take. He never took meds and was healthy. He would go to the coffee shop, then go play golf—five days a week. Even playing golf in his 90s, he wasn’t as good and a little slower, but he could still shoot his age.”

For those who had the privilege of knowing Ramsey, they knew he was a jokester. He was always joking with and ribbing his friends. Even after he moved into Jackson Oaks assisted and independent living for seniors, he never lost his sense of humor.

Ramsey served his country in World War II, working in communications for the Army for almost 14 months where he ended up at the Battle of the Bulge and was one day short of having to go to the front lines. After the war, he returned home and went back to work for the phone company where he and Mary began moving around from town to town in West Tennessee as he was overseeing the conversion of phones from party lines to rotary dial. Eventually he and Mary ended up in Humboldt to raise Suzanne and Jack Jr.

As Allison looked back at the Strawberry Festival magazine from 1960 when her dad was president, several things stuck out. She noticed how different the festival was back then compared to now.

“It was a 4-day festival and there was not nearly as much going on,” Allison noted. “It was really three days and one event on Saturday.”

One page of the magazine was designated to dozens and dozens of signatures from Humboldt citizens, inviting everyone to attend and enjoy the Strawberry Festival.

In 1960, the festival ran from Wednesday to Saturday. Back then, there weren’t very many women involved, Allison noticed as she looked through the old magazine. Opening Ceremonies were held Wednesday morning at 8:30 a.m., but the golf tournament started at 8 a.m. There were two pageants, Jr. Beauty Pageant and Festival Queens Pageant. There was a strawberry show on Thursday and Friday. The Street Dance was held on Main Street at 9 p.m. Thursday was the Junior Parade as well as a Jr. Twirling competition. The Grand Floats Parade was on Friday, followed by the Sr. Twirling competition. Thursday evening was the Horse Show. The Governor’s Luncheon was on Friday. After Friday’s Queens Pageant, there was a Queens Ball at 10 p.m. Saturday was the Western Horse Show.

Ramsey helped lay the groundwork for future Strawberry Festivals. Now it is very fitting he be recognized with this prestigious honor as festival dedication.

“It was a given to honor him,” President Langley said. “Even though he has passed, we’ll always remember him in some way.”