Humboldt School Board members took the next step in hiring a superintendent during Thursday evening’s board meeting. Two agenda items were up for discussion—review and discussion of Dr. Versie Hamlett’s contract, and an update on the superintendent search. Both items overlapped during discussion.

This was the first mention of any plans for hiring an interim position and buying out the remainder of Dr. Hamlett’s contract that expires June 30, 2020. There was no discussion of options on the process of hiring either positions, interim or permanent.

Board member Valeria Wedley had reached out through email to TSBA assistant executive director and general counsel, Ben Torres. Wedley submitted a sheet with details of the emails, since she thought she would not be able to attend Thursday night’s meeting. Her original plans were canceled so Wedley was able to make the meeting.

One question Wedley posed to Torres, is it required that an interim position be posted/advertised? Torres’ response according to Wedley’s information sheet stated the board does not need to post/advertise for an interim but can choose to do so. Torres suggested the board set up a work session to talk about potential candidates. Most districts appoint an administrator to take over the director’s duties until a permanent is hired, as stated to Wedley’s information sheet.

There was more discussion on what steps should be taken to assure the school system is not left hanging.

McNeal said the board should hold a work session to discuss candidates for an interim superintendent and permanent superintendent.

Board member Mark Hodge asked if the work session would be private or public. Wedley said it has to be public.
Hodge said he has someone in mind and wanted to know how the board will let people know they are searching.

McNeal said that can be worked out in the workshop, as well as discussing whether or not to buy out Dr. Hamlett’s contract.

Hodge noted buying out her contract would cost money by paying for two positions at the same time. He said that money could be used for teachers or supplies.

McNeal replied saying, if someone within the system is used, there would not be nothing added to the payroll. If someone outside was hired, there would be more to pay. McNeal noted the school has funds available to hire if needed.

Board vice chairman Terry Johnson asked how will the board go about finding an interim.

McNeal said Wedley was assigned to lead the search process.

Wedley said she was pretty sure each person on the board has been getting an ear full (of potential candidates) and added that when it comes out in the newspaper, that may get more interest. 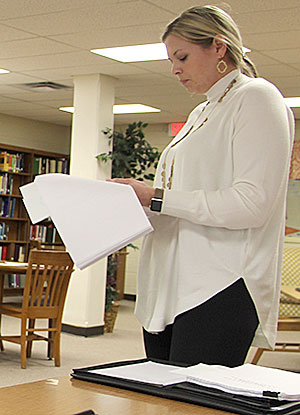 The board agreed to hold a work session. The date and time was not determined. McNeal suggested the board get with Cindy Love to set up dates.

•Marcie Williams of Alexander Thompson Arnold CPA gave a report on the school system’s audit. Williams said there are two parts of the audit—individual schools and the school district.

Williams began with the individual school’s report, noting Humboldt Jr./Sr. High School had three findings in the 2018 audit and two of those had been remedied. There were findings at HJSHS, mostly pertaining to fundraising procedure and moneys collected by the school staff. Williams said it is not uncommon for high schools to have findings since so many people are involved, many of which do not know proper procedures of the state.

Next Williams moved to the school district’s audit report where there were no findings, nor were there any comments by auditors for last year’s 2018 audit and this year too. Williams called this a big deal and said this was something to brag about.

She said in her 13 years of auditing schools, there are very few with no findings.

McNeal asked why Humboldt City Schools are spending $12,000 per child. He noted that Memphis spends the same but some other schools only spend $8,000. He said that’s a lot of money.

Dr. Hamlett replied that those figures include feeding every student two or three meals a day, as well as providing bus service for students.

McNeal still seemed amazed at the amount of money being spent on Humboldt students.

This is a total 180 from previous years where McNeal wanted all board members to have a say in what goes into the budget.

•The board approved bids for ERATE internet services. Technology Director Wayne Sheehan submitted the bid sheet reflecting only two bidders. Sheehan noted one bidder did not meet the specs of the bid and would be rejected for ERATE funding.

1Tennessee was awarded the bid at a cost of $4,989 per month. Sheehan noted 90-percent of the monthly fee would come from ERATE funds.

•The board approved continuing the contract for lawn maintenance with Kelly’s Lawn Service for another year. It was noted how well Kelly’s had kept the schools’ lawns looking and how easy they are to work with, especially during testing days at school.

•Finance Director Leanne Greene gave an update on roof repairs at Stigall. She said the roofers have been ready but rain has not allowed them to work. They need four good days.

•During a building fund report, McNeal voiced his displeasure with windows in the central office. He said there are towels in them and rain blowing in. He called the situation unacceptable.

Greene said she had called a company in Milan to give them an estimate so they would have an idea of the costs. She noted the project would have to be put out for bid.

McNeal told her to call Window World and get them out there. He said the buildings should not be going in lapidation.

Hodge asked if the students taking shop class could do some of the repairs and learn on the job. He was concerned about liabilities if student did the work.

McNeal agreed and called it a plus for the students getting experience.

Hodge also suggested it might get more students involved in the vocational courses offered at the high school.