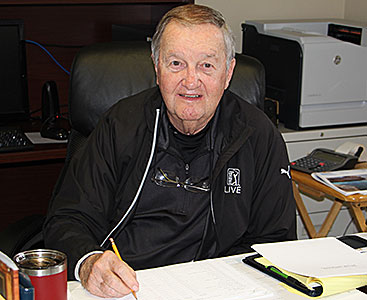 MAYORS ASSOCIATION PRESIDENT – Three Way Mayor Larry Sanders moved up in the ranks and is not president of the West Tennessee Mayor’s Association. Two years ago, Sanders was elected by the association members as the second vice president. Last year, he served as first vice president and now has assumed duties of the president. Every mayor of cities in West Tennessee is qualified to become a member. The group of mayors meets quarterly and discusses issues within their cities, how they may have been resolved and other topics. They network together and share ideas with each other to help make their cities better.

A local mayor has moved up in the ranks and has now advanced to president. Three Way Mayor Larry Sanders is the new president of the West Tennessee Mayors Association.

Every mayor in West Tennessee qualifies to become a member of the association, although several choose not to participate.

The mayors meet quarterly. The meetings can be held at different locations but Mayor Sanders said the past several meetings were held at the Southwest Development District building in Jackson, Tenn. He said the attendance per meeting is approximately 25 or so mayors across West Tennessee.

“I got involved when I was elected mayor (of Three Way) and took office in 2015,” president Sanders said. “We are a group of mayors and city administrators who meet to discuss issues we may face. We try to get our local legislators or other professionals to come to our meetings to support the cities.”

Sanders said the group hopes to have Governor Bill Lee attend their meetings. He did say that several of the governor’s cabinet members have spoke during some of their meetings.

Mayor Sanders was first elected to the association in 2018 as second vice president. The next year he moved up to first vice president. Last month, Sanders became president. The West Tennessee Mayors Association (WTMA) also elects a treasurer and a secretary. The secretary position is the only one that is not a mayor or city administrator. Instead, the secretary is typically a member of MTAS (Municipal Technical Advisory Service), which is a part of the University of Tennessee.

President Sanders said the biggest topic of discussion during several meetings is the Memphis Regional Megasite located in Haywood County, with a small portion in Fayette County. The megasite is 4,100 acres with access to I-40 as well as railroad access.

During the association’s February meeting, President Sanders led the charge to urge state officials to continue building and promoting the site. WTMA members voted to approve a resolution supporting the site and urge Governor Lee to make the site shovel-ready.

Once the entire group took a bus and toured the megasite during one of the WTMA meetings.

Sanders and other mayors believe that once a big company locates in the megasite, workers from all across West Tennessee will seek jobs there. Plus, there is a good possibility that suppliers for the large company will locate nearby in cities in West Tennessee.

“For one meeting, we invite all the state legislators, representatives and senators, to come,” President Sanders said. “We have an open forum and talk about pending legislation.”

Sanders said there have been college representatives who attend meetings and discuss what their institutes offer for training and education for the workforce.

The WTMA’s mission statement is simple and to the point, “To provide the economic interests and public welfare of the municipalities of West Tennessee.”