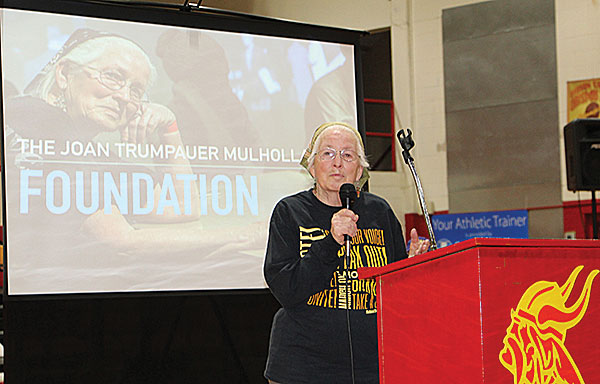 CIVIL RIGHTS PROGRAM – Joan Trumpauer Mulholland brought a heart-wrenching civil rights program for Humboldt Jr./Sr. High School students last week. In the 1960s, Mulholland stood beside black students during peaceful protests against segregation. Mulholland attended Martin Luther King’s famous “I have a Dream” speech in Washington D.C. She was on the front line fighting for civil rights and was a pioneer in the quest for equality.

Students at Humboldt Jr./Sr. High School received a history lesson like no other. Last Wednesday, Joan Trumpauer Mulholland visited students and told her story of her first-hand experiences of the racial hatred in the 1960s. Her son, Loki, helped with images and videos played on the screen in the Thomas Boykin Gymnasium at the school.

The mother/son duo presented two programs on the day. The first was for high school students, the second for junior high students.
Mulholland is a white woman who sided with black college students early on in the civil rights movement.

“It was the right thing to do,” Mulholland told the students. “I knew segregation was wrong.”

In 1960, black college students held peaceful protests called sit-ins. These black students would go to places where blacks had not been allowed. But when the Supreme Court ruled against segregation, the movement began.

Mulholland told stories of the Freedom Rides where blacks tested the Supreme Court’s ruling there could be no segregation on interstate travel. Buses took to the roads. One bus in Anniston, Ala. was hit with a firebomb.

She talked about 1963, which she dubbed the best and worst year. Mulholland was among students sitting at the counter at Woolworth’s in Jackson, Miss. on May 28, 1963. Pearlena Lewis, Anne Moody and Memphis Norman sat at the lunch counter and soon a mobbed stormed the store. Norman was pulled off the stool and beaten in the floor. Lewis and Moody were pulled from their seats. That’s when Mulholland and Professor John Salter took their seats. 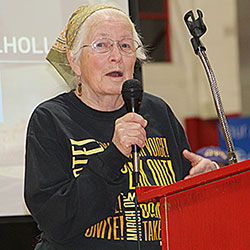 Mulholland told a vivid story of how people poured sugar on their heads and sprayed their faces with salt and pepper. Salter was hit in the back of the head with brass knuckles, splitting his head open. Some people burned Salter on the back of his neck with their cigarettes. But the students persevered and stayed until the manager closed the store and police gave them safe passage back to their cars.

The Civil Rights Movement made its way for the March on Washington (D.C.). Mulholland said the news warned of riots. There were none related to the march, she told the students. This is where Dr. Martin Luther King Jr. made his famous “I have a dream” speech. Everything was peaceful and beautiful, she recalled.

Just weeks after the peaceful March on Washington, the Ku Klux Klan planted a bomb at the 16th Street Baptist Church in Birmingham, Ala., which killed four little girls.

Mulholland talked about the march from Selma, Ala. to Montgomery, Ala. On March 7, 1965, 600 Civil Rights activists marched across the Edmund Pettus Bridge to the state capitol, calling for a National Voting Rights Act.

These were chilling stories Mulholland told to the students. Humboldt students received a lesson in history that changed America for the better. None of the students were born when the Civil Rights Movement took place. Most of their parents had not been born yet either. But, their grandparents and great-grandparents lived through it.

The Civil Right Movement is a time in history that should never be forgotten.