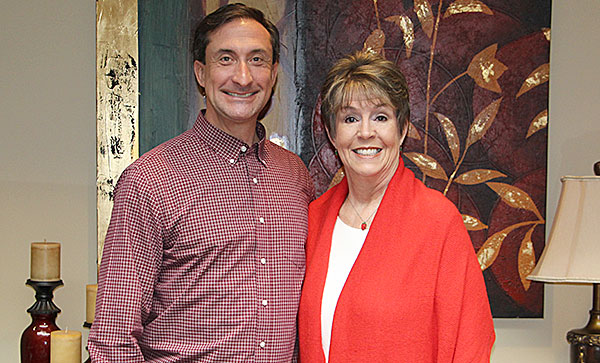 Utility company does so much behind the scenes

In a little over two months, Humboldt’s pride and joy will be in full swing. The West Tennessee Strawberry Festival will be here before you know it.

Last week, festival president, Betty Langley, announced this year’s dedication. In fact, there will be two dedications this year.

Humboldt Utilities is the first to be announced. The other dedication will be announced in the upcoming weeks.

“Humboldt Utilities does a lot for the festival,” Langley said. “People don’t know just how much they do.”

“It’s humbling to be recognized,” said Humboldt Utilities General Manager Alex Smith. “We want to make Humboldt as successful as it can be, whether it’s the Strawberry Festival or anything.”

As most people know, it takes dozens and dozens of volunteers to put on the Strawberry Festival each and every year. Humboldt Utilities does so much behind the scenes, their hard work and dedication might get lost. This is the reason Langley selected Humboldt Utilities as the dedication.

“I’m proactive because you always have something to do down the road,” Langley said of her process to select the dedication recipients. “As general chairman last year, you start thinking of individuals or groups who help the festival. I thought Humboldt Utilities was the obvious choice.”

Practically everyone knows the utility company puts up the sponsorship flags on the utility poles along Main St. and 22nd Ave./East End Drive. And they hang the striped banner flags across Main St. But that is just the tip of the iceberg.

“It takes more than a week,” Smith said. “It starts months before.” 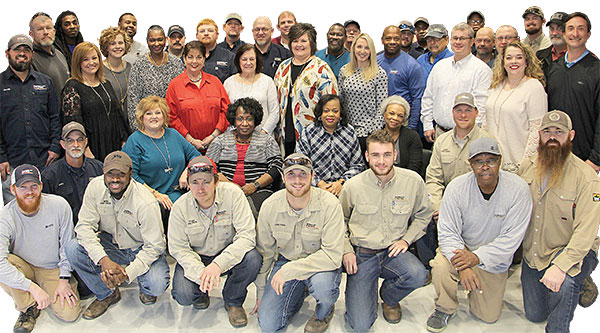 Smith said Humboldt Utilities workers check the stadium lights at the Chalmus Davenport Arena for the Horse Show and at Barker Memorial Stadium for Opening Celebration. Smith said they check every bulb.

They make sure all the concession stand vendors have electricity and water. There are many electrical panel boxes located on utility poles along Main St. that have to be checked and made sure they operate properly. When the vendors set up, Humboldt Utilities makes sure each concession stand is connected to the correct electrical box and connected properly.

The old carnival site on Spangler Drive is still used by the carnival staff as the location to park their trailers in which they live. Smith said Humboldt Utilities provides electrical and water services to the site.

Although the carnival is self-sufficient with generator electricity to power the rides, Humboldt Utilities provides water and some electrical service as well.

Practically every Strawberry Festival event requires additional electric and water services, such as the Barbecue Cook-off and the Car Show.

“Every morning, 30 minutes before the parades, our guys drive down Main Street to straighten the flags and banners,” Smith said of another way Humboldt Utilities wants to make Humboldt shine.

Yes, it is Humboldt Utilities job to provide the services needed, but they go above and beyond their normal call of duty before, during and after the Strawberry Festival.

Often times, members of their staff assist with assembling the stages used throughout the week for the live entertainment, pageants, reviewing stand and the BBQ Cook-off.

Smith is proud of the staff for always wanting to pitch in where needed. Humboldt Utilities’ Michael Longmire has served as parade marshal for many years. Longmire got his feet wet under the tutelage of Father Joel Wiggs, who was parade marshal for decades many years ago. When Father Wiggs retired from the volunteer position, Longmire stepped up and took the reins.

Speaking of call of duty, Humboldt Utilities never takes a day off. Someone in every phase of the departmental services is on call—any time, any day—in case of an emergency. Smith said there will be staff working during the parades to make sure that everything runs smoothly without a hitch.

Smith recalled a couple of incidents that happened where crews were called in. One happened just a few years ago when a car driving on Main Street clipped a utility pole about an hour or two before the parade was to begin. Utility trucks were on the scene and installed a new pole and had electrical service going in time for the parade to begin on time.

Another incident happened when a water line broke in front of the fire station on Main Street during the parade. Crews worked feverishly to repair the damaged line to keep from flooding the street.

This May, the staff of Humboldt Utilities will be celebrated and recognized during the Strawberry Festival.

“Humboldt Utilities will have matching shirts for the parades,” Langley noted.

Smith said he hopes to have as many Humboldt Utilities’ staffers walk in the parade on Thursday. Plans for participation in Friday’s parade are still up in the air, but Humboldt Utilities will certainly have a place in the parade lineup. Smith noted some staffers have worked on floats for their children to ride in the parade. Plus, some will actually be on the clock working and not be able to parade down Main Street.

With the Strawberry Festival literally weeks away, Smith and Langley can’t wait for the flags and banners to go up. When those flags and banners are up, people in Humboldt really get excited knowing Humboldt’s biggest and best week of the year is about to happen.

In the meantime, Humboldt Utilities will keep the lights on, the water running and draining, and the natural gas flowing for all of Humboldt to enjoy.