During last week’s Humboldt Board of Mayor and Aldermen meeting, board members received a copy of the city’s 2018-19 fiscal year audit report. Mayor Marvin Sikes presented the report for discussion and approval.

Matt Wood of Alexander Thompson and Arnold CPAs went over several highlights of the report. He said it was a “clean” audit and there were no findings. Wood noted the city’s audit includes not only the city of Humboldt, but also Humboldt Utilities and Humboldt City Schools, since all three are part of the city’s budget.

Wood called attention to a few pages in the audit, one showing a net increase of over $3 million. He said much of that was due to pension plans. He also pointed out that the city is operating at around 27-percent (reserve), which is a good amount. Wood said it makes things easier with budget planning and not having to keep looking for ways to fund department operations or projects.

The audit showed the city paid off $365,000 in governmental activity.

Mayor Sikes thanked Wood for his report. The mayor thanked his department heads for staying within their budgets and he thanked the board for working on the city budget.

The board unanimously approved the audit report, 4-0. Board member Donna Johnson was unable to attend the meeting.

•The city received two bids for the downtown Phase III project. This project calls for renovating the sidewalks on S. 14th Ave. for two blocks off Main St., along with decorative lighting and ornamental trees.

Mayor Sikes reminded the board that they had approved Phase III a couple of years ago and that it is not unusual for projects to take some time. Sikes said with the bid process approved, work should begin soon.

All the documentation will be sent to the Tennessee Department of Transportation. It was noted during the meeting that it usually takes around three weeks before it goes through TDOT’s production meeting. 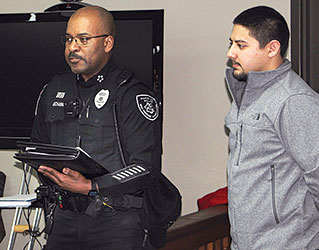 Mayor Sikes said he hopes to not be tearing up the road and sidewalks during the Strawberry Festival.

The chief noted that Garcia has worked as a jailer at the Gibson County jail since December 28, 2015.

Alderman Don Graves asked Garcia if he was bilingual, to which Garcia said he was.

Last August, while working for the Gibson County Correctional Complex, Garcia stopped an inmate from committing suicide. The inmate was an out of state fugitive being held in Trenton. The next month, Sheriff Paul Thomas honored Garcia for his heroic actions.