Portion of GC Industrial Park
to be designated for business growth 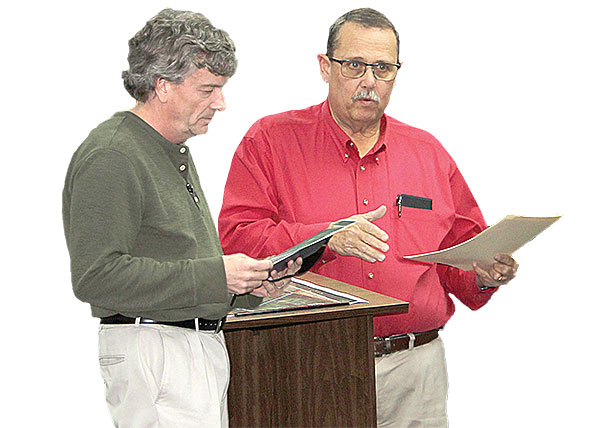 DEVELOPING MASTER PLAN – Kingsley Brock (left) and Tommy Goodrum (right) make a presentation to the Humboldt City Board last week to give an update on bringing commercial development to a portion of the Gibson County Industrial Park. Brock is Gibson County’s director of economic development and Goodrum is a member of the Humboldt Industrial Development Board. Both have been working, along with the Gibson County Industrial Development Board, to come up with a plan to use a portion of the industrial park. They hired Carlson Engineering Consultant to draw up a master plan that would give a roadmap of which types of businesses would be interested in the area and the locations and amount of space needed. Hopes are to have nice hotels, grocery stores, restaurants, banks and other businesses locate here.

Humboldt City Board members heard from members of the Humboldt Industrial Board last Monday evening about plans to bring new businesses to Humboldt. Tommy Goodrum of the Humboldt Industrial Board and Kingsley Brock, Gibson County director of economic development, made a presentation to the city board that included an aerial map, which showed exactly where the property is located.

Mayor Marvin Sikes said he asked Brock and Goodrum to speak to the board to keep them updated and abreast of current and future plans.

Goodrum pointed out to the city board the portion of property inside the Gibson County Industrial Park that will be set aside for commercial and retail growth. He noted that ever since Tyson announced plans to locate a new plant in Humboldt, the city and county have received multiple inquiries about property in the vicinity.

The Humboldt IDB wants to make sure the property is utilized wisely, so they’ve contracted with Carlson Consulting Engineers in Bartlett, Tenn. to develop a master plan. The Gibson County Industrial Board has agreed to share the firm’s fee of $25,000.

Brock and Goodrum said the development of this property should be done by professionals that do this every day. They noted that they do not know how much land a hotel or grocery store might need, nor do they know the best location within the development area. That is why the industrial boards agreed to hire the consulting firm.

Goodrum told the city board that the original plan had been for 49 acres on the southern side of the Gibson County Industrial Park that includes 42 acres of road frontage. This would be the area along Hwy 45 north of the dialysis clinic to the park’s entrance road. The designated area also includes property behind Wendy’s and Wall Street Grill.

“At first, it was going to be 49 acres on the front, but the plan will include land all the way to the back (of the industrial park),” Goodrum explained to the city board. “In the next six months to a year, you will see things getting done. We want to feel comfortable (with the plan), but very thorough in our planning.”

Brock added that the master plan will be flexible, “Nothing would be set in stone. This gives us a roadmap of where to go.”

“What about housing?” Alderman Don Graves asked Goodrum and Brock.

Goodrum said there are currently no plans for housing but it could be a possibility. There was talk during the city board meeting that part of the property could be used for townhouses, apartments or other types of housing.

“I would like to save it for industry,” Graves said. “I wouldn’t be in a hurry to sell.”

“That 42 acres of frontage, we hope to go first for a hotel, a grocery store or other business,” Mayor Sikes added. “That’s prime land for development.”

Brock explained to the board why opening up the land for commercial development makes sense. He said with Tyson bringing in 1,700 jobs, another industry would not want to compete to find the workforce, even for a smaller industry of 100-200 jobs.

Mayor Sikes said there is still plenty of room in the industrial park for more industry on that backside, even on the other side of the railroad track. Sikes said the north portion where Tyson is building has room for two or three other industries.

Brock said the amount of revenue from taxes from commercial development would be more than any industry would bring in, especially if the city and county offer attractive packages that offer tax breaks for a number of years.

Goodrum said the master plan should be finished by April.

As for the opening date for the Tyson food processing plant, it is on schedule for December 1 of this year. The Humboldt Industrial Board expects development on the commercial property could see movement before the Tyson plant opens.

In other Humboldt City Board action:

•The board voted to approve Resolution 2020-01 – wastewater facilities project. The resolution allows the execution and delivery of the application for a project load of $4.8 million to funding all or a portion of the $26.8 million project for Humboldt Utilities.

•Resolution 2020-02 – Water Facilities Project was presented for approval. This resolution was basically the same procedure as the previous resolution except for water instead of wastewater.

This resolution approved funding $510,000 of the overall $6.5 million water project.

•The board approved the resignation of Clifton Davis, a dispatcher with the Humboldt Police Department.

Chief Buchanan said it was. Davis first resigned as a patrolman but was later rehired to be a dispatcher.

•The board approved hiring Jeremy Douglas as a new police officer, upon the recommendation of Chief Buchanan. In his recommendation letter to the board, Chief Buchanan said Douglas had passed the police exam, physical agility tests, medical exam, drug screening, psychological evaluation, and he meets all the requirements of Tennessee law to be a law officer. The letter noted his background check, reference checks and conducting interviews, Douglas appears to be an excellent candidate.
Douglas, who attended the board meeting, said he has experience as a law officer and had previously worked as a jailer for Gibson County since April of 2019.

Graves asked if Douglas would have to attend the Police Academy, to which Buchanan said he would.

Graves remarked that it was good to have someone from another agency come to work for Humboldt.

•Mayor Sikes recommended two appointments to the Humboldt Planning Commission Board. He recommended Jason Snell be re-appointed and John Blankenship as a new appointee.

Both of the mayor’s recommendations were approved.