After six years on the job, Humboldt Mayor Marvin Sikes says there is still work to be done. Mayor Sikes addressed a group of people last Thursday morning during Breakfast with the Mayor, an annual event organized by the Humboldt Chamber of Commerce. 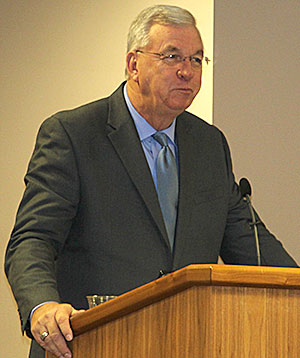 Dozens of people gathered in the Humboldt Medical Center’s conference room to hear the mayor speak. Prior to the speech, a buffet breakfast was served.

“I enjoy being here and sharing the good news in Humboldt, Tennessee,” Mayor Sikes said as he opened his speech.

He thanked the chamber staff, Amanda Love, Beth Culpepper and Sydney Crews for all they do to promote the city and for hosting the breakfast. Sikes recognized his staff and department heads for their hard work and commitment to serving Humboldt.

During his six years serving Humboldt, one of the most important things he learned is to show all people love, kindness and forgiveness. He said if he could not forgive people, he would lose a lot of sleep.

Mayor Sikes took a look back at 2019 early in his presentation. He called 2019 “a different year” as compared to 2018 with the news of Tyson locating here. He said that one announcement was the high note that got things moving.

One of the byproducts of that huge announcement was seeing more businesses opening up shop in Humboldt. He talked about driving down Main Street and not being able to find a parking place. It reminded him of times many years ago when downtown was booming.

Mayor Sikes spoke about the renovations and updates at Mary Ann Carter Park and how a $25,000 grant from the Boyd Foundation was used to create a dog park. The city used $9,000 from a trust set up by the Carter family many years ago to help make the dog park happen. The park now has two fenced areas, one for smaller dogs and one for larger dogs. Humboldt Utilities did additional work there that allowed for watering stations and other upgrades.

Humboldt Public Works moved into their new digs in 2019 on the corner of Mitchell St. and Central Ave. The property was deeded to the city as one of the back tax properties from Gibson County. The Parks & Recreation Department shares the new facility. Much of the work to renovate the building was done by city employees.

The city applied for and was approved for a parks and recreation grant for over $1 million. The grant is a 50-50, meaning the city will have to put in $500,000 and receive $500,000 from the state. Grant funds will be used for new playground equipment and upgrades to Bailey Park, Spangler Park, 6th Street Park and Mary Ann Carter Park.

Friends of the Library sold a lot on the corner of Burrow and Central Ave. to the city for $1. The property is being surveyed. A pavilion that had been planned to be built on the parking lot behind the library has been relocated and will now be built on the newly purchased property. The pavilion can be used for the Farmers Market, family reunions, outdoor concerts or any number of events. It will be built using some of the Parks & Rec. grant. People should see some movement on the 2019 Parks & Rec grant with park improvements and the pavilion.

“New houses are being built and several being remodeled in Humboldt,” the mayor noted. “Isn’t that great?”

The city has torn down over 90 houses and buildings since Sikes became mayor. These were properties with back taxes that were deeded to Humboldt from Gibson County. The city is having a lot of interest from developers and investors in these lots.

“I’m currently preparing a list of ‘workable’ properties,” the mayor had said prior to the breakfast. “Due to the size of the lots, some properties may not have the needed set-backs according to zoning in order to build a minimum 960 Sq. Ft. house.”

“Humboldt citizens will soon see results of the 17 grants the city is working on,” Mayor Sikes noted. “Phase 3 of the downtown renovation project could begin any day now.”

Phase 3 includes S. 14th Ave. from Main Street To Penn. Phases 1 and 2 have been completed over the past few years that updated Main Street and N. 14th Ave. Each phase included new sidewalks with handicap access points, decorative lighting, trees and landscaping.

Earlier in the week, Mayor Sikes talked about the Tyson plants and their progress.

“The Tyson Processing Plant is scheduled to open December 1st,” he said. “There will be 800 workers. These people need a place to go to church, a place to shop, a place to bank, a place for recreations—even if they do not live in Humboldt, they will be here working, spending time here and spending money here. Just think of all the new relationships to be built. It’s a wonderful challenge.”

With Tyson locating in the Gibson County Industrial Park, a new road is being constructed—one strong enough to handle all the truck and vehicle traffic. Hwy 45 will be widened and a new turn lane created. The industrial park’s entrance sign will be move further into the property to make way for the highway. A new traffic light will be installed at the entrance as well.

The Tyson Hatchery in the Humboldt Industrial Park should open in a few months, as will the new Tyson feed mill in Fruitland.

“We must find common ground and refocus on our school system and education,” Sikes added. “People moving to Humboldt demand a good school system.”

Things are evolving in Humboldt. The economy is good and a positive upswing with new commerce is coming soon. The city and chamber are working hand-in-hand to bring in new businesses. Mayor Sikes praised Kingsley Brock, director of economic development for Gibson County, for his expertise. There are 42 acres of the Gibson County Industrial Park that have been set-aside on the southern side for commercial development. The city and chamber are working to get a hotel to locate here, as well as retail stores. They are working on a master plan for the 42 acres and have invited contractors and developers to join in the discussion.

The mayor is forming a team of local people to discuss healthcare, a hospital or ER. Healthcare is vital to Humboldt, especially with 1,600 new people living in or working in Humboldt within the next two years.

As Mayor Sikes closed his presentation, he said it has been a wonderful six years serving the city as mayor. He’s looking to continue for six more years, as an unofficial announcement that he will seek re-election in 2021 for a third term as mayor.