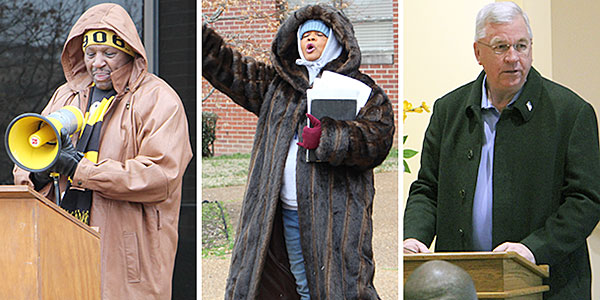 With temperatures in the 20s and snow falling from the sky, many Humboldt community members braved the cold Monday morning to make the annual Martin Luther King Jr. Day march from Morning Star Missionary Baptist Church to the Municipal Building and then to St. James Baptist Church.

MARCHERS – Humboldt community members made the march from Morning Star Missionary Baptist Church to the Municipal Building and then to St. James in below freezing temperatures. They could be heard around Humboldt singing about Martin Luther King.

As usual, the crowd, led by Gwendolyn Thomas, could be heard all over Humboldt singing songs of praise about Martin Luther King Jr. as they made their way towards the Municipal Building.

JOINING HANDS – The crowd began to hold hands at they sang, “Martin Luther King had a dream. He wanted everyone to join hands together.”

Once there, Timothy Adams, president of the NAACP Humboldt/Gibson County chapter, made the introductions.  Following Adams, Dr. Frank Thomas gave a few words of his own.

Thomas said, “There is only one race and that’s the human race. God made every man of one nation, one blood.” 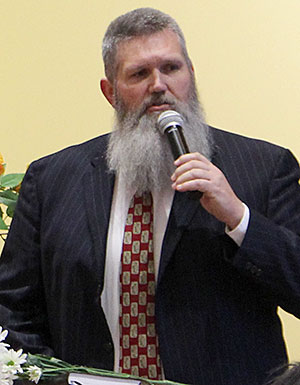 REV. HODGE – Rev. Mark Hodge complemented the members of St. James on their new church building and told a moving story to all who attended the program.

Thomas gave many validations that we are of one race and he also stated that we should try to make an impact on this world because that is what Martin Luther King did.

Trying to keep the speeches short due to the cold, they closed with song led once again by Gwendolyn Thomas.

During this part of the song, everyone began to hold hands.

At St. James, they opened with “Somebody’s Knocking at your Door”.

Pastor Mark Hodge was asked to take the stand. He told the crowd that this was one of his biggest honors to be able to speak at a church that has been in Humboldt for as long as it has. He also complemented the church members on how beautiful the new building is. After his introductions, he read a few scriptures, one of them being 1 John 4:16, which states, “And we have known and believed the love that God has for us. God is love, and he who abides in love abides in God, and God in him.” He then told a story of flowers. He stated that he had stopped at a flower shop before coming to St. James to pick up a white rose, the flower of love, but the flower shop did not have any due to there being many deaths recently. The florist, however, did give him a different kind of white flower, which he held up for the crowd to see. “The power of the flower isn’t in the bloom, it’s in the root,” he said. “Dr. King, the bloom, is gone but even when our bloom is over, we must leave our root behind like Martin Luther King.” 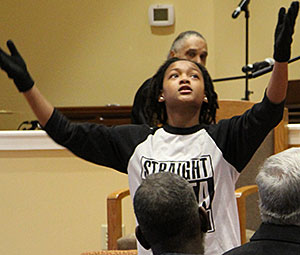 Next on the program was Amelia Patterson who performed a beautiful praise dance for the crowd.

Thomas recognized all of the city officials present, which were Mayor Sikes and Chester Owens, and asked for a round of applause. 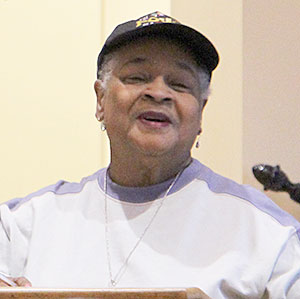 SEYMOUR SPEAKS – Donna Seymour gave a wonderful speech during the MLK program, saying, “I thank God for putting a man like Martin Luther King on this earth.”

A love offering was then received, followed by a speech from Humboldt Chronicle writer, Donna Seymour.

“I thank God for putting a man like Martin Luther King on this earth,” she said. “He fought with love, not with guns. He changed their minds and their hearts. Some people didn’t like him, so he left us too soon. But he left behind a dream, too.

Remember Martin Luther King not just during the month of February, remember him all the time and make it a point to go out and do something good everyday.”

Mayor Sikes was the next speaker with a speech and proclamation.

“You must seek out people – love is easy and free,” Sikes said.

He also let the crowd know that they have accepted a bid to have a new roof put on the educational side of the Stigall Center.

“It’s one of my loves and we’ve spent a lot of time and money to preserve it. It’s a wonderful place for the community,” he stated.

He then gave the proclamation in honor of Martin Luther King and once again urged the young children to read his speeches. 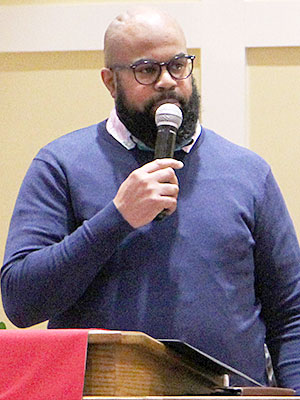 PASTOR PIPKIN – Pastor C. Pipkin made the closing speech during the MLK program at St. James Baptist Church and told everyone that it is always important to share your dreams with others.

Next up was Timothy Adams, president of the NAACP Humboldt/Gibson County chapter, and Pastor C. Pipkin. Adams explained to everyone what the NAACP is and he also spoke of Martin Luther King’s history and achievements.

Closing the program was Pastor C. Pipkin of Milan. When he took the stand, he first thanked everyone for being there. He then read Numbers 12:6, which states, “Then He said, ‘Hear now My words: If there is a prophet among you, I, the Lord, make Myself known to him in a vision; I speak to him in a dream.’”

“Dreams are an important part of many stories and passages,” Pipkin said. “Many dreams include visions of a divine nature and messages from the Lord himself. Martin Luther King had to go through many hardships and it all started because he had a dream. I want to encourage everyone to share their dreams.”

Pipkin also stated that, “God says that he is a spirit and everybody that worships Me must worship Me in spirit and in truth. He does not say that he is black or white.  God chose Martin Luther King and when God chooses you, you have to give up everything for His purpose.”

Martin Luther King Jr. was one of the most important African-American leaders of the Civil Rights Movement and he accomplished many great things during his life. He fought peacefully for what he believed in, for equality and he fought to make the world a better place – all because he had a dream and he instilled that dream into thousands of others. Those who participated in Monday’s march and attended the program at St. James came together to honor that dream and made sure that it will never be forgotten.