Couple has chaired Horse Show for over a decade 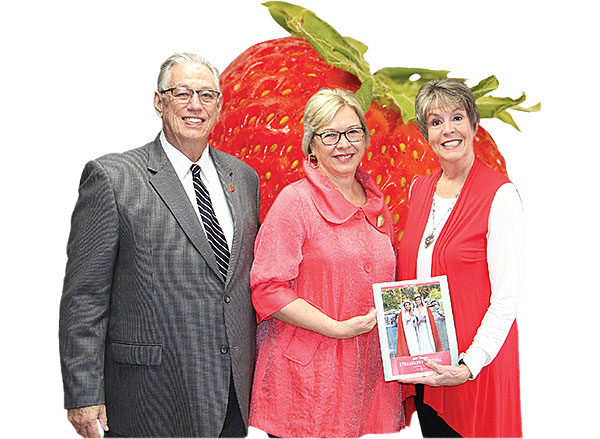 FESTIVAL HONOREES – Betty Langley, president of the 83rd West Tennessee Strawberry Festival (right), proudly announces Fred and Vicki Benjamin will serve as festival honorees this year. The Benjamins are no strangers to the festival, as they have been in charge of the Horse Show for over a decade. The couple has striven to make the Horse Show better every year. Now they will be honored for their dedication to the festival.

With the beginning of the new year brings big announcements for the Strawberry city. One announcement that always comes early in the year is the selection of the West Tennessee Strawberry Festival honoree.

Strawberry Festival President Betty Langley proudly announces this year’s honorees are Fred and Vicki Benjamin. The Benjamins have been involved with the festival for several years, chairing the Horse Show Committee. The Benjamins are avid horse enthusiasts and have led the Horse Show, keeping it one of the top shows in the region.

“As soon as I was asked to be general chairman, you start to think of this and this and this,” Langley said of the choices and selections made by the president. “When I was thinking of my honoree, they came to mind. They have been devoted a long time to the festival and are very deserving.”

Langley said her decision was not very hard. She noted the Benjamins epitomize what the festival is all about. Langley also noted how easy they were to work with last year, which made her decision even easier.

“I was overwhelmed with gratitude to be recognized for what we’ve done,” Vicki Benjamin said. “I’m honored to be part of the festival over the years.”

Langley contacted her general chairman, Sherry Jo Smith, and told her who she was thinking about asking to be the honorees. Smith said, “Oh my gosh, that’s great,” Langley recalled.

But selecting the Benjamins as her honorees almost did not happen. The Strawberry Festival Committee meets every Wednesday, but several meetings were canceled during the holidays. When the committee held their first meeting of the year on January 8, Langley announced who her honorees would be.

Langley and Chamber of Commerce Events Coordinator Beth Culpepper talked and found out the Benjamins were leaving town for two months.

“I called Fred,” Vicki said. “I told him I got a phone call, that we were going to be honorees. He had to get a haircut and have pictures made.”

So within a few hours of being notified they were going to be Strawberry Festival honorees, they were in the Chronicle office being interviewed and left the next day on their trip—talk about a tight window.

“We love doing the Horse Show,” Vicki said. “We try to do something each year to improve the show.”

One of the major improvements was replacing the fence. Fred recalled previous Horse Show chair, Doralyn Lowe, said the fence was probably put up in the 1940s or 50s and that the only thing holding it up was termite poop.

When the Benjamins replaced the fence, they were so proud of the way it looked. It looked better than it had in decades. But, when Vicki asked one of the visitors how she liked the new fence, the lady said it looks beautiful but she could not see over the top rail.

Fred said they had not noticed the height since they only looked at it while standing. But when they sat in lawn chairs, sure enough the top rail blocked the view.

“The next day, Fred and I cut every post down,” Vicki recalled. “We had a sawzall and generator. We spent two days fixing it. There were 100 to 120 posts.”

When the Benjamins took over the Horse Show 13 years ago, the grounds were not in very good shape. But slowly and surely the Benjamins have brought it back to life.

Last year, after raising funds for improvements, they replaced the track at Chalmus Davenport Arena, the home of the Strawberry Festival Horse Show. They purchased and installed an all-weather track. Unfortunately, the wrong material was put down. But the show went on as planned. The riders rode in the grass instead of the track and everything worked out.

After the show, the Benjamins removed all of the wrong material. They contacted the owners of Crown Winery and told them they had a lot of material that could be used for a driveway or parking area. The winery was in need of more gravel, so they purchased the material.

New, correct material was then purchased for the horse track and installed.

“This will be the first year on the all-weather track,” Vicki noted.

The Benjamins are quick to note that it is not just them who make the show the hit that it is year after year. They depend on volunteers. One volunteer who has assisted with the show for probably 60 or 70 years is Willard Hayes. Vicki said he brings the rugs, helps decorate the center ring, sets up and at midnight, helps tear down.

They also receive lots of assistance from the city workers and the sheriff’s department each year. It takes a lot of man-hours to put on a show as big as the Strawberry Festival Horse Show.

Over the years, the Horse Show has morphed into the wonder it is today. In the early years, it was a multi-horse, all breed show totally with lady riders. It was held at the Bailey Park arena, according to the Benjamins.

“Back in those days, transportation was mostly by horse,” Fred explained. “Ladies wanted to show off their beautiful attire and grooming of the horses. Today, it’s an opportunity to show off their Sunday best.”

“Men wear tuxes or suits,” Vicki added. “The women are all blinged out.”

As much as the Benjamins love horses, Vicki said that for her, this was not the case early on. In fact, she was scared of horses. She took riding lessons to build her comfort level.

Now, during a typical Horse Show, the Benjamins are around 100 or so horses each year. When they first took over the show 13 years ago, there were upwards of 190 horses.

“Horses from North Carolina, Kentucky, Missouri, Mississippi, all over, come to the show,” Vicki noted. “People come from all around. Riders and owners fly in from all over. This is the biggest show in West Tennessee.”

The walking horse community has some firm guidelines to abide by.

“The show is sanctioned by the federal government,” Fred noted. “All horses are examined by trained USDA inspectors to make sure they are compliant with the Horse Protection Act.”

Part of the role as Horse Show chairs, the Benjamins are in charge of getting the inspectors scheduled for the Strawberry Festival Horse Show.

Prior to chairing the Horse Show Committee, Fred rode horses in shows for 20 years. But now he has slowed down and no longer shows horses. Vicki participated in country mare shows and was once a world champion.

“We’re looking forward to a fun-filled week,” Vicki said as being festival honorees. “Some events, I may not have been to before. It’s been a long time since I went down the parade route.”

“We’ll get as much done the week before,” Fred said of preparing for this year’s Horse Show. “We will make sure everything is ready.”