It has been a long-standing tradition for the Rotary Club of Humboldt to have the sitting Congressman visit early in January to give the club an update on events from Washington D.C. That tradition continued last Friday when Congressman David Kustoff, representing Tennessee’s 8th Congressional District, spoke to club members and guests.

Rotarian Ken Luckey was the program chair. Luckey’s brother, Jason Luckey, contacted the Congressman’s office and was able to get on Kustoff’s busy schedule for the Humboldt visit. Congressman Kustoff noted the Rotary meeting was his first official function of 2020. 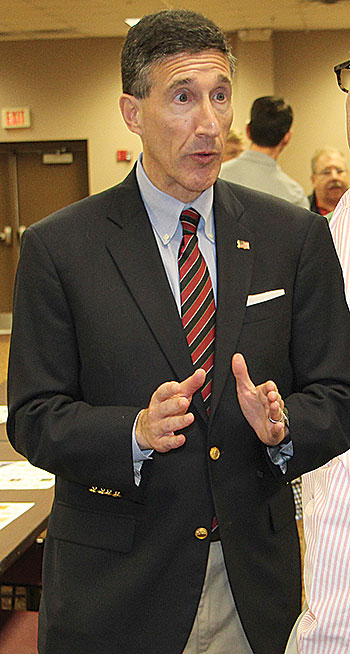 Congressman Kustoff opened by reflecting on 2019. He said that from January through November, Congress got very little done. That all changed in December. Part of the lack of action was due to the Democrats preparing to impeach President Donald Trump.

“On September 25, Speaker of the House Nancy Pelosi started an inquiry into the President,” Kustoff told the club. “They wanted to get it done before the end of the year.”

During a meeting held in a secure room know as a SCIF (sensitive compartmented information facility), which is completely classified, information was leaked to the media within an hour of the meeting. Kustoff said information discussed in a SCIF is not to leave the room. You are not able to discuss any of it whatsoever, with any one.

After weeks and weeks, the House of Representatives finally voted on two articles of impeachment. Kustoff said the vote was almost completely down party lines. Every Republican voted not to impeach. All but two Democrats voted impeach on one article and three on the other article of impeachment.

“From my prospective as a former federal prosecutor, I would never bring a case to court with so little evidence,” Kustoff noted. “You do not want to set a precedence. If you don’t like the President or the election, you can’t have a coup against the President.”

Kustoff also spoke on legislation to stop robo calls. Kustoff said the Senate passed their bill earlier in the year with only one voting in opposition, but he could not get Speaker Pelosi to bring it to the floor for discussion and a vote. Finally in December, she brought the bill to the floor and it passed with bi-partisan support.

Kustoff said last year there were 147-million robo calls in Tennessee. Now the Department of Justice can go after these callers with assistance from the telecommunication companies and the FCC all working in conjunction.

The Congressman praised the United States-Mexico-Canada trade agreement. He said the agreement could translate into 200,000 new jobs for Tennessee.

Agriculture will be one industry to benefit from the trade agreement, according to the Congressman. Kustoff said the 8th Congressional District, which spans a large portion of West Tennessee, has the most agriculture of the nine districts. So this trade agreement should benefit this area.

Moving into 2020, Kustoff said they are paying a lot of attention to what is going on in the world, especially after the drone attack at the Baghdad airport that killed Iran’s second highest-ranking officer, General Qasem Soleimani. Kustoff believes the strike was carried out in part due to the attack by Iran on the U.S. Embassy in Iraq.

“The President acted swiftly—it was the correct decision,” said Kustoff. “Iran, for over 40 years, has tried to intimidate us. President Trump was the first President to punch them back in the nose.”

Kustoff said Iran is also the greatest threat to Israel, the United States’ best ally in that region.

Perhaps the biggest trade agreement could be coming as soon as January 15 when President Trump and the Chinese President are set to sign Phase 1 of the U.S/China trade deal, Kustoff said.

Kustoff noted that the United States’ infrastructure had taken a back seat in 2019 and did not have as much movement as he had hoped. He is hopeful that will change in 2020.

In all, Kustoff believes the United States is in good shape. He said people’s 401Ks had a very good year in 2019, earning around a 22-percent average. The economy is booming, due mainly to the tax cuts. And unemployment is at the lowest rate in 50 years.