A United States Senator made a stop in Gibson County last week. Senator Marsha Blackburn made a quick visit to Humboldt last Thursday afternoon as part of her tour of all 95 Tennessee counties.

Senator Blackburn visited and spoke with the 30-plus attendees prior to addressing the crowd. State Representative Curtis Halford had the honor of introducing Blackburn to the crowd gathered at Crown Winery. 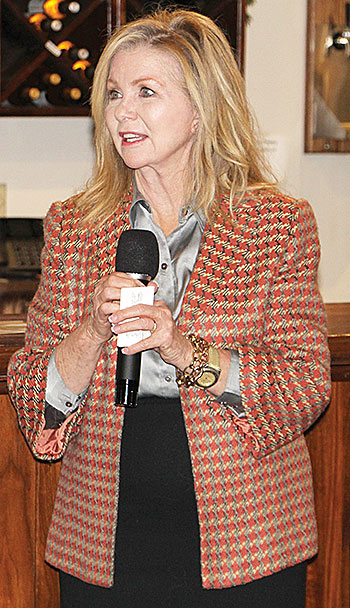 Blackburn opened by saying Friday, January 3, 2020 would be the first anniversary of her inauguration into the United State Senate. Blackburn, running on the Republican ticket, defeated former Tennessee Governor Phil Bredesen for the Senate seat formerly held by Senator Bob Corker who did not seek re-election.

Blackburn said she was especially proud of three bills in particular that will benefit rural America, including Tennessee. This three-bill, Rural Health Agenda, came at the request of small town mayors and local leaders of rural areas struggling to keep their hospitals and healthcare facilities open.

The first element of the Rural Health Agenda is the Telehealth Across State Lines Act, which could lead to a uniform, national best practices, to provide telemedicine across state lines. This act proposes a grant program to expand existing telehealth programs.

The second piece of the agenda is the Rural Health Innovation Act, which features grant programs that can fund the expansion of existing health care centers, such as nursing homes and urgent care clinics, for purchasing equipment, hiring physicians or other staff. Another grant program could expand rural health departments to meet urgent care or triage needs.

The final component of the Rural Health Agenda is the Rural America Health Corps Act. This act encourages physicians and practitioners to set up shop in rural areas. In return, the bill includes a student loan repayment program that could completely wipe their student loan debt clean. The medical professional must agree to serve at least five years in a rural area.

Another bill Senator Blackburn discussed is the Internet Exchange Act. Blackburn co-sponsored this bi-partisan bill, along with Tammy Baldwin, Democrat from Wisconsin. This bill will help improve internet access into rural areas by removing barriers.
Internet Exchanges are physical locations where networks come together. This allows subscribers of different internet service providers to communicate with one another.

“This is good news for our farmers,” Blackburn said. “Especially our soybean farmers.”
Local farmer Jason Luckey was happy to hear this announcement after waiting for two years on the trade agreements.

Senator Blackburn said her biggest accomplishments in her first year have been addressing the things Tennessee wants, such as keeping the tax cuts, addressing the southern border and working on the trade agreements.

“That’s what Tennesseans want,” she said.

Senator Blackburn was also proud of her first bill, which was a pro-life bill to protect the unborn. The Abortion Provider Prohibition Act would deny federal dollars to be used to fund abortion providers, such as Planned Parenthood.

“Tennesseans and the American people do not want their tax dollars funding abortions,” Senator Blackburn said. “They have made this position clear time and again. Hardworking taxpayers do not want to subsidize the business of abortion providers and entities such as Planned Parenthood.”

Her top priorities going into her second year as a U.S. Senator are to keep moving forward with technology and the Rural Health Agenda. She would like to see these vacant hospitals and health care facilities revitalized, possibly into drug treatment centers or mental health centers. This would create jobs as well as provide a much-needed service.

Blackburn did not talk very much about the impeachment process. She did say that the Senate is still waiting for Speaker of the House Nancy Pelosi to turn over impeachment articles. Blackburn noted that President Donald Trump is not officially impeached until those documents are turned over to the Senate.

Blackburn believes the impeachment process is dividing attention that should be placed on important matters, such as trade agreements, the economy and other topics the American people think should be addressed.