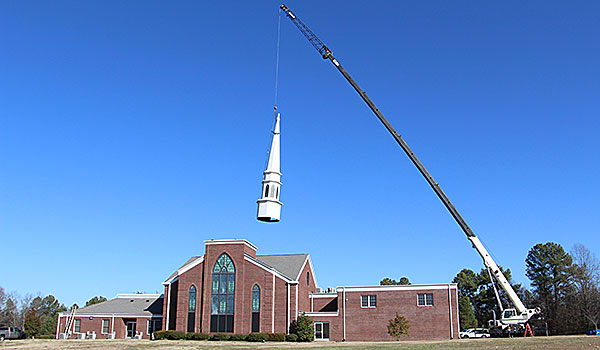 STEEPLE COMES DOWN – Last Thursday, a crane crew lifted and removed the steeple from First Evangelical Presbyterian Church. A windstorm a couple of years ago that hit the steeple caused the roof underneath it to leak and had to be repaired. The church is weighing its options of whether or not to reuse or replace the steeple, or to go a different route and build a gabled roof with a cross on top.

Last Thursday, First Evangelic Presbyterian Church got a haircut. The 40-plus foot steeple was removed.

Murry Greer, church administrator, said there were some issues with the steeple, forcing it to be removed. Greer said Mother Nature had not been friendly to the steeple that towered over 80 feet from the ground. He said the roof where the steeple sat began leaking. He suspected high winds a couple years ago were the culprit that made it become a little unstable.

This allowed water to begin seeping in and dripping into the church. It was determined the steeple had to be removed in order to repair the roof. Greer said they are not sure if the steeple will be reinstalled or not. They are weighing their options.

One option Greer said was on the table, is to build a gable roof on top of the flat section where the steeple once stood. Then another steeple could be erected or perhaps a more simple solution of having a cross.

Greer, other church officials and members were not happy about removing the steeple, but for safety purposes, it had to be done. Another reason to have it removed was to potentially protect the stained glass windows at the front of the church building that sit directly underneath the 2,500 lbs. steeple. Greer said those windows are over 100 years old and have a lot of history. They were removed from the former church building in downtown Humboldt at the corner of Main St. and Central Ave. That building is now Magnolia Manor.

The current church, which sits at the corner of Presbyterian Dr. and Carriage Lane, was built and first opened in 2005.