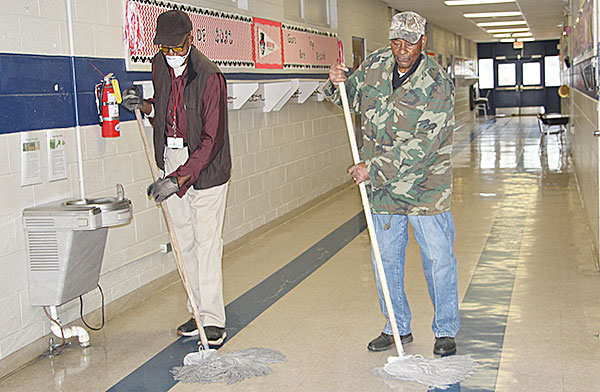 SQUEAKY CLEAN – With rising numbers of students out sick with the flu and other illnesses, school officials decided to close school last Thursday and Friday. This allowed the school’s custodial team to sanitize and disinfect the buildings and buses. Carly Jones (left) and Willie Beverly mop the floors at East Elementary School last Friday. Charles Broyles, custodial supervisor, said all three custodial teams from each school combined as one team and cleaned each school, one at a time, to prepare to reopen school Monday.

Humboldt students received an unexpected break from school last Thursday and Friday. But for many, it wasn’t a pleasant time due to the flu epidemic spreading through the schools.

Last week, director of schools, Dr. Versie Hamlett, made the decision to suspend school on Thursday, December 12 and Friday, December 13 due to the number of students absent due to the flu and other illnesses. 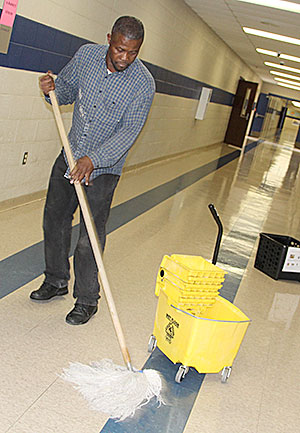 SANITIZING – Steve Dotson finishes up a long hallway at East Elementary School last Friday morning. All three schools in Humboldt were cleaned and sanitized due to the large number of students with the flu, forcing schools to close last Thursday and Friday.

“For Monday, Tuesday and Wednesday, our student absentee rate continued to increase from 14-percent, 24-percent to 27-percent,” Dr. Hamlett said Friday morning. “The regional epidemiologist confirmed the flu had spiked in our area. As a precautionary measure, schools were closed to protect our faculty, staff and students from further illnesses.”

Dr. Hamlett and school staff took pro-active measures to help reduce the possibility of spreading the flu, which could have created even more student and teacher absences. Closing the schools allowed the custodial staff time to completely sanitize all three schools—Stigall Primary School, East Elementary School and Humboldt Jr./Sr. High School, as well as the Board of Education Central Office and all school buses.

When numbers of students getting the flu increase so quickly and drastically, it is not unusual for any school district to take extreme measures to keep students and school staff from getting sick and slow down the flu or other diseases from spreading further.

Kevin Morris, regional epidemiologist for the department of health for West Tennessee said last Friday that they have seen a spike in the number of flu cases in Gibson County and the surrounding three or four counties over the past five or six days. Morris said this is unusual for this time of the year. February is typically when flu cases hit the highest numbers.

“It’s not too late to get the flu shot,” Morris noted. “With the holidays coming up, you need the protection.”

Morris said there are four strains of flu in this year’s vaccine. There have already been 9,000 flu related deaths this flu season in the United State and flu season is in its early stages. Last year, there were 30,000 deaths from the flu, which was larger than normal, Morris said.

“These illnesses are impacting our entire community,” Dr. Hamlett said last Friday. “We want our students well and look forward to seeing everyone return on Monday, December 16, 2019.”