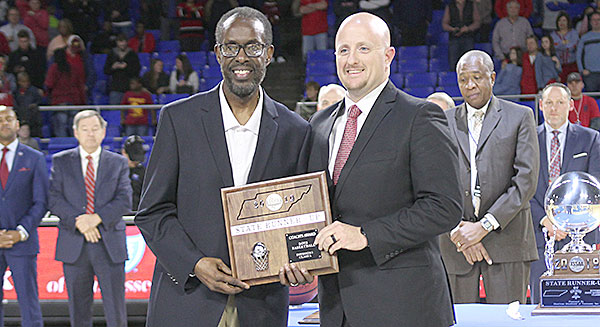 TOP COACH – Humboldt Viking basketball coach Ron Abernathy (left) has been named TSSAA Boys Basketball Coach of the Year for the entire state. Abernathy, in this file photo taken after the state championship game in Murfreesboro earlier this year, will now compete against eight other coaches for the Southeastern Coach of the Year award.

A Humboldt coach has received the highest honor in the state of Tennessee. Humboldt High School head basketball coach Ron Abernathy has been named Boys Basketball Coach of the Year.

Tennessee Secondary School Athletic Association (TSSAA) notified Abernathy and school officials of the honor last month. The award is for all classifications combined in the state, not a district, region or division category.

“It’s beyond believable,” Coach Abernathy said of winning the award. “I’ve won coach of the year at Louisville, Ky., been NCAA Assistant Coach of the Year a few times, I’ve won the Chronicle’s (Best of the Best) coach of the year multiple times. But this tops them all.”

With being named coach of the year, TSSAA has submitted Abernathy’s name to the National Federation of High School Associations, according to TSSAA’s press release.

“TSSAA will nominate each of our state award recipients to the NFHS for consideration as Section 3 Coach of the Year,” as stated in the press release. “Section 3 includes the eight Southeastern states: Alabama, Georgia, Florida, Mississippi, North Carolina, South Carolina, Louisiana and Tennessee.”

“Now I’m going up against eight coaches in the southeast,” Abernathy continued. “It’s a small group. When you talk about all the basketball coaches in the state, words can’t explain. I’m blessed.”

On Friday, November 8, a reception is planned for Coach Ab during Meet The Vikings to celebrate his accomplishments.

“I am so pleased for Coach Abernathy and his accomplishment, but I am not surprised,” shared Versie Hamlett, director of Humboldt City Schools. “Coach Abernathy is such a successful coach because he not only teaches the game of basketball, but works with his young men to respect others as well as themselves, show honor and achieve academically.”

In 2014, Dr. Hamlett hired Coach Abernathy to lead the Viking basketball program. At the time, it was the talk of the town as to who would follow in the shoes of the late legendary coach, Thomas Boykin. Abernathy took charge of the team and kept the high standards Boykin had created. It was a seamless transition. The players loved playing for Boykin—the same can be said for Coach Ab.

“He is focused equally on the athletic achievements and academic accomplishments of student athletes and his shared commitment to those goals makes this program so successful,” Dr. Hamlett said. “His young men represent Humboldt proudly on the court, in the classroom and in our community. This is a testimony to Coach Abernathy’s work as a coach and mentor of our youth.”

“It is a pleasure to have a gentleman like Coach Abernathy be a part of our athletic program and our school,” HJSHS Athletic Director George Yarbro said. “He is a good coach that has impacted the game of basketball on all levels. However, what makes him a great coach are the lives he has changed as a result of coaching.”

During an interview with the Humboldt Chronicle in 2014 right after it was announced Abernathy was the new boys basketball coach, he said, “I firmly believe God places you where you are supposed to be. He opens doors for particular circumstances and allows you to walk through that door.”

“I firmly believe championships on the basketball court start with character; character in the classroom, in school and at home,” Abernathy said in 2014. “If kids develop this, it will parley to greater success.”

Abernathy brought a wealth of knowledge and experience to Humboldt, as well as an impressive resume that stretches from coaching fourth graders to NCAA Division I basketball. One of Abernathy’s biggest accomplishments was being a key person in bringing Shaquille O’Neal to play for Louisiana State University (LSU). O’Neal was playing ball in Germany as a high school student while his father was stationed there in the military.

He coached at Shawnee High School in Louisville, Ky., where he had a four-year record of 97-11 with a regional championship and a trip to the Kentucky State Championship.

Abernathy accepted a head coach position with Dixie Hollins High School in St. Petersburg, Fla. While in Florida, he met Dr. Wesley McClure. McClure became president of Lane College in Jackson, Tenn. and later recruited Abernathy to coach the Dragons. His first year at Lane, the team went 6-22. The following year, the Dragons went 22-8 and played in the SIAC Championship game. Abernathy became the winningest coach in Lane history.

After Lane College, Abernathy took another year off. During that year, he coached his son Ronald Abernathy Jr.’s (R.J.) 4th grade team at St. Mary’s in Jackson, Tenn. That team went 15-1. With the success, he was asked to be the athletic director at St. Mary’s Middle School, as well as the girls and boys basketball coach.

In his five years leading the team, the Vikings have gone 63-9 in the district and an overall record of 83-18.

“The discipline, the focus, that allows us to win,” Abernathy said of his coaching philosophy. “We don’t have those 6’6” or 6’8” kids. But we have a system that works. We ask them for good behavior, go to class and be leaders. We won’t give up on them.”

Coach Abernathy is a humble, yet proud man. He has confidence. He instills those qualities and characteristics in his players.

“To be named Coach of the Year for the entire state—it’s phenomenal,” he said. “I can’t take credit. The good Lord is looking down on me.”