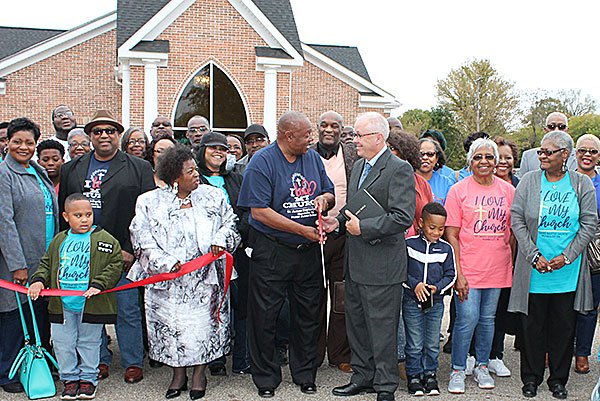 SHARING THE MOMENT – Rev. James Baltimore and Dr. Greg McFadden (holding scissors, left and right respectively) share a spiritual moment as they both cut the ribbon during St. James Missionary Baptist Church’s dedication and homecoming celebration of their bran new church. Baltimore is pastor of St. James and McFadden is pastor of the Church at Sugar Creek.

Sunday was a cool, blustery day in Humboldt. But it was filled with warm hearts when St. James Missionary Baptist Church opened the doors to their new church building.

It was a day of celebration for the members, as well as the community supporters who showed up to stand beside them. St. James has been a long-standing church in Humboldt for over a century.

On Sunday, there was joy in the air as many of the church members began the day at the Senior Citizens Center. Rev. James Baltimore and his congregation had been using the Senior Citizens Center for their Sunday services ever since their previous church building burned in December of 2017. He thought it was fitting to begin the celebration at the center and conclude at the church.

Rev. Baltimore, on more than one occasion, has openly thanked Humboldt Mayor Marvin Sikes for allowing them to use the center to hold church services. He said Humboldt as a community, always has each other’s backs.

CONVOY OF CARS – Dozens of cars paraded down Main Street Sunday afternoon during St. James Missionary Baptist Church’s celebration of their brand new church building. The convoy of cars began at the Senior Citizens Center, where the church has held services since their previous church building was destroyed by fire in December 2017.

At 2 p.m., sirens began to wail and a convoy of cars trekked from the Senior Citizens Center to St. James. With a police escort, vehicle after vehicle paraded down Main St.

Once arriving at the church, the program began. The Humboldt Chamber of Commerce held a ribbon cutting ceremony. Executive Director Amanda Love gathered the crowd together in front of the church for the ceremonial dedication.

RIBBON CUTTING – A large crowd attended the dedication and homecoming celebration of the opening of the new St. James Missionary Baptist Church building. A ribbon cutting ceremony was part of the day’s commemorative program.

Camera flashes were going off everywhere as Rev. Baltimore cut the ribbon, marking a new beginning. It was a momentous time, not only for St. James, but for Humboldt as a united community.

After the ribbon cutting, the doors opened and everyone entered the new sanctuary, seeing all its glory for the first time. Church members and guests were in awe as they entered. With Rev. Baltimore on stage leading the singing, ‘hallelujah’, ‘praise Jesus’, ‘praise the Lord’ and ‘amen’ were some of the words heard from the crowd as they walked through the front doors of the church. 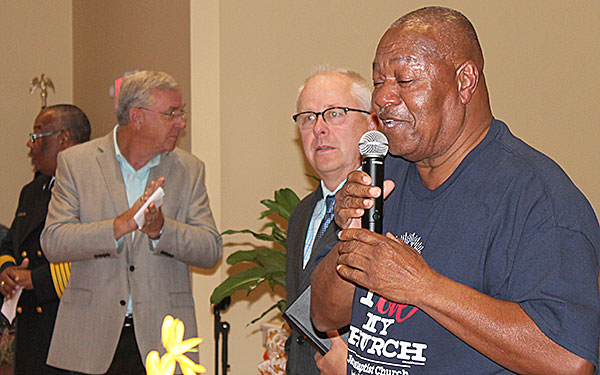 Once inside, Rev. Baltimore briefly spoke, often times doing all he could to hold back the tears of joy. He read scriptures and led singing.
Dr. Greg McFadden, pastor of the Church at Sugar Creek (formerly First Baptist Church), led the service. St. James and First Baptist have a long history. In 1889, First Baptist Church donated the property where St. James’ first church was built.

It was very fitting to have Dr. McFadden and Rev. Baltimore standing on the stage, side by side, continuing the unity that began over a century ago.

It was a glorious day for Humboldt. Often times when a tragedy strikes, it pulls a community closer together. After St. James’ church burned almost two years ago, the healing from the loss was complete with a dedication of a brand new church, standing tall on Main St. in Humboldt.