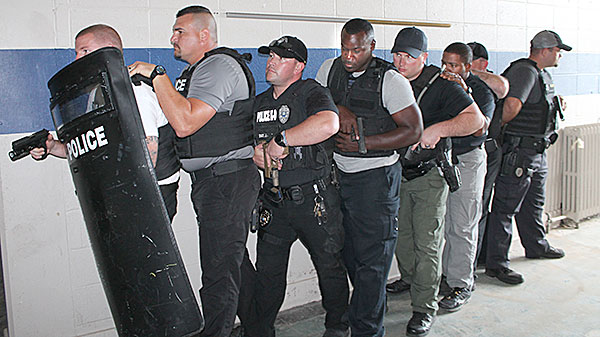 ENTRY LINEUP – Police officers from various cities in West Tennessee were in Humboldt last week for Special Response Team training. HPD Lt. Heath Smith led the training session, which ran for four days and nights. Here the officers form a single line behind the shield as they enter a hallway in search of an armed and dangerous suspect. The last man in the line is a lookout that watches the line’s back side.

Law enforcement agencies all work together to fight crime. Often times they come together for training as well. Last week, several policemen from various cities came to Humboldt for training.

Special response teams (SRT), sometimes known as SWAT (special weapons and tactics), are the first line of defense when a crisis arises. In today’s world, school shootings, church shootings or other senseless acts are happening more and more. Having trained professionals is key.

“We train twice a year and invite other agencies across Tennessee,” Smith said. “Teaching officer safety is important.”

A byproduct of the multi-agency training is getting to know officers from other cities. It is helpful to have familiar faces when agencies come together during an emergency situation. Police and sheriff departments are constantly sharing information and working together.

Some of the various phases of last week’s training included active shooter, possible threats to schools or churches, first aid and other specialized training. Each scenario has proper protocol as to how to advance. Sometimes the threat means the first officer that arrives goes in to protect people’s lives, such as a school shooting. Other scenarios, no one goes into a situation until the team has assembled. It all depends on the type of threat and the scale.

Smith said often times, it’s the show of force by an SRT that is enough to diffuse a situation. Just having the team onsite with all their firepower lets the perpetrator know what could happen if they resist. Smith said many times the suspect gives up peacefully without incident. This is the outcome law officers hope for.

“We don’t want to go in and shoot up the place,” Smith explained. “We are trained to do that if it comes down to it, but we want the suspects taken in peacefully.”

During training last week, the team utilized various locations, both day and night. They used the old junior high school on Ferrell St., a local church and other areas to mimic situations in which a threat could take place.

It is good to know that local law enforcement personnel from various cities and counties are coming together to get the training needed to do their jobs. It is training officers hope they never have to use out in the field, but none-the-less, if or when a situation arises where force is needed, they are trained and know what to do. 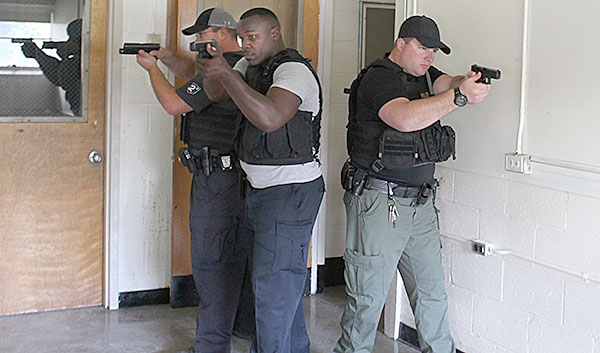 HIGH RISK THREAT – During special training last week, three officers enter a room with a high risk threat. Officers are on point stationed left, center and right to cover the entire room. Lawmen from across West Tennessee were in Humboldt for the 4-day training course.

Covington up to No. 4 in West Tennessee football rankings after Week 5