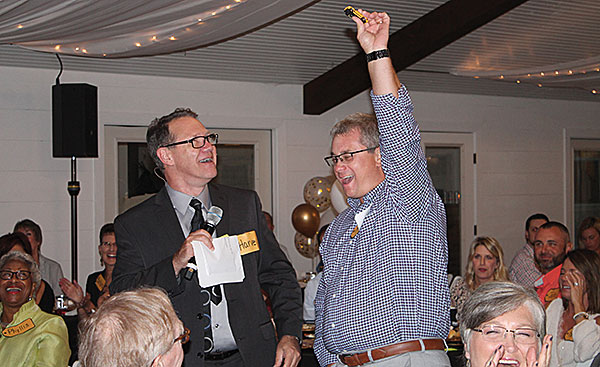 A NEW CAR – Michael Longmire is stoked after winning a new car (in his hand) during one of the game show themed games at last Thursday’s Chamber Membership Celebration. Emcee/game show host, Harvey Boyd, had the crowd laughing all evening long. Some lucky winners walked away with very nice gifts while others, like Longmire, got the gag gifts, which made the night so much fun.

For those who were unable to attend last Thursday’s Chamber Membership Celebration, they missed a treat. This year, Amanda Love, Beth Culpepper and Syndey Crews took the annual banquet to a new level. 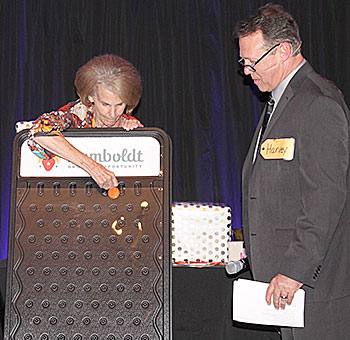 PLINKO WINNER – Lyla Dee Davidson drops one of her two Plinko chips into the Plinko board. When her chips landed in the bottom slots, she was the big winner out of the six playing and won $65 in chamber bucks. Local comedic celebrity Harvey kept the crowd rolling with laughter all night long.

The night was filled with fun and games, dinner and drinks, and prizes galore. Many people walked away with some very nice gifts while others—let’s just say their gifts were not so nice but the gag gift certainly brought many laughs.

Local entertainer, Harvey Boyd, was the perfect person to emcee the event. With a game show theme, Harvey was right man for the job. Harvey and his antics kept the crowd rolling with laughter.

The take off on popular real game shows included “Let’s Take a Deal”, “Plinko”, “The Price is Correct” and “Who Wants to be a Humboldtaire”.

Let’s Take a Deal and Plinko were played by individuals who had their names drawn at random from a basket.
But some games were for the entire table. The Price is Correct included the entire table. A card was placed on each table with five or six store items and the people at the table had to guess the price for each item. After all the tables turned in their card, the results were tabulated and one lucky table walked away with some very nice prizes.

Who wants to be a Humboldtaire was also a table game. In this game, one table was selected to play out of the basket of names. The table had to answer Humboldt trivia questions and with each correct answer, every person at the table received a prize. 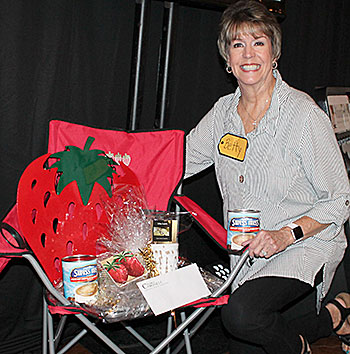 GRAND PRIZE WINNER – Betty Langley was the grand prize winner at the annual Chamber Membership Celebration last Thursday. She won a prize package entitled “Made in Humboldt” that included items made here in the Strawberry City.

The final grand prize of the night was not game related, but luck of the draw. The chamber put together a “made in Humboldt” gift collection of items made right here in Humboldt. Betty Langley was the lucky winner. Director Love said the value of the prize was $350.

As a bonus, scratch off tickets were placed at every place setting on each table. Everyone attending had a chance to win a prize.

Prior to all the fun and games, the evening began as guests arrived at Twin Oaks. Social hour at 5:30 p.m. with drinks and a photo booth made for a enjoyable opening to what was to come. At 6:30, the dinner buffet line was opened. Salad, tenderloin, chicken, mac and cheese, green beans and rolls were provided by chamber member, Clark Shaw’s Old County Store. Desserts of cobbler and banana pudding were served inside the banquet room.

After dinner, Love recognized the current chamber board of directors. She then asked the out going directors to come forward to receive gifts for their time serving on the board.

All in all, it was a marvelous event from beginning to end. As guests were leaving, you could still hear laughter in the air. 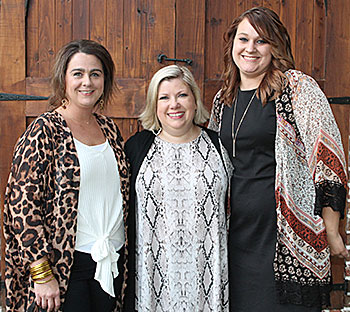 CHAMBER LADIES – The ladies at Humboldt Chamber of Commerce (from left) Beth Culpepper, Amanda Love and Syndey Crews paused from a hectic evening for a photo opp during the annual Chamber Membership Celebration last Thursday evening at Twin Oaks. The evening was filled with fun and games, dinner and drinks, and prizes galore. Several attendees said it was the best chamber banquet they had attended.