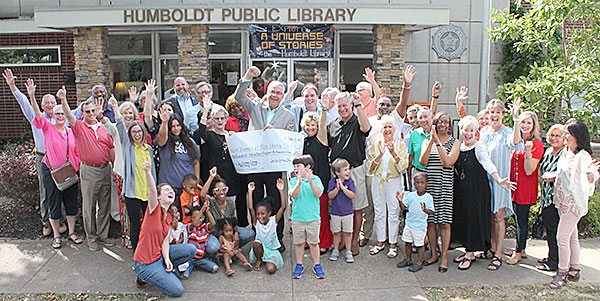 CELEBRATING CHECK – A big crowd of Humboldt Public Library supporters came together last Thursday to celebrate a large donation to be used for the new children’s library. The late Carolyn Carter, who truly loved the library, designated in her trust to leave almost $120,000 to the library. Theresa Kennedy, cousin of Carter, presented the ceremonial check to Mayor Marvin Sikes and the library staff.

Through a very generous donation from the trust of a dedicated supporter, the Humboldt Public Library is one step closer to funding the proposed children’s library expansion. Plans are to add 2,200 sq. ft. onto the existing building for the children’s library.

Last week, a check for $119,196 was presented to help make the new library come to fruition.

In a trust from the estate of the late Carolyn Carter, family members proudly honored one of Carter’s last wishes by helping fund the children’s library. A celebration was held at the library last Thursday afternoon during the check presentation ceremony. Theresa Kennedy, Carter’s cousin, made the presentation with a big ceremonial check. Kennedy said her cousin loved the library and her church. 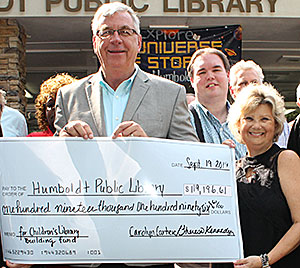 BIG CHECK – Theresa Kennedey (right) presents a check of almost $120,000 to the Humboldt Public Library on behalf of her late cousin, Carolyn Carter’s trust. Carter served on the Library Board of Trustees for many years and was a big supporter of the library. Mayor Marvin Sikes, who was a founding member of Library Foundation Board, is all smiles as he display the ceremonial check during the presentation last week.

Carter was a staunch supporter of the Humboldt Public Library. She served on the board of trustees for six years.

When she passed on August 23, 2018 at the age of 75, Carter had placed in her will that one-third of her estate go to supporting the library. But even before she passed away, Carter generously donated to the children’s library fund.

The library was an important part of Carter’s life and she wanted her legacy to continue on by way of the library.

During the check presentation, Humboldt Mayor Marvin Sikes led the ceremony. Sikes is also a firm supporter of the library. Prior to becoming mayor, Sikes was one of the original board members of the Humboldt Public Library Foundation.

Former library director, Diane Wright, commented on Carter during the celebration. Wright said this money will be a legacy of her love for the library.

When current library director Brittney Keller met Carter, there were several things that were very apparent. Keller said Carter had strong faith, loved her family (including her cats), had a witty sense of humor and supported her library. She gave selflessly of her time and energy by being a library board trustee to better improve the library for her community. Carter consciously made a decision to provide a gift to the library that would ensure that future generations could enjoy the library as much as she did, Keller said.

Linda Hawks serves on the board of trustees. Elna Blankenship serves on both the Friends and the Foundation boards. They explained how all three entities are different, yet share a common goal to support the library, provide for its growth and enhance the services the library provides to the community.

Hawks said the trustees are part of the city of Humboldt. The Humboldt Mayor and Board of Aldermen appoint board members. Trustees oversee funds for the library’s day-to-day operation.

Blankenship said Friends of the Library and the Library Foundation are very similar. Both seek donations to assist with all the wonderful programs provided by the library. The main difference between the two is the amount of money each can accept at a time.

Friends is a statewide program that assists libraries. It is made up of volunteers. When people donate to their library, they become members. Friends can only accept donations or apply for grants up to $50,000.

The Foundation was a spin off from Friends to fill that void. Once the Foundation received 501(c)3 status, it could accept larger donations and apply for larger grants.

Friends’ goals are to raise money to provide services and projects over and above what the city, county and state provide, according to Barker. Their first project was to create the internet garden near the entrance to the library, complete with wi-fi, all in a serene setting. Barker said their next project was to assist in the replacement of the library’s windows. Friends’ latest project was their biggest, renovating the front entrance.

When the Foundation formed in 2013, inaugural board members were Dr. Carolyn Stewart, Lynn Allen, Thomas Raines and Sikes. Later, John Hale and Blankenship were asked to join.

The team went to work. They enlisted Lashlee-Rich as construction manager and iDesign Architecture Group to draw up plans. In preparation for the expansion, the city allotted $20,000 for restroom updates and to create handicap accessibility. The price tag for the children’s library was estimated to be $400,000.

Prior to the $119k donation just received, the foundation had raised $96,000 through donations and grants. With the new total of over $200,000, the foundation qualified to apply for a $100,000 matching grant through the Tennessee State Library and Archives. Hopefully, the library will receive the matching funds grant, which would put them over three-quarters of the way to meeting their goal of $400,000.