Humboldt City Schools may have lost its director of schools after Dr. Versie Hamlett’s contract extension was voted down. A packed library witnessed a heated school board meeting last Thursday evening.

Dr. Hamlett’s current contract expires June 30, 2020. She was seeking a 3-year extension at the same salary and benefits.

Close to a hundred people, many of which were parents, community citizens and school personnel, filled the school library. The vast majority were there to support Dr. Hamlett in hopes of her receiving a contract extension.

When the contract extension agenda item came up, board member Mark Hodge motioned to offer Dr. Hamlett what she asked for—a 3-year extension with the same salary and benefits package. Board member Wayne McLemore seconded the motion. 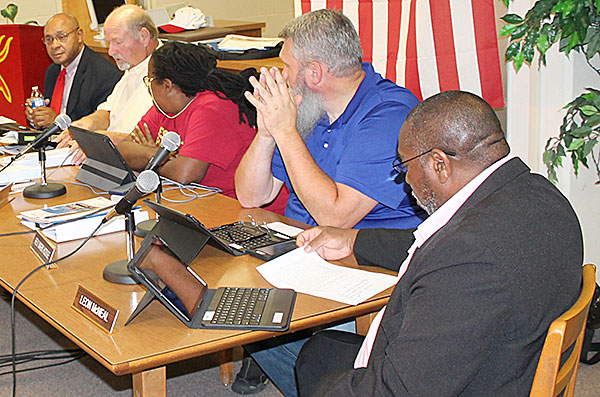 BEFORE THE VOTE – Prior to calling Thursday night’s Humboldt School Board meeting to order, board members look calm and collected. That all changed when the meeting turned into a brouhaha over whether or not to offer Dr. Versie Hamlett a contract extension as director of schools. At times tempers flared, not only from board members but from the crowd of about 100 people who attended to show their support of Dr. Hamlett.

As discussion began, board member Leon McNeal spoke first saying, “I supported Dr. Hamlett for two terms but I’ve been wrestling with it for a while. This board, along with Dr. Hamlett, has failed when it comes down to our teachers, our system, our substitutes.”

McNeal said he has brought up during budget meetings to give teachers better pay. McNeal then changed direction and said the people attending the meeting do not have kids in this school system, alleging they send them to private school.

Next, McNeal held up a stack of papers saying he has a problem with 20 people in the school system accounting for $2,500,000.

At that time, Hodge called for point of order, referring to McNeal getting off the agenda item of Dr. Hamlett’s contract.

But board chairman Terry Johnson refused Hodge’s request and allowed McNeal to continue.

“We are losing these black kids—we got a black school system, it’s black.” McNeal said.

McNeal read from a document he said was from the American Counsel of Educational Association. McNeal stated that in the inner city, more than half of all black men do not finish school.

“I’m dealing with facts from the Education Department of Justice,” he continued. “From the fourth grade, they already set up for prison and the graveyard.”

Hodge was next to continue discussion, “There is so much good that is going on. There is also so much that we are trying to fix and we need to sit at this table and start fixing that. One thing is to not turn everything upside down into a summersault. But that’s also one of the rare opinions at this table.”

Hodge spoke about all kids in the system and dealing with those students who are continually a behavioral issue. Hodge believes there is a way to keep the kids invested and that will make a big turnaround.

“If we could get just as many parents involved as we do professionals in here today, it would instantly turn around,” Hodge added. “Until we get parental involvement helping with these kids, the kids have to take their part and the parents have to take responsibility.”

Hodge then called for question (Robert’s Rules of Order to end discussion and call for a vote).

Board member Valeria Wedley took the floor. She referred to Humboldt schools as barely passing for the past four years.

“In the fifth year, y’all want to turn around and say we are barely failing,” Wedley said. “Barely failing? There is something absolutely wrong with that picture. We are gathering here today to celebrate barely failing.”

“I know a child can be turned around given the right situation,” she continued. “You’ve got to capture every single child. If we capture troubled kids in our community, we’re going to have a better community. I don’t want to live with bars on my windows. We don’t have bad kids. We have kids that need some counseling, some attention, to learn how to deal with anger and to learn how to get their work.”

Dr. Hamlett asked to address the board and asked to pull her contract extension and take it off the agenda.

A murmur among the audience filled the room with her announcement.

One person in the crowd said, “I hope y’all are happy.”

Another asked, “Why would she want to stay if she doesn’t have the support?”

Wedley turned to chairman Johnson and said, “Hit that gavel. I’m just saying to keep them people from having the floor.”

With a motion and second on the table to extend Dr. Hamlett’s contract, a vote was required.

Johnson called for the vote, only to hear many in the audience loudly say, “No” at their disapproval of the board’s action. McLemore called for a roll call vote.

McNeal then addressed the crowd, asking, “How many of you got kids in the system?”

He then stood up and said, “How many?”

Many in the audience fired back saying they did have kids in the system.

One audience member returned the question to McNeal and asked how many kids he has in the system.

Another audience member was heard asking McNeal, “Where’s your diploma?”

Hodge seemed to agree with the crowd saying, “Maybe we do have a good example of what’s wrong with our school system. Maybe some are sitting at this table right now.”

This brought many to clap their hands.

“Look who’s clapping. Why is the clapping biased?” Wedley asked.

“Maybe it’s somebody actually thinking beyond their anger, beyond their emotions,” Hodge replied to Wedley’s question. “Maybe it’s some folks here thinking with their intellect, with what they’ve been taught, with what they’re seeing and wanting to give our kids a better day instead of just doing what we want because we can push our weight around and be boisterous and nobody say a thing about it.”

This brought even more applause from the crowd that was overwhelmingly in support of Dr. Hamlett.

Wedley asked the crowd for applause for the school system making ones and zeros.

“Anybody happy?” Wedley asked. “Anybody happy with 139 out of 140?” (referring to the number of school districts in Tennessee)

When the vote was finally held, Hodge voted yes, Johnson voted no, McLemore voted yes, McNeal voted no and Wedley voted a boisterous, “Absolutely not!”

McLemore shook his head in dismay. He turned to Wedley and said, “I hope you’re happy.”

A few heated moments followed when McLemore packed up his tablet and folder, and walked out of the meeting.

Many of the audience members followed McLemore’s lead and left the meeting.

In all of this, Dr. Hamlett quietly sat at the end of the table, listening to Wedley and McNeal berate her. She kept her cool and did not let her emotions get the best of her, which is a testament to her strength and fortitude. The stoic look on her face was evident.

As the remainder of the meeting continued, Dr. Hamlett’s professionalism showed as she did not let the tumultuous board meeting prevent her from finishing.

Alderman Don Graves signed up to speak during the citizens concern portion of the meeting but chairman Johnson failed to let anyone speak and adjourned the meeting. That did not stop Graves from speaking his mind.

“What the board’s got to remember, what the fine citizens of Humboldt have to remember, is that the schools are a place of discipline and learning,” Graves said as the board did stick around to hear. “If children don’t want to come to school, not behave, not participate, it’s not going to work.”

Graves said it is not the job of one person, as he looked at each board member individually and said, “It is your job, your job, it’s everybody’s job to be sure children are taken care of. It’s not one person’s job. If you’re not on board, you can’t blame our superintendent. She’s doing a hell-of-a job.”

People applauded Graves for expressing his concerns to the board.

“This is a total disgrace and embarrassment to the citizens and the parents,” said Crystal Pankey immediately after the meeting. “I am a parent and a constituent they serve. I urge every registered voter to strongly make their votes heard when each one is up for election.”

Pankey has addressed the board more than once as a firm supporter of Dr. Hamlett, while reprimanding the board for not supporting her.

One audience member loudly announced to vote for George Lorick as a write-in candidate. Lorick is challenging McNeal for the Ward 2 school board position.

With the fired up crowd of Dr. Hamlett supporters hanging around after the meeting, there was talk of seeking a recall for some school board members.

Dr. Hamlett did not make a public statement after being ambushed during the board meeting. The following day, Dr. Hamlett was asked what requests McNeal referred to during one of his tirades.

“It is true that Mr. Leon McNeal has made several requests throughout my tenure. I have done my best to explain to him and work through the impact they would have on our system,” Dr. Hamlett replied. “I also believe many of his requests have been personal in nature, as I am sure people would understand are often not best for the whole district.”

“I have enjoyed my tenure as superintendent here in Humboldt City Schools for the past six years,” she added. “I have always felt blessed to serve the students and the community. My decisions have always been and will always be based on Tennessee State law, Tennessee State Board regulations, my religious beliefs, morals, ethics and values. It breaks my heart that the board did not choose to continue my employment.”