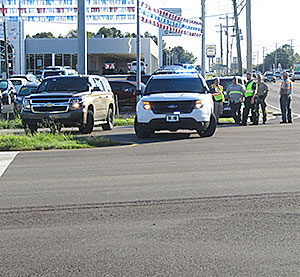 BYPASS SHUTDOWN – Humboldt police and other first responders use their vehicles to shutdown the Hwy. 45W Bypass last week due to a chemical scare at Bongard’s Creameries. Luckily no one was injured and the incident was over in around an hour.

A chemical scare at a local factory had first responders scrambling to get to the scene. A valve malfunction at Bongard’s Creameries released a small amount of anhydrous ammonia.

Chief Kail said they received the call close to 7 a.m. Thursday morning. By the time he arrived, the threat had been aborted.

Kail said Bongard’s has an excellence safety system. When the valve seal on one of the coolers malfunctioned, the alarm immediately went off. Employees knew what to do, according to their safety protocol, where they assembled in the parking lot.

HFD and Bongard’s officials accounted for all employees except the two maintenance workers who knew exactly where to go in the plant to shut down the system. Officials were in contact with the maintenance workers throughout the ordeal. Kail praised Bongard’s and their staff for being properly trained and knowing what to do in the event of an emergency.

The fire department also followed its own protocol and contacted Gibson County Emergency Management Agency. It was decided to call in the hazmat team from Jackson/Madison County. But before the team could assemble and travel to Humboldt, the all clear was given and the hazmat team was called back.

Kail said the fire department and Bongard’s have meters to detect hazardous gases such as ammonia. Both returned a safe reading within minutes of the incident.

Humboldt Police Department officers and Humboldt Area Rescue Squad volunteers were on the site as well. The Hwy 45W Bypass was shutdown from East End Drive to Viking Drive to traffic.

Thanks to the quick response of the Bongard’s staff and first responders, no one was hurt or injured in the chemical scare. If weather conditions were different and Bongard’s staff not properly trained, the outcome could have been much different.