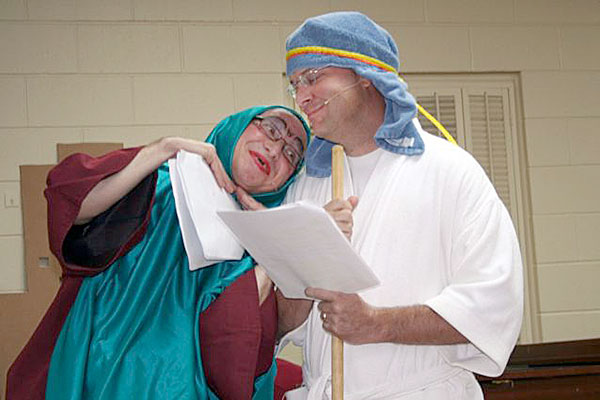 JACOB AND LEAH – One of the most memorable programs of the Humboldt Music Club was preformed by Kevin Hamilton (left) and the late Frank Christie. The program was entitled “Biblical Odd Couple: The Courtship of Jacob and Leah”

Humboldt’s oldest continuously running club has called it quits. The Humboldt Music Club has dissolved due to lack of participation.

The Humboldt Music Club was founded in 1923. The club’s last program on May 16, 2019 was the last official club activity.

Last week, Newell and Janice Pillow announced the club had decided to call it quits. With membership on the downslide, it was becoming harder and harder to put on their quarterly musical programs. Perhaps the straw that broke the camel’s back was the passing of Brenda Scates last January. Scates had been the club’s accompanist for the past several years. Without Scates on the piano leading the rehearsals, future programs would not have had their musical leader.

Pillow, who had served as the club’s official scrapbook keeper and publicity chair, said she has several books of history of the Humboldt Music Club with documents dating all the way back to the beginning in 1923. Most of the documents were taken from old Courier-Chronicle (now Humboldt Chronicle) archives on microfiche at the Humboldt Public Library. Pillow also has many newspaper clippings as well as many photographs of club programs over the years. 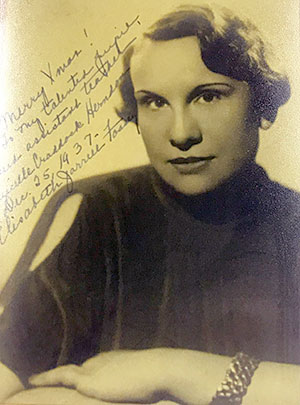 Elizabeth Fossey was one of the first organizers of the Humboldt Music Club.

In those early days, the club met at members’ homes. Some of the names from newspaper clippings included Mrs. J.W. McGlanthen, Mrs. Warner Colinsworth, Mrs. Geo W. Craddock, Mrs. J.A. Pearce, and Miss Nona and Jessie Finley as hosts. Other early members included Nell Craddock, Sudie Dunlap and Sitt Herndon. Elizabeth Fossey, an organist and club member, was one of the first organizers of the Humboldt Music Club.

“In the beginning, it was all classical music,” Pillow said of the type music performed by the club. “They would not only have music, but they had readings.”

Back then, the club was limited to 40 members. It was not an open club for anyone to join. Members had to be invited and a vote was held. It was a social club.

Newell and Pillow said that at some point the club had become a member of the National Federated Music Club but it was no longer federated. Also in the earlier years, a junior music club was formed. It no longer exists.

Over the years, the Humboldt Music Club kept strong membership numbers through the 2000s. But their numbers slowly began to decline. Prior to 2008, the Humboldt Music Club held programs every month. Somewhere along the way, club programs moved from being in members’ homes to holding meetings in churches or other public locations. But with membership falling, the club made a hard decision to go from monthly programs to quarterly programs in August of 2008.

“There just weren’t enough members to perform monthly programs,” Newell noted. “With the changing of times, the club had to adjust.”

It was at that time, the club changed the program format. The monthly programs were only open to members and their guests. Once the change to quarterly programs came about, the club opened the meetings up to the public, hoping to entice new members to join.

When Newell became club president, she held a membership drive and built the numbers up to 35 or so. But not long after, some of those newer members had lost interest and dropped off the role. At the club’s final program last May, there were only 19 active members.

There is a lot of time and effort that goes into presenting a musical program, no matter if it was monthly or quarterly. A typical schedule would be for the program presenter to recruit the members to participate, select the music, decide who would sing which song and the order of the songs. Four to six weeks prior to the program, Sunday afternoons were spent rehearsing.

Newell and Pillow said many of the club members participated in their respective church choirs, which also took up some of their free time. This was additionally thought to be one of the reasons membership was waning.

Over the years, there have been some very good music club programs but there were two in particular that really stood out in Pillow’s mind.
One comedic program featured Kevin Hamilton and the late Frank Christie. The program was entitled the. Christie portrayed Jacob, while Hamilton portrayed Leah.

Another program Pillow said she will never forget was Christie’s Elvis impersonation. Both programs were upbeat, humorous and had very good musical talent.

For Pillow, Newell, and current and past members, dissolving the Humboldt Music Club was a sad day. So many good memories had happened for nearly a century of music. But as the old saying goes, “All good things must come to an end” or you could take a line from Don McLean’s classic song, “the day the music died”, with the sorrowful demise of the Humboldt Music Club.