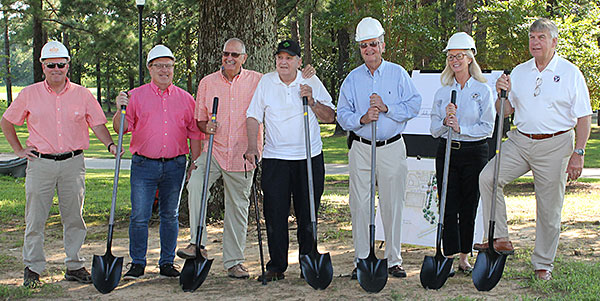 Politicians, dignitaries, guests and residents turned out for a ceremony last Saturday morning. The city of Three Way held a ground breaking ceremony for their new city hall building.

The ceremony began with Mayor Sanders leading in prayer, followed by the Pledge of Allegiance. Next, the mayor introduced the city officials and other dignitaries present at the ground breaking.

After a short speech, the mayor and aldermen, along with several dignitaries donned hard hats and grabbed the shovels, marking the beginning of the city hall.

In November of 2005, Mayor Hill, and aldermen David Turner and Wade voted to purchase the 15-acre site. During the November 7, 2005 city board meeting, Mayor Hill told the audience the property was the perfect location for a city hall, due to it being in the center of Three Way. He also noted it could be used for a maintenance building for tractors, trucks and mowers, and a city park.

Last week, the final phase for the property began. Phase 1 was the construction of the city’s maintenance building, which began in March of 2009 and completed within a few months.

Now Phase 3 is underway. Workers have already done most of the dirt work and construction should begin any day now.

Planning for a city hall building as been in the works basically when citizens voted to incorporate to become a Tennessee city back in 1998. The first city board meetings were held in a front
office of the Madison County fire station located in Three Way. A few years later, a meeting room was constructed on the back of the fire station and is still the location for city board meetings and local elections.

In May of 2018, the city board met with architect Vaughn Associates and construction manager, Lashlee-Rich. After more meetings, a plan was in place.

This prompted the mayor and aldermen to reopen talks on the city hall project. With funding in place and plans already drawn up, the only question was to see if the bids Lashlee-Rich had acquired were still valid. There was a slight increase, mainly due to the cost of materials. The board voted to move forward.

With dirt work underway, construction should begin soon. Hopefully the building can be in the dry by late fall. Interior work would then be able to begin and the city hall ready for business next spring, weather permitting or any other unforeseen issues.

Once the new city hall is completed, board meetings will be held there. The mayor’s office will locate in the city hall as well. 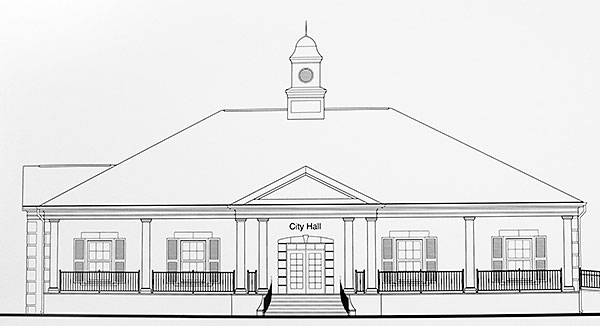 CITY HALL DRAWING – This drawing of the front view of the Three Way City Hall was on display during the ground breaking ceremony. Dirt work has already begun. Construction should be well underway by fall and hopefully in the dry by late fall or early winter. Barring unforeseen circumstances, the building should be complete by next spring or early summer of 2020.