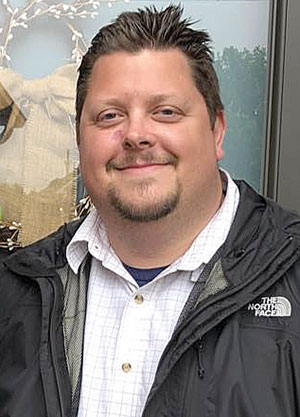 The Humboldt Chronicle is proud to announce Stephen Russell has joined the staff as the new sports writer/photographer. Russell’s duties will be covering Humboldt High School and Humboldt Jr. High School sports, as well as other sporting events.

Russell, who admits he’s a sports-aholic, is eager to hit the ground running. Luckily, his full time job has enough flexibility to allow him to dedicate the time needed to cover Humboldt sports. Russell has worked in the medical field most of his adult life. He is currently the field support manager for Maxim healthcare services in Jackson, Tenn.

“We are thrilled to have Stephen join our team,” said Humboldt Chronicle Editor Danny Wade. “From our very first meeting, I could tell he has a passion for sports. You need that passion, that fire, to write.”

“You will definitely know my love, my enthusiasm for sports,” Russell said of his articles in the newspaper. “I want to paint a picture. I want readers to feel like they were there even though they weren’t.”

Russell said he is excited about meeting the players and the coaches. But he’s most excited to watch the kids grow.

“I want to see these young people grow,” Russell explained. “When you get a kid who is passionate, they will grow. It’s not just sports; it could be music or anything. I want to see that evolution.”

Russell comes from a sports family. His mom, the former Brenda Ward, is from Humboldt. His uncle, Danny Ward, was a star baseball pitcher from Little League, to Babe Ruth and later as a Humboldt Viking. Russell’s grandfather, J.W. Russell, was the boys and girls basketball coach at Dyer High School back in the day.

Russell himself competed on the gridiron. He played two years of football for Jackson Central-Merry before transferring to South Side where he played his junior and senior years.

“I still keep up with South Side but I also focus on South Gibson County,” Russell said of his Alma Mater and now where his son attends school. “I’m a Tennessee Titans season ticket holder and we’re a Big Orange (UT Volunteers) family.”

Russell and his wife, Amber, were high school sweethearts and have been married for 17 years. Their son, Logan, played football and baseball at South Gibson but is now totally focusing on baseball and left football behind. Their daughter, Mylei had played soccer but traded in her cleats for ivory playing the piano.

With their children involved with sports, Russell invested in a nice camera. He learned how to operate a camera and how difficult is it to “catch” the action. Prior to being hired, he emailed several action shots he took of his son on the baseball diamond.

Russell himself has a musical background. As a teenager, he sang in the choir and later joined the choir at Jackson State Community College. But the college choir and theatrics weren’t in the cards for him. One day someone asked if he sang rock music. Russell said he liked rock music but had never sung it. So he gave it a try and had some success.

Russell said he has traveled all over the country and locally as a lead singer.

“When Logan came along, I put music on the back burner to take my career seriously,” Russell noted. “I had my priorities to provide for my family and music wasn’t the way to go.”

Now, as the new sports writer, Russell dove right into the deep end. With the beginning of the new school year, he and Wade attended the coaches meeting at HJSHS on Thursday, July 25. Wade and Russell were given a few minutes to speak with all the coaches about the upcoming year and the sports coverage in the Chronicle. Russell and the coaches exchanged contact information and he made contact individually with the football coaches since the season is right around the corner.

This week, Russell will get his first action as sports writer/photographer with team pictures scheduled and Meet the Vikings on Friday, August 8 at 6 p.m. at Barker Memorial Stadium. Jamborees are scheduled next week as well, with the Jr. high and high school football games quickly approaching.

“This is new to me but I’m eager,” Russell said of his new position with the newspaper. “I’ve always loved to write.”