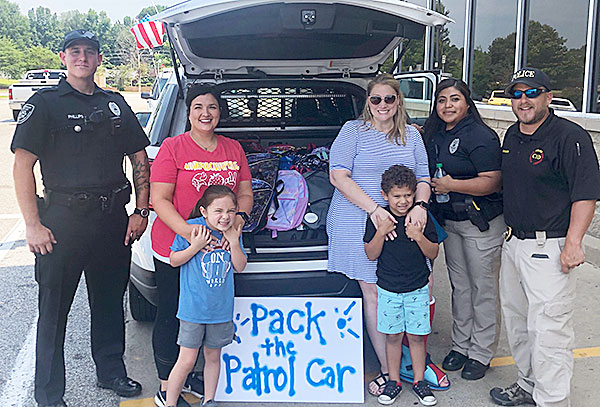 PACK THE PATROL CAR – The Humboldt Police Department partnered with Humboldt City Schools last Saturday for Pack the Patrol Car. One of HPDs patrol vehicles was parked in front of Walmart where people dropped off schools supplies for Humboldt students. Among those assisting during the day are (from left) Ptl. Shane Phillips, East Elementary School counselor Misty Lewis (with daughter Ryman Lewis, principal Brittanie Doaks (with son Kingston Doaks) Ptl. Laura Cano and Sgt. Jonathan Wilson, who spearheaded the project.

The Humboldt Police Department is on board with helping students in the Humboldt City School System this year. With the tax-free holiday this past weekend, the HPD thought it was the perfect time the host their first ever “Pack the Patrol Car”. 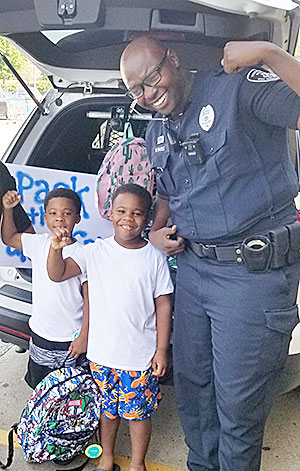 The police department knew there was a need for back to school supplies so they contacted the school district and Helping Hand to see what the biggest need was. They were told backpacks. Sgt. Jonathan Wilson spearheaded the project to collect school supplies, mainly backpacks.

On Saturday, the Humboldt Police Department teamed up with Walmart to make it as convenient as possible for shoppers to help give back. A police cruiser with balloons tied to it was parked in front of the store from 9 a.m. to 4 p.m. for people to pack it with backpacks. Inside the store, there was an array of backpacks for all ages at both entrances to choose from.

This being the first year for the event, the department did not have any expectations. Through everyone’s generosity, the event was a huge success. The police department received 143 backpacks, well over $100 in school supplies donated and $800 in monetary donations to purchase more backpacks.

“A huge thank you to the community for the donations in making this such a great success,” said Sgt. Wilson.

Helping Hand has also been taking donations for back to school supplies. They have had great success with receiving supplies for students but are still in need. Helping Hand will continue to receive donations throughout the year.

The Humboldt Police Department is no stranger to helping children.

Every year they participate in Shop with a Cop around Christmas time, so adding ‘Pack the Patrol Car’ to help out with education and students is nothing new for the department. 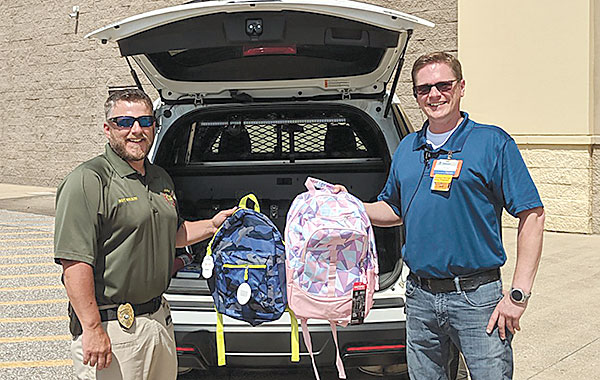