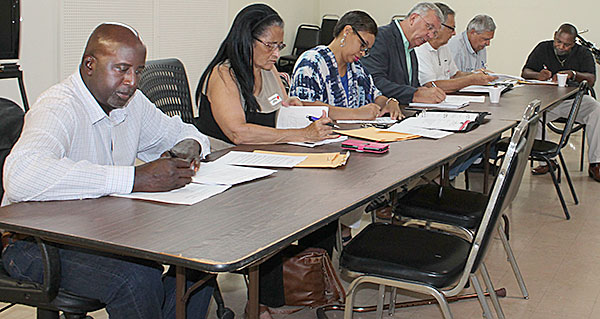 BASEMENT MEETING – The Humboldt City Board meeting had a new venue last week after they were forced to move from the courtroom on the second floor of the Municipal Building to the basement. Court was still going on that Monday evening so the mayor, the board and audience members went for Plan B, using the basement to hold the bi-monthly meeting. Board members are (from left) James Shivers, Donna Johnson, city secretary Marquita Patterson, Mayor Marvin Sikes, Don Graves, Bob Pruett and Leon McNeal.

The Humboldt City Board meeting last week hit a speed bump before the meeting ever got started. Typically, board meetings are held in the courtroom on the second floor of the Municipal Building. Unfortunately, court was still in session when the 5:15 p.m. meeting was to begin.

A quick change of plans moved the meeting to the Municipal’s basement. Once everyone was in place, the meeting went on as planned.

The first item of new business was approval of an ordinance. Mayor Marvin Sikes presented Ordinance 2019-05, an ordinance to allow transfers between line items within the total amounts of each budgeted fund. City treasurer, Kim Hadley, explained the request for the change.

Hadley said transferring funds within the same department is not unusual and typically requires a budget amendment. By approving the transfer between line items keeps the overall budgeted amount in each particular fund the same.

Alderlady Donna Johnson asked if this would allow money transferred between departments. Mayor Sikes and Hadley said it does not.

Hadley said a budget is a projection of spending. Sometimes the budget amount approved by the board is not enough—sometimes it is more. The ordinance will allow line item overages to be transferred to another line item within the same fund to cover a deficit.

The board unanimously approved the first reading of the ordinance. A second reading must be approved before the ordinance is adopted.

Another item on the agenda was a request for a beer permit. Samwail Nasr applied for the permit for carry-out only at Q Mart – Superway.

In a letter from Humboldt Police Chief Reynard Buchanan, the chief recommended Nasr not be approved for a beer permit. The letter stated Nasr was charged with selling alcohol to a minor in Jackson, Tenn. on June 26, 2018. Other than this offense, Buchanan stated there were no outstanding warrants and both references spoke favorably of Nasr.

McNeal made note of the chief’s letter stating Nasr was charged with selling alcohol to a minor but it said nothing of being found guilty.

Assistant Chief Dan Ables told the board that Chief Buchanan said there was a guilty plea and his biggest concern was selling beer to a minor.

Nasr addressed the board and responded to their question. He said at the time of the violation, he was on the phone with his wife who was having a baby. Nasr admitted he did not check the person’s ID and it was an honest mistake.

City attorney, Randy Camp, questioned Nasr about the process. He asked Nasr if he went to court, which Nasr said he did, and he plead guilty to the charges. The beer license of the Jackson business was revoked for 30 days, Nasr said.

McNeal seemed torn over not approving the beer permit but stood firm on never selling alcohol to minors.

Mayor Sikes told Nasr to get with Assistant Chief Ables to see if there could be another representative to apply for the beer permit.  Nasr and Ables talked after the meeting was over.

Next on the agenda was the resignation of a police officer. Anthony (A.J.) Hodge submitted a letter of resignation to Chief Buchanan. That letter was presented to the board.

In the letter, Hodge stated serving Humboldt had been an amazing privilege and an honor. He said he was grateful for the experiences and friendships acquired and that the Humboldt Police Department will always be home and holds a special place in his heart.

Mayor Sikes and Assistant Chief Ables said Hodge had been with the force for about three years and he had accepted another job with the Crockett County Sheriff’s Department.

Ables said Hodge and his family live in Crockett County and he wanted to work closer to home.

The board approved Hodge’s resignation.

The Humboldt Board of Mayor and Aldermen meets the second and fourth Monday of each month. Meetings are held in the courtroom on the second floor of the Municipal Building at 5:15 p.m. All meetings are open to the public.