Hosted by the Humboldt Chamber of Commerce, Kustoff spent time chatting with many of the guests before and after he offered a brief update on happenings in Washington D.C. 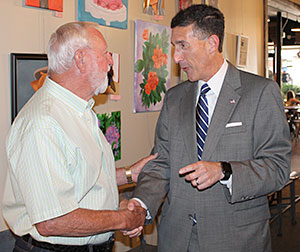 The congressman opened his speech saying last week was a “loud week”, talking about President Donald Trump and the four female congress representatives, Alexandria Ocasio-Cortez, Rashida Tlaib, Ayanna Pressley and Ilhan Omar, and all the national media attention given.

The first topic Kustoff talked about was the economy. With Tyson representatives attending the meeting, the congressman recognized them and thanked Tyson for what they are doing for Gibson County and West Tennessee.

“I can’t wait for December of 2020,” Kustoff said of the projected date the Tyson processing plant will open.

Kustoff said the economy has been on a roll the last three years. He noted that congress worked two years ago on tax cuts and the Jobs Act that helped the economy grow. He gave credit to President Trump. This year, 224,000 new jobs have been created and unemployment is the lowest it’s been since 1969 at 4-percent. Kustoff said since President Trump was elected, 1.5 million jobs have been created.

Now the challenge the country faces is staffing and hiring a qualified workforce.

“Because the economy is so good, we’re having trouble retaining people, hiring people and finding people who can pass a drug test,” Kustoff noted. “I applaud Governor (Bill) Lee and Curtis Halford in the House for working for Tennessee.”

Kustoff spoke about the current state of Congress with Nancy Pelosi as speaker of the house. He said Pelosi introduced a bill that would raise the national minimum wage to $15 per hour. Kustoff believes with the unemployment rate the lowest in years, employers are competing to fill jobs. Kustoff said small to medium size businesses employers say it would kill jobs.

Kustoff offered data from a recent study of how raising the minimum wage to $15 per hour would affect the country. He said it could cause the elimination of 1.3 to 1.4 million jobs. In Tennessee, it could kill 66,000 jobs alone, according to the study.

The congressman said he doesn’t believe the Senate will even consider the bill and if by chance they do, Kustoff believes President Trump would veto it.

Kustoff spoke about a proposed United State, Canada and Mexico treaty. He said both Mexico and Canada have ratified the treaty but the United States is still debating it.

The new treaty would replace the North American Free Trade Agreement (NAFTA), which served its purpose but is outdated. Kustoff said when NAFTA was passed, it was before the internet purchasing boom.

Kustoff said this treaty would be good for the economy, especially the 8th Congressional District, which has more farmland than any other congressional district in Tennessee. He said Pelosi has not committed to vote on the treaty.

The Mexican border was another topic Kustoff spoke on. He plans to visit the border soon to talk with border patrol personnel and see the detention centers first hand.

“No doubt, there’s a crisis going on at the border,” the congressman said.

Kustoff said border patrol falls under the defense budget, where a Senate bill received bi-partisan approval with an 86-8 vote. A different defense bill came before the House that had significant cuts for the military. Kustoff voted against the House version of the bill.

“We need to protect our military men and women,” he said of his reason for opposing the bill.

He is hopeful the Senate bill will come to the House floor for a vote.

MINGLING – Congressman David Kustoff chats with Danny and Joan Smith as he mixed and mingled with guest at the Coffee Shop last Friday morning. Kustoff held a town hall style meeting to discuss happenings in Washington D.C. as well as talking with people from his 8th Congressional District.

Another topic was about those annoying robo-calls. Kustoff said up to 45-percent of all calls now are robo-calls from anywhere on earth. They are able to disguise the origin of the call.

Kustoff said Congress is working on a bill, working with the phone companies to put an end to robo-calls or at least drastically decrease the amount of calls. He noted the Senate bill passed 97-1, yet Kustoff cannot get Pelosi to bring the bill to the House floor for a vote.

When asked about healthcare, Kustoff said there is little that can be done with a divided Congress.

“Premiums have doubled and tripled,” noted Kustoff. “Deductibles are up around $8,000. What have we got? The bottom line is elections have consequences. I’m not sure we can get anything done in the next year and a half, at least nothing major. We may be able to get small things passed (as it relates to healthcare).”