Utility projects are ongoing at the Gibson County Industrial Park. Humboldt Utilities will provide services to the park.

Last week, the Humboldt Board of Mayor and Aldermen met, and approved two resolutions allowing Humboldt Utilities to move forward with the projects. The board had previously approved letting bids for a new water well to supply the additional need when Tyson Foods is up and running. The board also approved bidding out a new water tower.

The two resolutions approved last week gave Humboldt Utilities the authority to move forward after both project bids had been submitted and winning bidders selected by the Humboldt Utility Board.

Mayor Marvin Sikes presented Resolution 2019-09, which dealt with the new well. It will be located next to Bailey Park at the city’s water treatment plant. 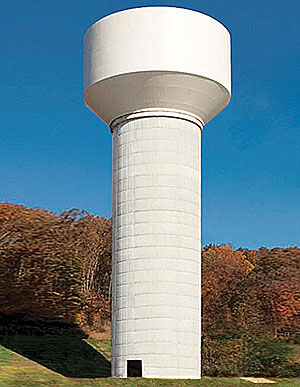 WATER TOWER – A new water tower similar to this will be constructed inside the Gibson County Industrial Park. The 1.5 million gallon tank will supply Tyson Foods and other potential industrial park tenants with water. Landmark Structures out of Fort Worth, Tex. was low bidder for the water tower project.

The utility board selected Marbury’s low bid for the project.

Alderman Leon McNeal asked if Marbury had done work for the city before. Mayor Sikes replied that Marbury had worked on utility projects for Humboldt and had done good work.

The board approved Resolution 2019-09 by a vote of 3-0. Only three aldermen attended the meeting, McNeal, Donna Johnson and Don Graves. Aldermen Bob Pruett and James Shivers were unable to attend the city board meeting.

Next, Mayor Sikes presented Resolution 2019-10, approving bids for a new water tower. Sikes said the tower would be constructed inside the Gibson County Industrial Park on the north end of Humboldt.

The mayor said the water tower would have a 1.5 million gallon reservoir and noted Tyson will use that much water per day once up and running.

The utility board recommended going with Landmark Structures, low bidder for the water tower project.

The city board unanimously approved Landmark as the winning bidder. 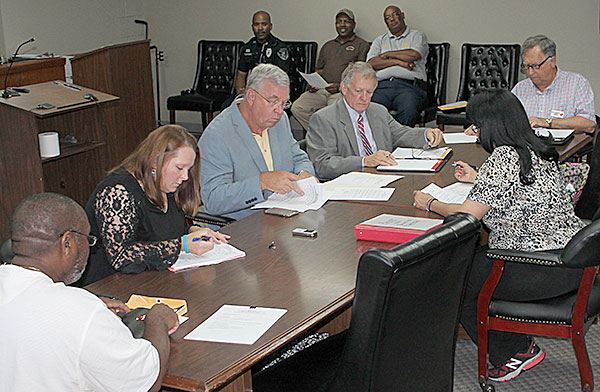 BOARD MEETING – With three of the five members present, the Humboldt Board of Mayor and Aldermen had enough for a quorum and went about business as usual. Two major water projects were approved during the meeting that include a new well and water tower for the Gibson County Industrial Park.

•Humboldt Fire Department Chief Chester Owens submitted his recommendation to hire Jason Hamlett as a new firefighter.
During discussion, Alderman Graves asked if he had been a fireman before.

Hamlett said he had been a volunteer fireman with Lexington and Henderson County.

Chief Owens told the board that Hamlett is certified by the state as a firefighter 1 and firefighter 2. Since he is certified, he will not have to be sent to the academy, saving the city approximately $4,000. Owens said Hamlett has other training experience that will be helpful to the department.

Board members asked when Hendrix could start work, to which Reed replied, tomorrow. With that, Hendrix was approved unanimously as well.

•The final agenda item was the approval of a Humboldt Utility Board seat. Mayor Sikes recommended the re-appointment of Kathleen Smith to serve a 4-year term ending July 1, 2023.

McNeal, Graves and Johnson all praised Smith, who has been a prominent citizen of Humboldt for years. The three approved the mayor’s recommendation to re-appoint Smith to the utility board.