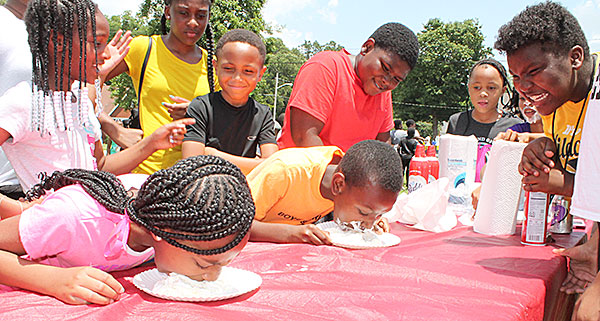 FIND THE WORM – Jayla McCurry (left) competes against Trey Owens (center) in the find the worm contest. Gummy worms were placed on a plate and covered with whipped cream. Contestants had to dive in to grab the gummies with their mouths. No hands were allowed. Jr. staffer Kendya Linsey cheers them on.

Humboldt kids celebrated the 4th of July a day early last week. The Boys & Girls Club of Humboldt enjoyed a pre-4th of July picnic on the grounds last Wednesday. 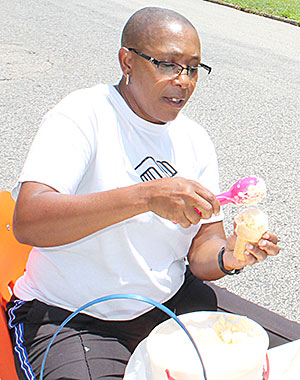 B&G Director Gladys Robinson said the picnic offered an opportunity to show kids the importance of teamwork. She called it a learning experience but with a lot of fun.

“Our staff of 10, along with our eight junior staff, all assisted serving food, crowd control and assisting at the booths,” Robinson said. “We started the day with the morning session just like every day at the club. Then we had lunch—hamburgers, hotdogs, chips, cookies and drinks. All the food was donated by parents.”

That’s when the fun and games began. Game booths were set up in the vacant lot across the street from the club. Humboldt police used two of their cars to block off the street for safety. With 135 kids attending the picnic, keeping everyone safe was a priority.

Games and other activities included:

•Watermelon eating contest pitted boys against the girls to see who could eat a piece of watermelon the quickest. At the end of the day, the boys won.

•Ice cream walk was a take off on a cakewalk. Music would play as kids walked around a circle of numbers. When the music stopped, kids stood on a number. Then a number was drawn at random from a basket. The lucky winner got an ice cream cone.

•Find the worm was a fun game—and a bit messy. Two gummy worms were placed on a paper plate, then covered with whipped cream. Two contestants raced to see who could grab the worms with their mouths. Of course they were not allowed to use their hands so they dove in face-first. After they ran out of whipped cream, they used ice cream.

•Ping pong toss was a hit. Kids attempted to toss a ping pong ball into glasses filled with colored water.

•Ring toss was another challenge. Bowling pins were set up in a box and kids tried to land rings tossed toward the pins. It was not as easy as it sounds but several landed “ringers” on the pins. 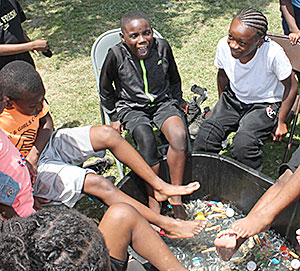 TOE TON – The toe ton game seemed like a fun game on a hot day, that was until the kids stuck their feet in the icy water to retrieve items. Qua Hampton (center) lets out a yell when he puts his feet into the water. Jaylon Hampton (left) decides to give it a try while Tyler Cole is perfectly happy with his feet on the ground and not in the water.

•Toe ton was a game definitely for a hot day. A washtub was filled with ice and items such a small balls, clothespins and others were in the icy water. Kids had to retrieve the items using only their feet. Hands were not allowed.

•The egg race was a sight to see. Large plastic eggs were placed between kids’ legs and they had to pass the egg to their
teammate. There were 15 kids on a team.

•Tug-a-war was not a game for the heat. Only a couple of contests were attempted but it was fun while it lasted.

•Bean bag toss was another competition where kids had to land three in a row.

•Face painting was another hit. Kids love to have designs painted on their faces in such a fun setting.

“Everybody had an excellent time,” Robinson said of the picnic. “After being outside all afternoon, the kids came into the (air conditioned) building where we played three different movies in three different rooms. Some of the kids fell asleep.”

Robinson said the Boys & Girls Club summer program serves between 145 and 150 kids each day, Monday through Friday, 7 a.m. to 6 p.m.

TUG A WAR – It takes a lot of energy for a tug-a-war but these whippersnappers were up to the battle. Eventually, the heat of the day got the best of them.

When school begins, the staff will take a short break to refuel for the afterschool class. During that time, the staff will have training, plus the building will get a thorough cleaning. Robinson said the staff also deserves their own vacation time to rejuvenate and be ready for the school year.

The club will reopen August 12 for afterschool programs.

Practically everyone in Humboldt knows the important role the Boys & Girls Club plays in the lives of the children. These children are the future of Humboldt. Teaching them, growing them and urging them to become quality citizens, while having fun, is among the club’s goals. 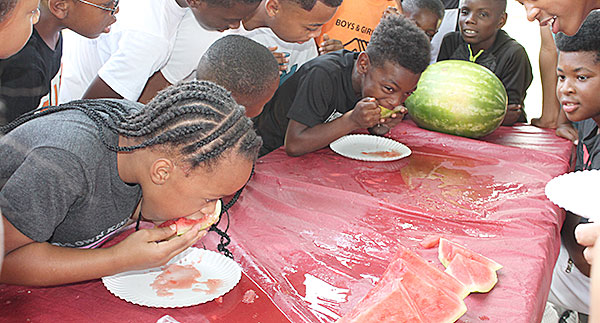 WATERMELON EATING CONTEST – Nothing says 4th of July like a nice, cool, juicy watermelon. Kids attending the summer program at the Boys & Girls Club of Humboldt enjoyed a pre-4th of July picnic last Wednesday filled with lots and lots of fun games. One of the favorites was the watermelon eating contest, pitting boys against girl. Ja’Kiyah Armstrong and Christian Porter go head-to-head in a race to see who can finish a slice of watermelon first. 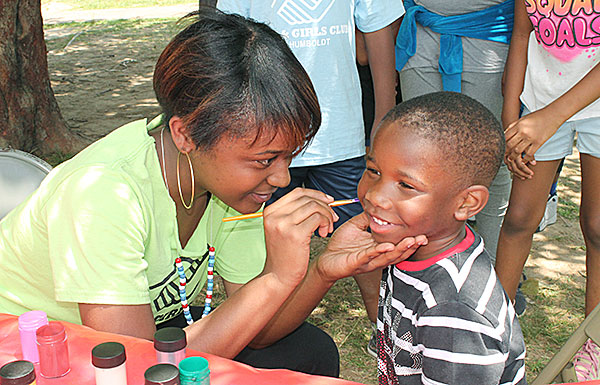 FACE PAINTING – B&G staffer Kiya Garmon puts her artistic talents to work on a hot summer day last Wednesday as she paints the faces of kids attending the pre-4th of July picnic. Among those getting their faces painted was Jaceon Dance. 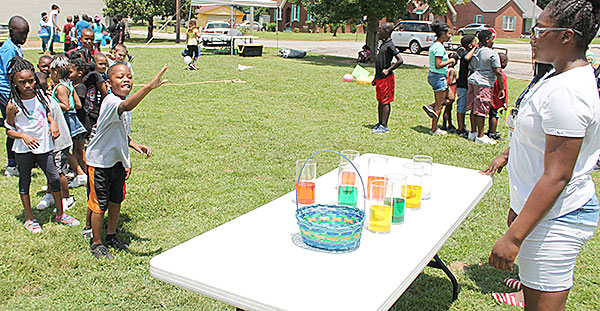 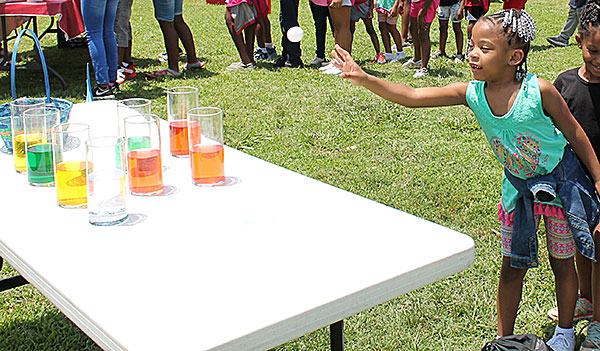 NICE FORM – Camiah Robinson uses an overhand toss technique to try and land her ping pong ball in one of the glasses of colored water. 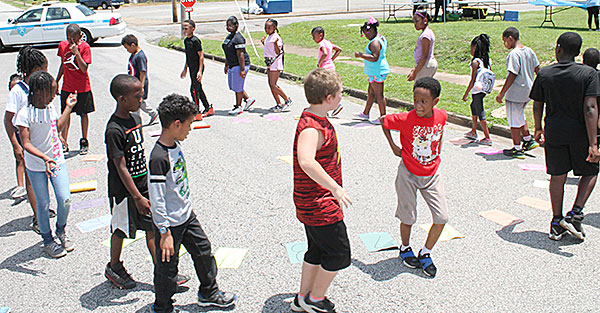 ICE CREAM WALK – Kids walk around the circle of numbers during the ice cream walk. When the music stopped, each kid stands on a number. The winning number received an ice cream cone as their prize. 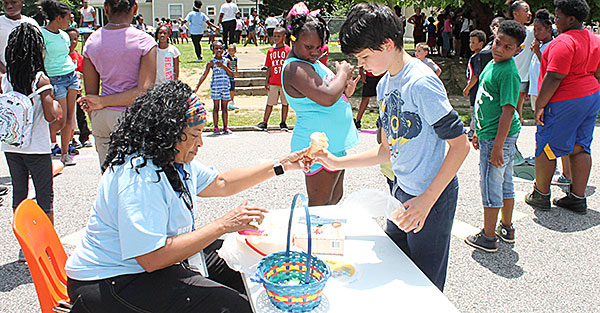 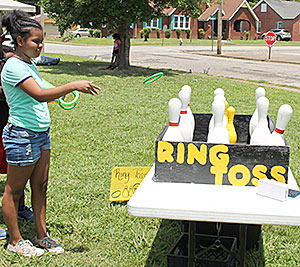 RING TOSS – Taylor Wynn spins a ring toward the bowling pins hoping to land one for a ringer. The ring toss was a popular game during the pre-4th of July picnic last Wednesday.