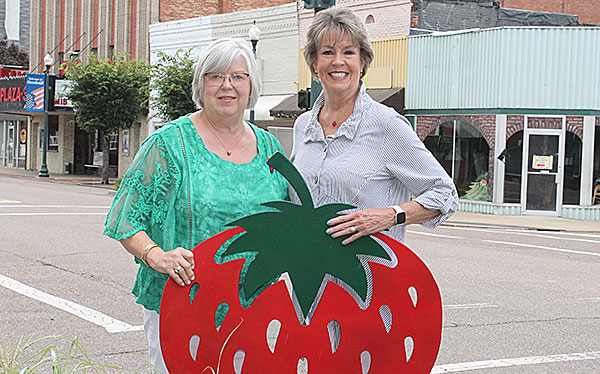 NEW GENERAL CHAIRMAN – Strawberry Festival President Betty Langley (right) selected Sherry Jo Smith as her general chairman for the 83rd West Tennessee Strawberry Festival next year. Smith has been involved with the festival for years serving on the Horse Show Committee and Golf Tournament Committee in the late 70s and early 80s. Most recently, she has co-chaired the Little Miss Territorial, Junior Miss Territorial and Miss Teen Territorial revues.

For most people in Humboldt and the surrounding area, the West Tennessee Strawberry Festival is one week out of the year. But for those involved with the festival, it can be 52 weeks a year.

That is the reason President Betty Langley has named Sherry Jo Smith as her general chairman. The general chairman position is very important, learning the ropes of overseeing Humboldt’s biggest event. It prepares them for the following year as festival president.

Langley and Smith have a long history of festival memories. Langley’s son, Blake Allen, and Smith’s daughter, Terri Crider, were Strawberry Festival Jr. Host and Jr. Hostess in 1990. Blake and Terri were in the same class in school, so naturally both parents got to know each other through the various school events, and festival events as well.

“I was shocked and honored, and nervous a little bit,” Smith recalled after Langley asked her to be general chairman. “It’s a big responsibility—a two-year commitment.”

Before accepting the role, Smith talked it over with her husband, Kenny, and daughter Terri, who was also a festival general chairman and president.

“Betty called and said she was coming to Trenton, and wanted to stop by the jail,” Smith said of the day Langley asked her to be general chairman. “During one of the revues (last festival), Betty said after this is over, I need to talk to you about some things. I thought she wanted to talk about the beauty revues.”

Instead, Langley was looking for her general chairman and asked Smith.

“I said, ‘why me?’ and she explained,” Smith recalled. “I told Terri I had a visitor. She asked who it was; I said Betty Langley and she asked me to be general chairman. Terri said, ‘Mother, that’s so good. I’m so excited for you. You have to do it.’ But I still wasn’t sure.”

Smith also talked with her bosses, Sheriff Paul Thomas and Chief Deputy Danny Lewis, before accepting the position. Smith is the chief jail administrator at the Gibson County Correctional Complex. Committing to being general chairman and then president the following year will take a lot of time, often times during the work week as well.

Smith said Thomas and Lewis were very supportive and thought she would do a great job.

Smith first got her start with the Strawberry Festival in 1979 when Marene Ross asked her to assist with the Horse Show. Smith worked on the Horse Show Committee and the Golf Tournament Committee for several years.

“We all work together and help each other out,” Smith said of the various revue committees. “Between our three pageants, there are 100 girls (competing).”

Smith truly loves the Strawberry Festival and its deep history. She attends many events each year and is always ready to volunteer when needed. This is one of the main reasons Langley selected her as general chairman.

“What are her qualities?” Langley said of her selection. “She’s a hard worker. She has a volunteer spirit. She’s stepped up and works with the festival. You have to work together and get along. I had no idea how deep and wide this (Strawberry Festival) is. Sherry Jo is the right person.”

With just a few days under their belts as a team, both ladies are hitting the ground running. One important project they’ve begun is creating a Past Presidents Advisory Board. Langley said there are so many great people who served as presidents. This advisory board is a way to keep the traditions, and pull from a wealth of knowledge and wisdom to keep moving the festival forward.

“There will be five past presidents on the board, coming from different decades,” Langley noted.

Langley said they want that diversity of presidents spanning many years.

Langley offered Smith some advice—get a notebook and take notes. Write the names of the people involved since Smith will have to select her general chairman next year, along with an honoree and festival dedication.

“One year’s done and I’m already thinking about next year,” Langley told Smith of how time flies by.
With the new team in place, planning for next year’s 83rd annual West Tennessee Strawberry Festival has already begun.

The Langley/Smith duo have a hefty chore ahead of them, but with Langley’s experience from this year’s festival, and Smith who can get advice from her past president daughter, Terri, the West Tennessee Strawberry Festival is in good hands.