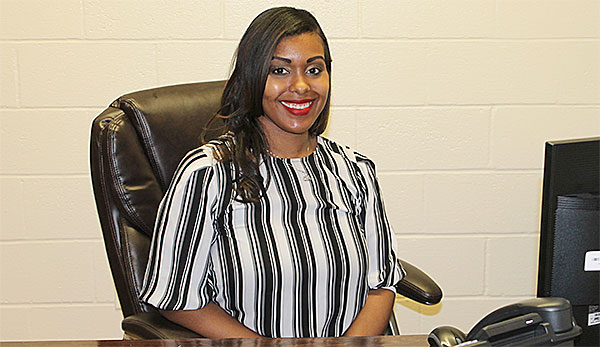 PRINCIPAL PURNELL – Tiffany Purnell is the new principal at Stigall Primary School. Purnell came to Humboldt City Schools in 2013 as a teacher at East Elementary School. She has also served as acting consulting teacher and acting principal.

With the new school year just weeks away, one of Humboldt’s three schools will have a new principal. When Stigall Primary School students come back to school on August 1, Tiffany Purnell will be their new principal.

Purnell is no stranger to Humboldt City Schools. She has worked here going on seven years.

“I am pleased to announce Mrs. Tiffany Purnell as the new Stigall Primary School principal,” Director of Schools Dr. Versie Hamlett said. “Mrs. Purnell’s commitment to student success, understanding of how to support teachers and their work, and willingness to build on traditions of success is evident.”

Purnell came to Humboldt City School in 2013 as a second grade teacher. During her time at Humboldt, she has also taught third grade, was an acting consulting teacher and acting principal.

“I truly love all students,” Purnell said. “I want to serve as a role model to all students.”

Purnell knows being in an administrative position will be much different from being in the classroom. Before, she worked daily with 20 or so students in her room. Now, she will oversee 300 students at Stigall.

“I will miss the hands-on contact with teaching kids—I love being a teacher,” Purnell noted. “I’m so excited and ready for any challenge that comes up.”

Prior to naming Purnell as principal, Dr. Hamlett did her homework as well. She surveyed the staff to get their input on who the next principal should be. Dr. Hamlett said the staff overwhelmingly mentioned Purnell by name.

Having the support of the staff at Stigall is imperative for Purnell. Purnell wants to build a cohesive bond with them.

“I am so excited to work with the dedicated teachers and staff at Stigall,” Purnell added. “My mission is to form meaningful relationships with students, parents and the community, while helping to make sure that our students receive the highest education. Our students are truly our future and I will strive to create a school culture that is conducive to academic excellence.”

One way Purnell plans to bond with the staff is by holding informal meetings outside the school. She will implement monthly meetings at locations throughout the city once a month. Spouses, significant others and friends will be invited. The first meeting is already planned and will be held at the Coffee Shop. Purnell says these ‘away from school’ meetings will help build morale.

There will be new programs at Stigall, as well as making some changes to existing programs to make education fun for both students and teachers. One program that has worked is Positive Behavior Intervention Support, or PBIS as known by the staff. PBIS encourages kids to do right. Kids are rewarded, which makes their peers want to do the same, Purnell explained.
Purnell plans to have monthly pep rallies. The first pep rally scheduled will have the theme “Under the Sea” that will include a bubble machine, photo booth and other activities for both students and parents.

Purnell is the founder of S.A.S.H. (Students Against Self-Hatred), a mentoring program for young girls, which she started in Humboldt four years ago.

Purnell says she has many aspirations for her educational career. Down the road, Purnell would like to become an assistant superintendent, a superintendent or a college professor. But for now, being principal of Stigall Primary School is her main focus.

“She has served our district for six years and has demonstrated a passion to serve and ambition to grow as a leader,” Dr. Hamlett said of Stigall’s new principal. “Mrs. Purnell will be an asset for Stigall students, teachers and parents.”

Stigall Primary School will host an open house on Monday, July 29, from 5 p.m. until 7 p.m. During the open house, students and parents will visit classrooms and meet the teachers.