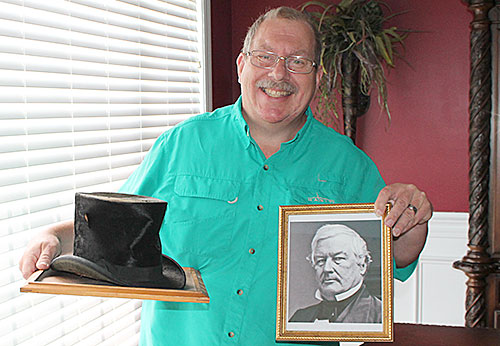 STOVEPIPE HAT – Gibson Countian Tim Besmer has collected over 10,000 Presidential artifacts over the past three-plus decades. One of his favorite pieces is this stovepipe hat worn by President Millard Fillmore during his inauguration. Besmer will have several pieces of his Presidential exhibit on display Friday, June 21 from 12:30 to 1:30 p.m. in the conference room of the Humboldt Medical Center. The display is open to the public.

When Tim Besmer was a young lad straight out of the U.S. Army, he came back to his home in Bergen County, New Jersey. One morning on his way to work, he stopped by a local deli to get a bagel and coffee to go for breakfast. That day changed his life forever.

“He said, ‘yeah, I’m who you think I am’, so I took a double take,” Besmer recalled. “It was (former President) Richard Nixon.”

Besmer reached for a napkin from the counter and asked for Nixon’s autograph. The President obliged and signed the napkin on Besmer’s back.

Besmer got his bagel and coffee, turned around and kindly thanked the President for the autograph and was heading out the door to go to work. That’s when Nixon stopped him.

Nixon invited Besmer to come to his house for coffee. But Besmer kindly declined since he had to go to work. Nixon told him he would call his boss. As Nixon is talking with Besmer’s boss, he finds a pay phone and calls his parents to let them know what was happening.

Besmer goes with the President to his house where they talked for a couple of hours. Besmer said the former President wanted his take on the world, the state of the country and other current events, especially of President Ronald Reagan, who had just been shot during an attempted assassination. Nixon wanted a young adult’s opinion.

As a token of appreciation, Nixon gave Besmer a small nametag the President received while at the Elmendorf air Force Base in Alaska. Nixon was vice president at the time under President Ike Eisenhower.

That little nametag was the first of many Presidential artifacts Besmer has collected over the past three-plus decades. Now he has over 10,000 pieces in his collection. Besmer has artifacts from every United States President except President Barack Obama.

Besmer will have a portion of his Presidential exhibit on display at the Humboldt Medical Center conference room on Friday, June 21. It is open to the public from 12:30 to 1:30 p.m.

Besmer and Nixon kept in touch. Nixon introduced him to Gerald Ford in the 1980s while President Ford was in New York City, just across the Hudson River from Bergen County, New Jersey. Besmer said he and President Ford became good friends.

He later met Vice President Dan Quayle, who served under President George H.W. Bush. Besmer said he and Quayle became good friends. It was during that time when Besmer was invited by President Bush to the White House for a moon light tour. Besmer, his wife and two other couples toured the rose garden, the Oval Office and the White House in 2004. 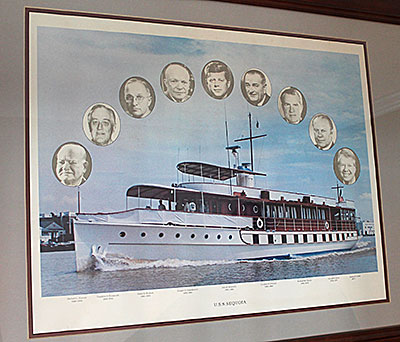 USS SEQUOIA – This is a portrait of the Presidential yacht, the U.S.S. Sequoia, that was used by nine Presidents from Herbert Hoover to Jimmy Carter. President Carter sold the yacht and later, Besmer became part owner. He later purchased most of the artifacts at an auction. Besmer said the famed vessel is rotting away at a shipyard in Norfolk, Va. as it is tied up in lawsuits between the two current owners.

Besmer said he met many people through President Ford, but one person in particular landed him many of the historic relics Besmer now owns. Ford introduced Besmer to Cy Laughter. Laughter was also a collector and was friends with many of the Presidents.

Laughter asked President Ford to put his collection in the Presidential Library, but Ford said there was no room. Ford suggested Laughter contact Besmer. Laughter gifted his collection to Besmer.

Through these connections, Besmer was able to meet President Jimmy Carter and later, President George W. Bush. Over the years, he has had correspondence with them. Besmer has tried to meet or correspond with President Barack Obama but has not had any luck getting replies. He did meet Donald Trump on multiple occasions prior to his Presidency. 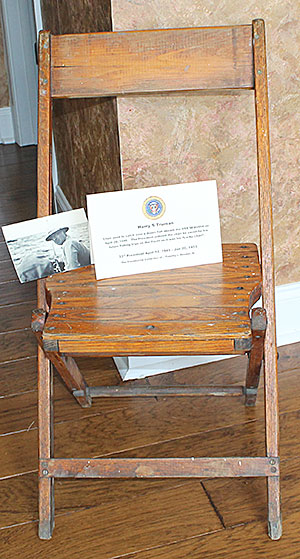 LUCKY FISHING CHAIR – This wooden chair was once aboard the U.S.S. Sequoia, the official Presidential yacht. President Harry S. Truman used the chair while fishing, calling it his lucky fishing chair. Now Tim Besmer has the chair as part of his collection of Presidential artifacts.

When President Carter sold the Sequoia, Besmer purchased almost all of the Presidential artifacts onboard the ship. One of his prize artifacts is the wooden chair President Truman used while fishing on the yacht. Truman called it his lucky fishing chair.

Unfortunately, the Sequoia is wasting away in a shipyard in Norfolk, Va. Besmer said the two current owners have filed lawsuits against each other that have not been ruled upon. In the meantime, the famed vessel is deteriorating.

Besmer has written several legislators and President Trump in an attempt to have Congress appropriate funds to put this piece of history in a museum, most specifically the U.S. Naval Museum in Washington D.C.

The Sequoia holds a special place in Besmer’s heart. One of the most historical voyages of the yacht was President Kennedy’s trip up the Potomac River to Mount Vernon, the home of President George Washington.

While Besmer was part owner of the Sequoia, President Ford asked Besmer to take his wife, Betty Ford, their children and grandchildren on the exact same private cruise President Kennedy and his family had done years ago. Besmer said Ford knew his health was failing and his days were numbered. This was a special cruise for President Ford before he died. It was held, per his wishes after he died in June 2007.

While owning the Sequoia, Besmer hosted Vice President Dick Cheney, who used the yacht to hold two cabinet meetings. Besmer also hosted Soviet leader Mikhail Gorbachev onboard the Sequoia. Gorbachev was hosting a fundraiser aboard the famed vessel. President Clinton was hosted when he returned from a state visit to Egypt.

Another prize artifact in Besmer’s collection is the stovepipe hat worn by President Millard Fillmore during his inauguration.

Almost everyone 25 years or older knows the history of the “hanging chad” during the Presidential Election in 2000. Florida’s ballots were defective since some of the tiny punch-holes on ballots were not completely punched, leaving the hanging chad. Florida officials did a recount and pronounce George W. Bush had defeated Al Gore by 537 votes, giving Bush the needed Electoral College votes need. Besmer has one of the voting booths known for hanging chads in his collection, along with a baggie of the chads. 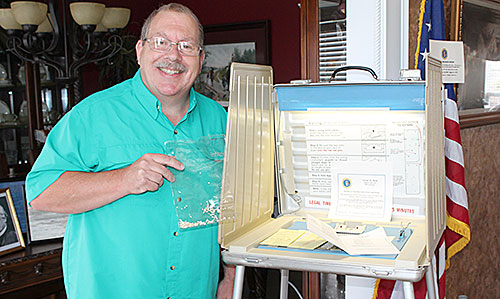 HANGING CHADS – Tim Besmer stands beside one of the actual voting machines from the Florida 2000 Presidential Election, made famous for the hanging chads. Florida officials eventually announced George W. Bush had defeated Al Gore by 357 voted, giving Bush the number of Electoral College votes to win the Presidency. Besmer holds a plastic bag with actual chads from that election.

Over the years, Besmer has displayed his Presidential exhibit for schools and other organizations. When kids actually see the artifacts, it gives them a better feel for the history of the United States, Besmer says.

This exhibit is one of the four largest in the United States.

“Who would have thought a bagel and coffee would lead to this?” Besmer said of his Presidential exhibit. “All this from a meeting in a deli with Nixon.”