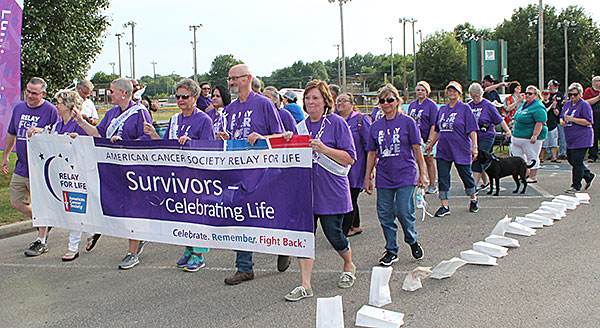 Gibson Countians came out in droves last Saturday evening for a big fight. No, this was not a boxing match. Instead, they joined forces to fight cancer.

This year’s Gibson County Relay for Life was hosted by Trenton at Shady Acers Park. People from all across the county made the short trip to Trenton to show their support.

Relay for Life is a way to raise funds to fight cancer through the American Cancer Society. Cancer survivors are honored, caregivers are recognized and those who lost the fight against cancer are remembered. 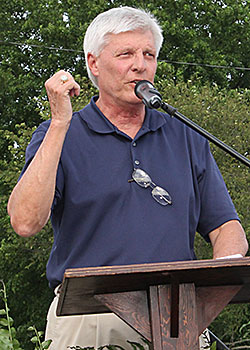 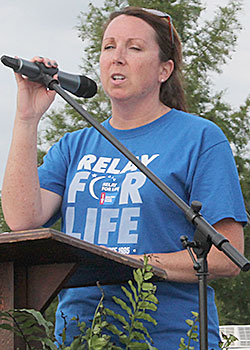 EVENT CHAIR – Relay for Life Event Chairperson Libby Wickersham thanks everyone for attending and supporting Relay.

Greater Gibson County Chamber of Commerce Executive Director Libby Wickersham was the event chairperson for this year’s Relay for Life and did an excellent job. She and the committee members put together an evening full of fun and games, live music and of course time to honor those affected by cancer.

Bradley Owens, a cancer survivor himself, was emcee for the night. He introduced Trenton Mayor Ricky Jackson, who welcomed everyone to Relay for Life. Bro. James Rogers led the invocation, followed by Rachel Johnson singing the National Anthem.

Next, Owens announced all the honorary chairs from each segment of the county. From Humboldt were Barry DeLoach and Theresa Kennedy, from Milan were Nancy Bradford and Denise Clemmer, from Trenton were Mark Gibson and Glenda Martin, from Medina was Celisa Williford, and from northern Gibson County were Scarlett Spencer and Jimmy Zarecor. 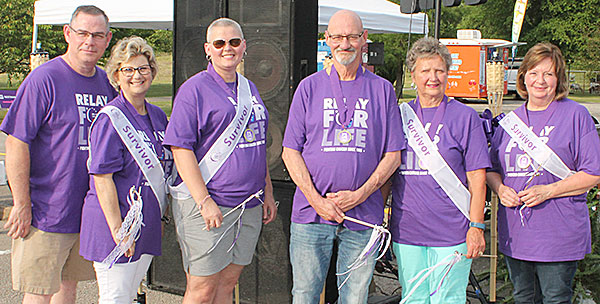 After all the recognitions and announcements, cancer survivors lined up for the Survivor Lap. Crowds of people lined the sides applauding, as dozens of survivors paraded around the trail. This group was led by the honorary chairs holding the banner.

CAREGIVERS LAP – These people were recognized for their commitment to helping loved ones battle cancer during Relay’s Caregiver Lap.

Next was the Caregivers Lap. This lap is to honor those who take care of or took care of a loved one suffering from cancer. Again, the crowd applauded as they walked the lap.

TEAM SPIRIT LAP – Relay for Life team members make the lap around the trail for the Team Spirit Lap at Saturday’s event.

The final honorary lap was to recognize the teams who came to support and raise money for Relay for Life.

The next segments of Relay included live music, the Blues Brother and more fun and games.

At 10 p.m., the setting went from upbeat and fun to quite and humbling. This was when the Luminaria ceremony was held with white paper bags lined the trail with candles lit inside each bag. Each Luminaria had the name of a person who battled cancer and won, or the name of someone who lost the fight against cancer. This part of Relay for Life is always solemn and very heart-felt. The Luminaria ceremony is what Relay for Life is all about—fighting cancer, research to find a cure and honoring those lost to cancer.

The evening wrapped up with the Fight Back Ceremony, closing out the event.

PRESENTING SPONSOR – The Ceco Door Relay for Life team proudly displays their banner as Presenting Sponsor for this year’s Gibson County Relay for Life. Shady Acres Park in Trenton was the location this year for the county-wide event. 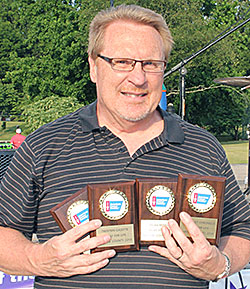 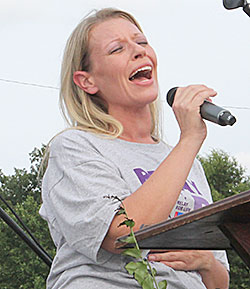