As the meeting began, Alderlady Donna Johnson asked to amend the agenda to add discussion on the city attorney and city building inspector positions. Currently both jobs are vacant after attorney Terri Crider resigned from the position and John Morrison was terminated for not being certified.

Mayor Marvin Sikes said there was nothing new on either of the jobs as far as filling the positions, but Johnson still wanted to amend the agenda so there could be discussion.

The first item of business was the first reading of Ordinance 2019-02, which amends Ordinance 2018-02 adopting the 2018-19 budget. Amending the current budget is not out of the ordinary as the conclusion of the fiscal year approaches.
The amendment was approved unanimously. The second reading of the ordinance will be held during the June 24 city board meeting.

Next on the agenda was adopting next year’s budget. Ordinance 2019-03 was presented for the first reading. The city budget includes Humboldt Utilities’ budget and Humboldt City Schools’ budget.

During discussion, Johnson made note that the city’s streets are in bad need of paving.

“We have to come up with something to fix our streets,” Johnson said. “I’ve been after this for 15 years.”

“We have to watch our budget,” Sikes replied. “I know they (streets) need work. Soon, we will see more money coming—property taxes. We live by property taxes. Paving is so expensive.”

Alderman Bob Pruett asked what the city’s current property tax rate is, to which Mayor Sikes replied, $3.04. With the recent property reassessment, the city had to lower the property tax rate to $2.7297 in order to bring in the same amount of money. If the city opted to keep the rate at $3.04, it would be considered a tax increase even though the rate would not change.
Sikes reminded the board that shortly after he took office, the state did a property reassessment. At that time, the state recommended a 12-cent increase in order to bring the same amount of money. But the board voted to keep the old tax rate, which in turn decreased the amount of money brought in less money than the previous years.

“Where’s our money that goes to the county?” Alderman Leon McNeal asked.

After discussion was over, the board approved the first reading of the budget ordinance. The second reading will be held June 24. A public hearing on the budget will be held at 5 p.m., before the board meeting.

“How much do we give the schools?—Ten million?” Graves asked.

City treasurer Kim Hadley corrected Graves, saying the city’s appropriation for the school system is $2 million. Most of the school’s money comes from state and federal funding.

•An ordinance to rezone properties located on Stallings St. from R-2 (medium density residential) to B-2 (general business) was presented. John Warmath and Elmer Williams own the properties.

No information about what the owners wanted to use the property for was presented during the board meeting. Warmath said the day after the meeting, the property would have been used for storage units and it adjoins existing commercial property.

“We ran into another one like this,” McNeal said during discussion of the ordinance to rezone. “We didn’t rezone it. We can’t do for one and not the other.”

McNeal was referring to a proposed auto detailing shop going in with residential zones all around it. The board voted that down.

“My concern is if it’s commercial, anything could go there,” Graves added.

Alderman Bob Pruett noted how the property is between two streets.

“Do we want to put commercial in the middle with residential outside?” Pruett asked.

Sikes told the board that the planning commission had approved the rezoning request and recommended the property be rezoned to B-2. Sikes also noted that the daycare property on either side of the proposed rezoned property was zoned residential but was paying commercial tax rate. He was not sure how that was arranged by previous administrations.
The board unanimously voted against rezoning the Warmath and Williams properties.

•The board accepted the resignation of city worker, James Shedd. Shedd worked as a mechanic for the Public Works department. 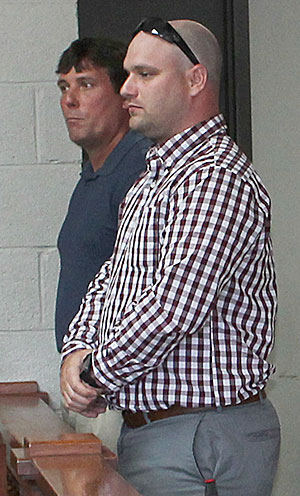 NEW FIREMEN – Upon the recommendation of Humboldt Fire Chief Chester Owens, the city board approved hiring Jonathan Stow (right) and John Belanger (left) as new fire fighters for the Humboldt Fire Department. Both men must attend the academy before being certified.

Chief Owens told the board that both had passed the agility test. He said the men did not pass it the first go around but kept going until they were able to pass the test. Owens praised their commitment to doing whatever it took to pass the test and become fire fighters.

Owens said Belanger and Stow still have to go through the academy before being certified. He also noted that two current fire fighters had just passed the academy.

Pruett asked Chief Owens if three more fire fighters would get the department where it needs to be. Owens said that was correct.

Owens told the board that more candidates were to have agility test last week.

•The final agenda item, which was added earlier in the meeting, was an update and discussion on filling the city attorney and building inspector positions. Mayor Sikes said he did not have anything new as far as hiring an attorney. He said he has talked to some attorneys about the job.

“I want to make sure we get the right person,” Sikes told the board. “I have asked an attorney but he hasn’t made a decision. If he does (accept the job) I will introduce him before the June 24 meeting.”

Next, hiring a building inspector was up for discussion.

“You see him—it’s me,” Sikes replied. “I have to take care of everything. I see who needs a permit or inspection.”
Sikes said city engineer Terry Drumwright knows someone who is retired that might be interested in the building inspector’s job. The mayor said he would consider hiring this person if he wants the job.

Sikes told the board that there are four certification tests and that the inspector does not have to take all four at once.
Pruett asked if this person is certified, to which Sikes replied, “No, but he has all the books.”

“We don’t want to get back into this mess,” McNeal said of having a non-certified inspector.
Sikes agreed with McNeal, but he also wants to fill the position with someone who can do the job.

“Myself and my staff have been through hell,” Sikes said of the workload of permits and inspections coming through city hall. “We have taken the blunt of this—all the permits.”

Mayor Sikes told the board he plans to meet with the man soon.