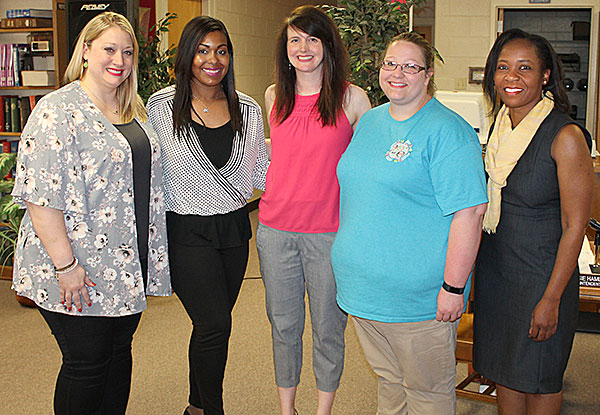 Humboldt educators will see a little extra on their paychecks come July. The Humboldt School board approved their 2019-20 school budget.

Not only will the staff receive a raise, there is also a $150 Christmas bonus included in the budget.

Substitute teachers will also get a small increase of $5 per day.

“We held a (budget) workshop,” board member Leon McNeal said. “We’re taking care of our substitute teachers. Everyone’s getting a raise and a Christmas bonus.”

The budget was unanimously approved.

Now, the school budget will be included in the city’s budget, as will Humboldt Utilities’ budget. Once the Humboldt board of Aldermen passes their budget, the school and utility budgets will be approved.

School board member, Wayne McLemore said it was his honor to make the motion and approve tenure to the three ladies. Board member Valeria Wedley seconded the motion, which passed unanimously.

Dr. Versie Hamlett, director of school, asked the three teachers to come forward and be recognized.

•A report on Dr. Hamlett’s evaluation was presented. The report showed an overall score of 3.36, which was ranked as “above expectation”.

Dr. Hamlett said she would like to meet with all the board members individually to seek ways to continue to improve.

Wedley handed out several printed documents to the board and Dr. Hamlett throughout the segment. She quoted Tennessee Code Annotated laws as well as school board policies, with copies of each for the board.

For several minutes Wedley read emails that were sent to all the board members, as well as text messages, all regarding an incident that happened at a school in April. Wedley never revealed the person’s name for anonymity and referred to them as the email author.

Wedley said she was purposely vague in her discussion to protect all involved.

After a long reading of emails and texts by Wedley, board member Mark Hodge said these types of incidents are the sole reason he accepted the school board seat. He said discipline and safety must be implemented in the schools.

The board agreed to have TSBA attorney, Chuck Cagle, meet with the board to discuss some of the school board policies.

Dr. Hamlett and board chairman, Terry Johnson, will set up the meeting. McNeal suggested they meet in September during a workshop already scheduled.

Wedley said the meeting needs to be sooner. She added if they could meet tomorrow, she would do whatever it takes to meet and get this incident resolved.