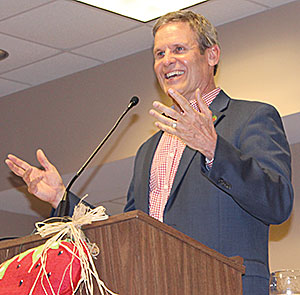 With the slip of the tongue, Strawberry Festival Governor’s Luncheon committee chairman Alex Smith gave everyone attending the luncheon a good laugh. As he was introducing Tennessee Governor Bill Lee, Smith misspoke, saying Lee was in his fifth year, instead of fifth month.

“I’ve already got him re-elected,” Smith said in jest. “In five months on the job, Governor Lee has had days he’s loved the job and days when he longs for his home and farm. To make him feel at home, the beef served today came from the governor’s farm. I hope it reminds you of home.”

“It’s great to be here with the first lady,” Governor Lee told the crowd of better than 300 strong, having his wife Marie by his side. “I go to a lot of events, but this may be the biggest assembly of politicians and leaders in the state.”

Governor Lee’s speech was short and sweet as he had another engagement on his calendar the same afternoon.
He alluded to the Strawberry Festival as hometown at its best.

“It’s a great time for us,” Lee said. “There something special about today. I’m grateful to be here.”

The governor praised those state senators and state representatives attending the Governor’s Luncheon.

“You have great representatives here who represent you well,” Governor Lee noted. “They drive to Nashville four months out of the year. Now I have the privilege to work with them.”

Last year while attending the Strawberry Festival Governor’s Luncheon, Lee, along with five other gubernatorial candidates, each got time to address the crowd. He joked at how he was last in line.

“You run around for two years saying what you want to do—education, better jobs,” Lee recalled of his campaign days. “Then you get to this spot.”

Lee says the first executive order he signed will help West Tennessee, working with prisons to lower the recidivism rate and criminal justice reform. Lee said Tennessee will lead the nation with this reform.

Governor Lee shared two moving occasions he attended within the past two days. The first was welcoming home 100 troops while standing at the bottom steps of their airplane.

“It was a privilege to do that,” the governor said. “I did this not just for me, but on behalf of Tennessee.”
The second happened earlier that morning when the governor had a sobering experience when he spoke at a fallen police officer’s memorial. He said these brave men and women serve in the line of duty, risking their lives.

“I want to thank you for having me here today,” Governor Lee said in his closing remarks. “It’s a privilege to serve you. I’m happy to be here in West Tennessee.”

After a standing ovation from the crowd, Luncheon Committee members, Greer Lashlee and Rob Graning, along with Smith and Strawberry Festival President Chelsea Caraway, presented the governor and first lady with a flat of strawberries grown right here in West Tennessee, in Gibson County. The governor joked about how he was going to eat so many berries, then looked at his wife and proposed she could make some jelly. 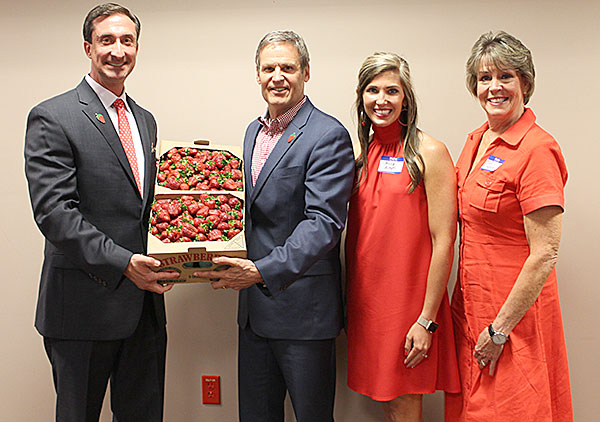