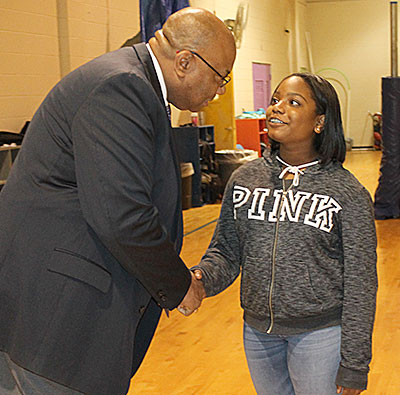 EARLY VISIT – James Ross introduces himself to Boys & Girls Club member, Christian Koonce, last Friday while making an early visit to the club. Ross, CEO and president of West Tennessee Healthcare, will be the keynote speaker at the club’s annual Bird & Burger Dinner this Saturday evening.

James Ross, president and CEO of West Tennessee Healthcare, stopped by the Boys & Girls Club of Humboldt last week to get a first-hand look at operations at the club. Ross will be the keynote speaker at the club’s Bird & Burger Dinner this Saturday evening.

While visiting with the kids last Friday, Ross interacted with several of the Humboldt youngsters. Club assistant director, Fernezia “Nezi” Linsey took Ross, along with B&G board member Tommy Goodrum, on a tour of the facility.

He visited the computer lab, the kitchen where kids made 200 dozen chocolate covered strawberries last Strawberry Festival, pre-teen and teen game rooms, the store where kids can buy snacks using B&G points they’ve earned, and of course the gymnasium where kids get their exercise.

When asked what his impression was of the Boys & Girls Club of Humboldt, Ross had one word, “Magnanimous!”

“This is what our community needs more of—our organizations and companies working together,” Ross said of the club. “Kids are our future. We need to continue to invest in these kids.”

While visiting the club, the television in the lobby played a slide show of pictures of the kids participating in various programs. He laughed at some pictures where kids had gotten muddy on one of the field trips.

“It takes me back, getting sweaty and dirty is good,” Ross chuckled. “We have our computers, our technology but there’s nothing like playing good ole games. That’s what growing up is about.”

Playing games, Ross says, is where relationships are built. Expending energy is healthy but just as important is learning to play together and earn respect for each other.

When asked what he planned for his topic during Bird & Burger, Ross said he was undecided but had narrowed it down to two themes, “Adversity leads to Accomplishments”, which is his own personal story, or “Meeting the Need and Making a Difference”, which is what he saw last Friday visiting the club. Ross said it would probably be a combination of both. 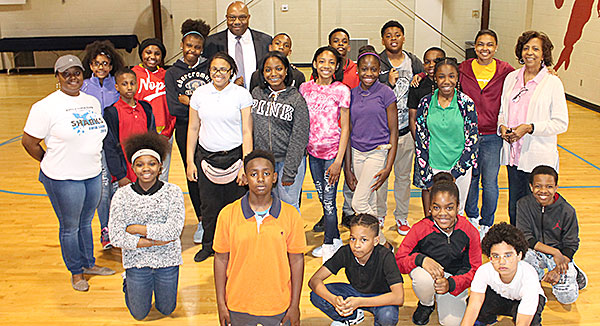 B&G VISIT – James Ross, CEO and president of West Tennessee Healthcare, stopped by the Boys & Girls Club of Humboldt last Friday to get a first-hand look at the club. Ross will be the featured speaker at the club’s Bird & Burger Dinner this Saturday night.

Originally from Henderson, Tenn., Ross joined West Tennessee Healthcare in 1985 as a registered nurse in the surgical intensive care unit. Throughout his career with the health system, he has held various positions, including critical care coordinator, cardiac services manager, director of CCU, administrator of the West Tennessee Surgery Center, executive director of physician services, director of case management/social services, as well as, vice president of hospital services.

In 2009, Ross was named chief operating officer for Jackson-Madison County General Hospital.  In 2016, the board of trustees named Ross the acting CEO for West Tennessee Healthcare.

Ross holds licenses as an emergency medical tech advanced, registered nurse and nursing home administrator.
He and his wife, Cindy, have two children, Ashley and Kelsey, and two grandchildren, Weston and Maddie Kate.