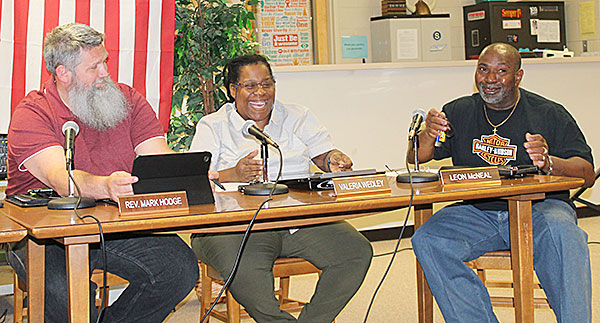 HAVING A LAUGH – After Thursday evening’s school board meeting, board members (from left) Mark Hodge, Valeria Wedley and Leon McNeal share a laugh at the board table. Earlier in the meeting, the board approved keeping Diane Hammonds as the school system’s testing coordinator.

Discussion of a key position in the school system was the hot topic when the Humboldt School Board met last Thursday evening. A board policy approved last month stated that the board would appoint the system testing coordinator position. 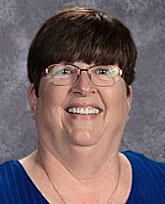 Diane Hammonds has held the position for the past five years and was the recommendation from Director of Schools Dr. Versie Hamlett to continue in the position. Hammonds trained under current school board member, Wayne McLemore, five years prior as co-testing coordinator.

Board member, Leon McNeal, requested McLemore should abstain from voting since he was the one who trained Hammonds. McLemore replied to McNeal’s request, “Duly noted.”

During discussion on appointing the test coordinator position, board member, Valeria Wedley, questioned why only one person is trained for such an important position.

“How can we not have a back up?” Wedley asked. “It’s too important.”

Dr. Hamlett said there are three building testing coordinators who work under Hammonds and have the training.

“If needed, the building coordinators would step up,” Dr. Hamlett said.

Board member, Mark Hodge, asked Dr. Hamlett if the building coordinators have the ability to do the job.

Dr. Hamlett said the coordinators are capable of performing the job. Dr. Hamlett also noted that she had held the testing coordinator position previously and would be able to guide them if needed.

McLemore told the board the testing coordinator’s position is a thankless job.

Wedley suggested putting the procedures in the policy in writing.

“It’s very important to have good test scores,” McNeal noted. “I agree with Ms. Wedley. We need a plan A and a plan B. I support Ms. Hammonds. We’re already in testing now. It’s too late.”

Hammonds was unanimously approved to continue as system testing coordinator by a vote of 4-0. Board member Terry Johnson was unable to attend the meeting.

•The board unanimously approved the 2019-2020 textbook adoption.

The request was to purchase any of the resources on the Tennessee official list of textbooks for social studies, world language and CTE marketing, business management and administration.

•During the superintendent’s report, Dr. Hamlett announced there would be a budget workshop that is open to the public on Thursday, April 25 at 9 a.m.

She also announced the CASA program will present “The Lion King” on May 2 and 3 at 6:30 p.m. in the old junior high auditorium on Ferrell St. in Humboldt. Everyone is invited, Dr. Hamlett noted.

Dr. Hamlett asked McNeal to talk about the upcoming job fair. McNeal said there was a good turnout last year and expects another one this year. The job fair will be May 3 at Lane Chapel beginning at 9 a.m. McNeal said there will be representatives from local businesses and industries, technology centers, military and other professionals to discuss careers.

“Some kids are not college material,” McNeal said. “With vocational training, some can make $16, $17 an hour. That’s good money.”

McNeal thanked the school system, school board, parents and the community for coming together to hold the job fair. He also noted the Stigall Museum board would provide food and everything is free.