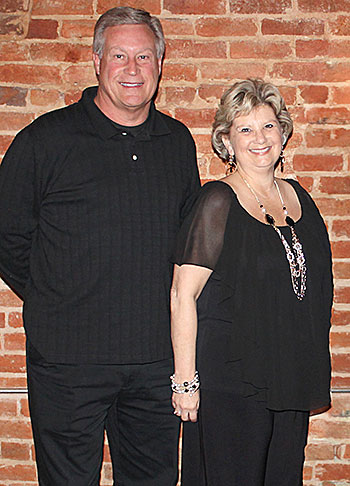 RELAY HONOREE – Relay for Life co-honoree for Humboldt this year is Theresa Kennedy. She is joined by her husband, Mike. Kennedy will share the honoree spotlight this year with Barry DeLoach as co-honoree.

With the Gibson County community Relay for Life event right around the corner, Humboldt’s Relay committee is proud to announce Theresa Kennedy is co-honoree for Humboldt. Barry DeLoach (article in next week’s Chronicle) is also co-honoree.

“Mitzie (Privitt) called and asked if I would accept the roll of (Relay for Life) honoree,” Kennedy recalled. “She kept talking and by the time the conversation was over, I said, ‘sure’.”

One of the reasons Kennedy said she accepted is due to being co-honoree with DeLoach. They have family ties. Mike and Theresa’s daughter, Ashlee DeLoach, is married to Barry’s nephew, Rob. Rob’s mother, Jenny DeLoach, is also a cancer survivor and was Relay honoree a few years ago.

“Serving with Barry, I wanted to be honoree with him,” Kennedy added. “We are family.”

The year Jenny was honoree, Kennedy had just been diagnosed herself. They rode in the Strawberry Festival parades on the Relay for Life float. Kennedy also walked with Jenny during the Survivor’s Walk at the Humboldt Relay for Life event.

Kennedy was diagnosed with CML (chronic myeloid leukemia) in April 2013. Before she was diagnosed, Kennedy noticed she was losing weight and could not eat. She was having abdominal pain that would move around.

She went to see her primary physician, Dr. Keith Kirby. When her lab work came back, Dr. Kirby called her up and said he was concerned. Kennedy told him she had to work. Kirby asked if she could take off work and come into the office.

Kennedy and daughter Ashlee went to see Dr. Kirby since their husbands, Mike and Rob, were gone to a NASCAR race. He said the labs showed her white blood count was elevated. Dr. Kirby said he was pretty sure Kennedy had leukemia and referred her to Dr. Dwight Kaufman.

Dr. Kaufman suspected Kennedy had CML and a bone marrow biopsy confirmed the doctor’s suspicion. He started her on chemo meds that day for six months. During her checkup, Kennedy’s liver enzymes were elevated. They halted the chemo meds and retested. It was determined the meds were causing the enzymes elevation.

When Kennedy’s medication was changed, the new chemo drugs caused fluid around her lungs.
Kennedy then went to see Dr. Brian Engelhardt at Vanderbilt for a bone marrow transplant. Kennedy’s family was tested but none were a match.

Dr. Engelhardt said he wanted to try one more medication. This new medication also caused issues, so the doctor lowered the dosage. Kennedy’s labs began getting better and better.

In July 2014, Kennedy went into remission and has since been on the same chemo meds. In November 2017, she was in complete remission.

“Because I was not as sick or had to fight rougher treatments, I feel like there are other more deserving,” Kennedy said of being an honoree. “There are others who went through a lot more than me.”

“What I’m looking forward to the most is the Survivor Walk,” Kennedy said of the upcoming Relay event. “The community comes together for it.”

Last year was the first combined county-wide Relay event and was held in Milan. This year’s Relay for Life event will be held at Shady Acres Park in Trenton, Tenn. on Saturday, June 15.