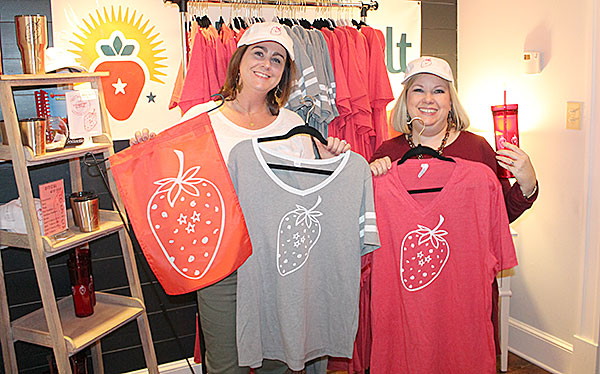 WTSF NEW BRANDING – After spending months on designs, the Humboldt Chamber of Commerce is rolling out the official Strawberry Festival branding made up of specific colors, fonts, icons and other parts. This is the first time the festival has a designated brand. Humboldt Chamber’s Beth Culpepper (left) and Amanda Love show off some of the promotional items with the new brand.

In today’s world, almost everything has its own brand. Food is branded, clothes have brands, businesses and companies have their own brand. This is why Strawberry Festival officials, through the Humboldt Chamber of Commerce, decided it was time Humboldt’s claim to fame had it own branding.

“This is the first time the Strawberry Festival has an official brand,” chamber events coordinator, Beth Culpepper said. “Festival presidents have had their own artwork or design but never a brand. We felt like the festival needed a true identity—something that represents the festival as a whole, not just pageants and parades, but the entire festival.”

Chamber executive director, Amanda Love, said from a design standpoint, having its own brand takes all the guess-work out. The brand has specific colors, fonts and icons.

Last summer, Culpepper and previous chamber events coordinator, Anna Surratt, toyed with the idea of branding the festival. They were looking for something to take it to the next level. That got the ball rolling.

Last August, Love and Culpepper met with graphic designer Elizabeth McCravy. McCravy has worked for some heavy-hitters like Logan’s Roadhouse while also working on other projects, some locally. She has ties to Humboldt, Love said.

“We created Pinterest boards with pictures of different festivals, colors, events, that were pleasing to the eye,” Culpepper said of how the first designs were derived. “With Pinterest boards you see what direction you are going.”

“We had no clue what we wanted, only what we liked,” Love added. “By the time we filled our questionnaires and had our Pinterest boards, she (McCravy) knew exactly what we wanted. We’re so proud of it.”

By September and early October, the first designs were coming in and being approved. As with any brand, there are various pieces involved. There were logos, a timeline, slogan, and the pitch, what they want people to know most about the Strawberry Festival.

“It lets you know what type of event this is,” Love explained. “The words ‘tradition’ and ‘family’ kept coming up.”

“The strawberry was first and foremost,” Culpepper noted. “We used the tri-star for what it stands for.”

Gibson County is designated by the state as a Three-Star Community. The tri-star ties in with that, Love said.

By November, the final branding package was complete. But with the calendar being in the heart of the holiday season, they decided to wait until closer to spring to roll out the new designs.

Now, people in Humboldt are starting to get a good look at the new Strawberry Festival brand. New sponsorship flags with the new brand replaced the old flags on utility poles before the festival.

There is even inflatable furniture with branding that will be used for VIP guests at three festival events, Opening Celebration on the 50 yard line at Barker Memorial Stadium, Thursday night front row seats at the downtown concert and at the top of the steps of the Humboldt Higher Education Center on Main St. during the Grand Floats Parade on Friday. Three lucky winners through Facebook and other chamber contests will get the VIP treatment for themselves and three of their guests. Keep in touch with the chamber for more details.

“Having its own brand offers so many options promoting the Strawberry Festival,” Love said. “There are so many pieces to use—it will not get stale.”