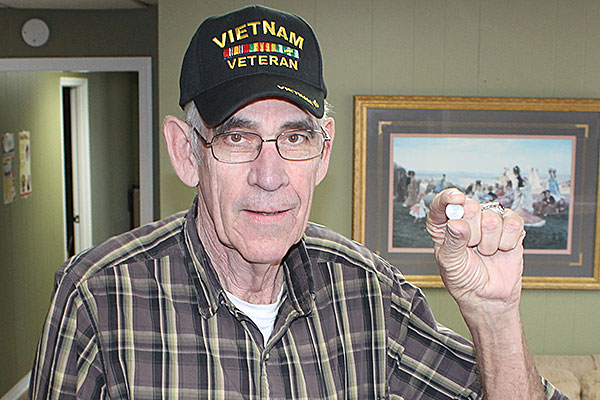 SPECIAL PENNY – Larry Sikes holds a 1990 penny that is like no other in the world. It is a special penny with a silver tails side for Sgt. Clifford Wilford, a WWII veteran who fought in Germany. The pennies were only made for the 10th Infantry, one for each man. Sikes is trying to find Wilford’s family so he can return it to them.

There are numerous clichés or sayings about pennies—Uncle Sam’s one-cent piece. Some might be “a penny for your thoughts”, “don’t have a penny to my name” and “a bad penny always turns up”, just to name a few.

But for Larry Sikes, “a penny saved is a penny earned” has a new meaning. Sikes is in possession of a special penny with a different tails side. Old Abe is on the heads but the back has a silver insert with a WWII veterans’ military information.

“It’s a 1990 penny for Sgt. Clifford Wilford,” Sikes explained. “The back has his name and rank, and his regiment, the 10th Infantry.”

The front of the penny looks like every other 1990 penny. But the tails side has Sgt. Wilford’s name, along with his infantry in which he served.

Sikes, who is a Vietnam veteran, researched the penny and Sgt. Wilford. He discovered Wilford fought if Germany on the same battle field as Sikes’ father, Herd David Sikes. This made the penny even more special for Sikes.

“They were holding the Germans back for the Navy to come in,” Sikes said of the battle. “Sgt. Wilford fought four times and enlisted at 16 (years old). They were trapped in Bastogne for 72 days. They fought back to the Rhine River.”

Wilford served in the 3rd Battalion, 10th Infantry Regiment, 5th Infantry Division, commanded by Gen. George Patton. Sikes’ father was in the 101st Infantry, attached to the 50th Infantry, according to Sikes.

So how exactly did Sikes end up with Wilford’s penny? First of all, Sikes said the pennies were only made for the 10th Infantry, one for each man. So there weren’t a ton of the pennies floating around. He suspects the penny was lost in 1990.

Wilford was born in Kentucky. After the victory in Europe, he returned to Kentucky where he met his wife, Jewell Studdard.

They moved to Michigan in the 1950s. After Jewell passed, Wilford married Cathy Black. Sgt. Wilford died July 6, 2017.
The penny turned up in Athens, Ala. when Sikes’ brother, Rusty, found it in some change. Rusty is also a veteran.

“It’s an honor to hold this penny in my hand, knowing Sgt. Wilford served in the same war as my dad.” Sikes noted.
Sikes is hoping his ownership of the penny is temporary. He is trying to find Wilford’s relatives and return it to the rightful owners.

According to Wilford’s obituary from 2017, his wife (Cathy Black Wilford) was listed as a survivor. Wilford has two sons, Gary Lynn Wilford of Georgetown, Ill. and Howard Eugene Wilford of Fort Mill, S.C. He has a daughter, Carolyn Sue Hall of Hilton Head, S.C. There are also 10 grandchildren and 21 great-grandchildren.

With so many descendants, Sikes will hopefully find and contact them.

Sikes has enlisted help from the Library of Congress and the Department of Veterans Affairs. He received a letter from Veterans History Project, searching Wilford’s family records.

“This penny has traveled all that far, from Kentucky to Alabama, to wind up in little ole Humboldt, Tennessee,” Sikes said of the penny’s journey. “It will be an honor to give it back to them. He’s passed on. It’s an honor to have a piece of his legacy and a bigger honor to return that legacy back to his family.”