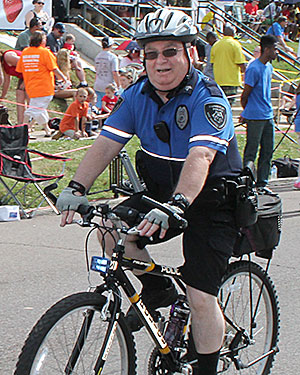 Jimmy Arnold on Bike Patrol during a recent Strawberry Festival

One of Humboldt’s finest was laid to rest last Friday. Lt. Jimmy Arnold, with the Humboldt Police Department, passed away Monday, March 25 at his home.

Lt. Arnold was known by many Humboldt citizens as a friendly, caring person. He was mild mannered, not a quality some police officers have. But Arnold’s personality was what made him special.

Arnold served 27 years in law enforcement, five years as a reserve officer with the Humboldt Police Department and 22 years as a full-time officer with HPD. He served as a critical incident debriefing member, part of the gang investigation unit and the bike patrol.

“My best memory with Humboldt Police Department involved responding to a house fire on N. 19th when myself and another officer were able to get the residents, along with their pets, out of the residence to safety,” Lt. Arnold said in early 2018 in the Humboldt Chronicle’s Honor the Blue special section. 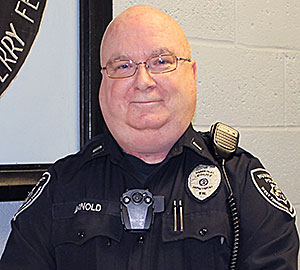 Lt. Arnold graduated from Tennessee Law Enforcement Training Academy in 1998. He was a member of the Fraternal Order of Police and taught DARE at Humboldt High School for several years.

Lt. Arnold may have been small in stature but he had a big personality. People would see him laughing and having a good time, all the while being professional in his law enforcement position.

Friday at noon, a steady stream of friends and acquaintances paid their final respects to Lt. Arnold. He was laid to rest in Rose Hill Cemetery with full police honors. Many law enforcement officers from Humboldt, Gibson County and other area agencies attended Arnold’s funeral.