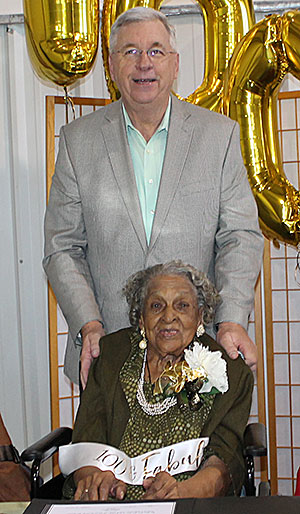 It was a cold winter’s day back in 1919 when a little girl was born in Arkansas. Last week that little girl turned 100 years old.

Lavorn Jones celebrated her 100th birthday on Wednesday, February 6, 2019. A bouquet of red roses was sitting on the coffee table in her living room. She had received several phone calls and was expecting more.

But the big celebration was held Saturday afternoon at Lane Chapel Church with hundreds and hundreds of family members, friends, guests, past co-workers and employers, and many well-wishers.

Birthday cake, refreshments and lots and lots of hugs made Ms. Lavorn’s day even more special. Her two sons, Carly “Sonny” Jones and Armour Jones were there by her side.

Jones was born on a farm in Searcy, Ark. to the late Ed and Nettie Jones. She had three sisters and four brothers, all of whom are now deceased. At the age of six, the family moved to Baldwin, Miss. They worked for Dr. Monroe Shelly.

At age 16, the family moved to Tennessee, right outside Humboldt. They worked for the Estes family near the Hamilton farm on Hwy. 152. Over the years, the family would move to other locations around Humboldt and work on farms. Jones would help with the kids. She has helped raise many kids over the years, and they treat her like family. They worked on the Sanders farm on the Medina Hwy. and the Warmath farm in the Three Way community.

The family joined Lane Chapel when the church was located on Mitchell St. Jones was baptized there. Over the years, Jones prepared meals for the church and was known for her cornbread dressing.

Working on the farms, Jones and her sister once planted a 2-acre plot of sweet potatoes. They had one mule and one plow, but got the job done.

She learned at an early age the pride in being a hard worker. She worked at many businesses in Humboldt and for several families as a custodian and helped with the children. She worked for Dr. Davis, J. Frank Warmath and Jesse Hill Ford over the years. Many of those children, who are now adults, still keep in touch. Sarah Beth Langley, granddaughter of Ford, regularly brings Jones lunch on Fridays and spends quality time with her.

Of all the jobs she’s had over the years, Jones is best known for barbecue, mainly her homemade sauce. It’s world famous. She perfected her sauce while cooking at Pulliam’s Bar-be-cue Pit on West Main St. Jones cooked barbecue at Pulliam’s from 1963 until 1980.

Her son, Armour, said she tweaked it several times before she got it just right. While at Pulliam’s, she would ship barbecue to customers in Texas and Las Vegas.

People would bring all types of varmints for her to cook—goat, rabbit, squirrel, possum, beaver and even snake. Jones said she didn’t want any part of that snake.

Beaver was by far the worst meat she cooked. Jones said it was awful. The meat is tough, so she had to boil it in salt water with vinegar to make it tender before it could go on the pit.

Her favorites are chicken and pork. She’s not very fond of turkey but has eaten it on occasion. Now Jones says she can’t eat ribs because her blood pressure would “shoot through the roof”.

Jones recalled getting her first car, an early 1960s Oldsmobile. She was so proud. Her last car, Jones had to give it back. She said at 91, she was too old to drive anymore. 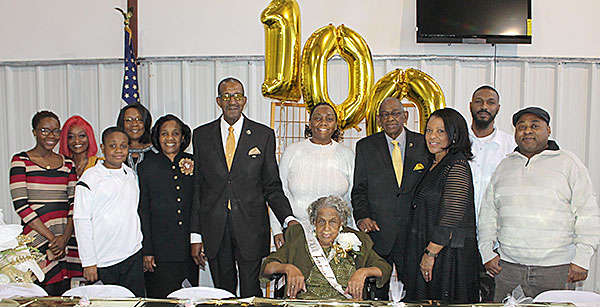 JONES CELEBRATES 100 YEARS – A celebration was held at Lane Chapel last Saturday for Lavorn Jones (seated) who just turned 100 years old. Hundreds of family and guests attended to celebrate her milestone. Joining her are some of her family members, including her two sons, Carly Jones (on her left) and Armour Jones (on her right).

Ms. Lavorn is very proud of her two sons. Jones said she never had any trouble out of them. Both finished high school, served in the military and got a college education. Jones did recall once when Armour told his mother he was quitting school. She sternly told him, no.
Jones says she can get along with anybody—black, white, it does not matter. She’s received help from her friends too.

When her father died, he owed money on the farm. Jones recalled taking all the paperwork to the bank and was told she was losing the farm. When she left, Jones was so mad. That’s when she turned to Clarence Turner. The two of them went back to the bank with the papers. It turned out, her late father only owed $80 on the property.

From there, Jones and Turner went to Trenton and got all the paperwork in order. Jones paid off the $80 and kept it up ever since.

Now her sons make sure she keeps up with her taxes and they even go to Trenton to pay them.

Jones said she worked at practically every business in Humboldt or fed them barbecue.

“That barbecue helped me,” Jones said of the many facets of her life. “I have worked my behind off in Humboldt. I haven’t had any trouble out of nobody. I’m a good, single woman. I guess that’s why I’ve lived so long.”