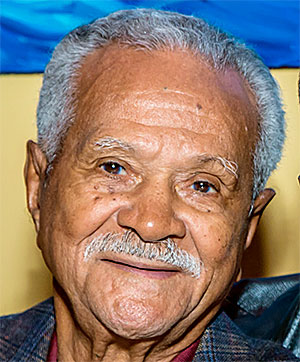 Editor’s note: Calvin Farmer passed away last week at the age of 93. His obituary is on page 5. He was truly a pioneer for Humboldt and Gibson County. Below is an article from February of 2011 I had the honor of writing about a wonderful man who did so much good in his life.

Calvin Farmer first became involved in city government in the early 70s but admited it was something he did not want to do. At that time, city aldermen seats were elected at large but had just changed into the district or precincts as they are still today. Farmer was the first African-American elected in Humboldt to sit on the city board.

“I said no,” Farmer said last week as he recalled being urged by many in his community to run for office. “I didn’t know anything about government.”

At that point in time for the nation, racial tension and issues were prevalent. It was no different in Humboldt. But Farmer hit the ground running to represent the people in the Crossing district.

“Mayor Tom McCaslin was mayor at the time and I gave him a list of 10 to 12 changes to make the city better,” Farmer said. “I think Tom McCaslin was one of the best mayors we ever had. He worked with all people to do what was best for all. We had a good relationship.”

One of the first duties of the city board was to approve the mayor’s recommendations for fire chief, police chief and city attorney. Wallace Jones, Gus Hicks and Herbert Schilling were the other board members. Farmer said there were three candidates for fire chief, two were on the department and one was not. When it came time to vote, the result was two to two, causing the mayor to cast the deciding vote. Farmer said McCaslin was not pleased to have to break the tie but sided with Farmer’s nomination and Wayne Day was hired as fire chief.

“I told the mayor, this was the best thing that could happen for this board,” Farmer noted. “It proved that we could work together on the issues and not let personalities get in the way.”

SWORN IN – Calvin Farmer (second from left) gets sworn into office as alderman for the city of Humboldt in this photo from the early 1970s. Farmer was the first black man to hold office in Humboldt. Others pictured are (from left) Gus Hicks, Farmer, Wallace Jones, Herbert Schilling, Mayor Tom McCaslin and attorney Griffin Boyte.

While a city alderman, Farmer was appointed to several committees including liaison to the school board. At that time school board members were appointed, not elected, he recalled.

The school board was pushing to build a new high school.

The plans were submitted to the city board for final approval. Again, it was a split vote between the four aldermen and Mayor McCaslin had to break the tie. He again sided with Farmer’s thinking and the entire project was approved.

But the one thing of which Farmer is most proud was his push to get more people from his community into better jobs with the city and have representation on the utility board and school board. At that time, the only black employees of the city were labor workers, Farmer said.

In many ways, Farmer helped pave the way for the city’s future as a whole, especially in the black community. His daughter, Bernita, was one of the first black students to attend Humboldt High School in the 60s after integration. But it wasn’t until the 1970s when integration was completely enforced.

While serving during the McCaslin administration, Farmer was appointed to the planning commission, a position he held until the early 80s when Marlon Hawks was elected Mayor. When Jess Pritchard became mayor, he appointed Farmer back to the commission. This time around he served through Martha Hawks’ mayoral term and stayed on under Mayor Allen Barker.

Prior to serving Humboldt, Farmer worked in construction and soon became a cement mason. He worked for Lashlee-Rich and once worked as a foreman on a construction project building dorms at the University of Mississippi in the late 50s. 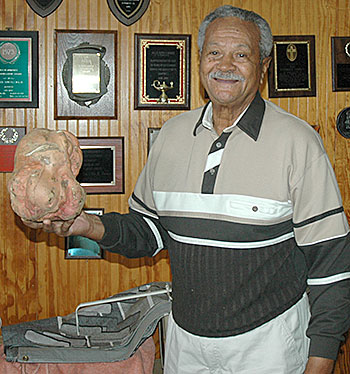 BIG TATER – After spending 20-plus years on the Humboldt Planning Commission, Calvin Farmer stepped down from the position in 2011. Farmer was Humboldt’s first black alderman, elected in the early 1970s. In retirement, he spent his days doing one of his favorite hobbies, gardening. This sweet potato he grew weighs 5 lbs.

From 1944 to 1946, Farmer said he worked for ‘Uncle Sam’. He was stationed in India during World War II as part of the 1328th Army Air Force Base Unit. His unit was a supply location that shipped bombs, ammunition and other supplies to the front lines. They were stationed below the Himalayan Mountains but yet in the jungle close to the Burma border. He said on a clear day he could see the peak of Mt. Everest.

After the military and his construction career, Farmer switched gears and began working in the insurance business. He retired from this career in the early 2000s after 30-plus years. Farmer said he started out as an agent, then became a staff manager and later was promoted to district manager.

In 2001, he began to build his current house on the Trenton Hwy. Now at age 85, he and his wife, Ollie Ruth, will celebrate their 63rd wedding anniversary this year. They have two children, Bernita Y. Miles and Calvin Tyrone “Ty” Farmer, three grandchildren and one great-grandchild. Mrs. Farmer taught school here for 37 years.

Farmer said he stays busy, even in his retirement days. He enjoys gardening and yard work, and is always helping people in the community. He played an active role in establishing the Tom & O.E. Stigall Ethnic Library and History Museum. He donated his time and effort during the planning stages and also during construction, both inside and out.

“There’s not an hour or day that goes by that I regret the experiences I’ve lived,” Farmer said. “I’ve seen many changes in my life.” 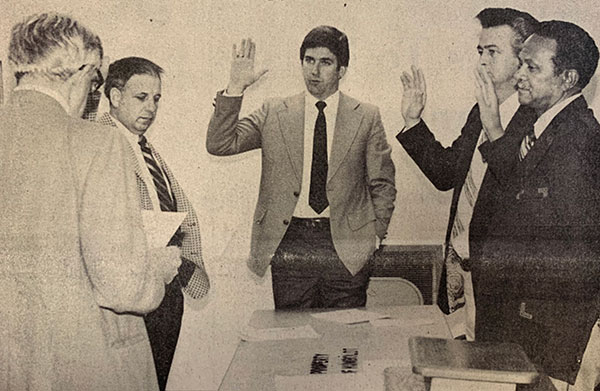 BOARD TAKES OATH – Calvin Farmer (right) along with other city aldermen, Bobby Joe Vasquez, Stan Little and Colin Barrett, are sworn into office in this Chronicle file photo from January 1982. City attorney, Griffin Boyte (left) performs the oath of office ceremony. Mayor Tom McCaslin (not pictured) was also sworn in prior to the city board meeting.