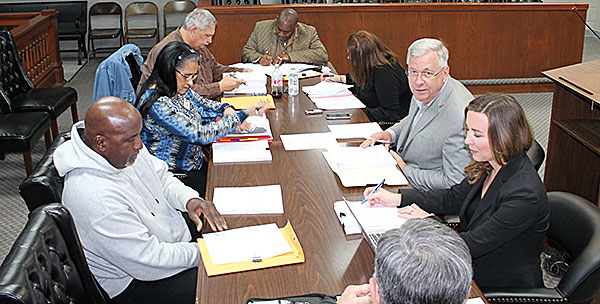 FIRST MEETING OF THE YEAR – The Humboldt City Board held their first regular meeting of the year last week. A busy agenda made for long meeting. The board was divided on a police department promotion and discussion got heated.

After not having a regular meeting since December 10 of last year, the Humboldt Board of Mayor and Alderman had a lengthy agenda to tackle.

The November accounts payable report was up for approval. As always, Alderman Bob Pruett had questions on several line items. One item, an overage in the Public Works department, Pruett questioned if it was over budget.

“We went over in the street department due to equipment breaking,” Mayor Marvin Sikes said. “It had to be repaired.”
City Treasurer Kim Hadley added there would need to be a budget amendment to cover the overage before the fiscal year ends.

“They (street department staff) need to service their equipment,” Alderman Don Graves said. “The operators ought to service it. If not, give them a shovel and a hoe.”

Mayor Sikes quickly got the board back on track with the AP report, which passed unanimously.

Another agenda item that brought some heated discussion was when the board acted on a promotion within the police department.

Chief of Police Reynard Buchanan had submitted his recommendation to promote Sgt. Kenny Rich to the rank of lieutenant. The letter noted Rich is HPD’s designated member of the West Tennessee Violent Crimes and Drug Task Force.

Along with the chief’s recommendation, a letter from Johnie Carter, deputy director with the task force, stated Special Agent Rich was promoted to assistant special agent in charge. Carter’s letter stated SA Rich excelled in his duties and showed he is more than ready to take on the increased responsibilities.

“Your hard work and dedication to not only the Task Force, but to the citizens of Humboldt and the entire 28th Judicial District over the past four and a half years, has been and continues to be exemplary and has not gone unnoticed,” Carter penned in his letter.

Chief Buchanan said Rich’s promotion within the Task Force is good and now he is in a supervisory position. Buchanan noted all the agents Rich will be supervising are lieutenants with their respective agencies. Promoting him to Lieutenant would put Rich at the same rank of his subordinates, the chief added.

Board member Leon McNeal was opposed to promoting Rich saying, “some stuff went on.”

McNeal motioned to table the promotion and James Shiver seconded the motion but it failed by a 2-3 vote.

After the vote, more discussion continued and became heated. McNeal repeated more than once of things that had gone on but never offered any details. He said he would not bring it up publicly and did not want to disgrace Humboldt.

But more discussion continued. At one point, McNeal accused the board of not caring for the kids. This hit a sore spot with other board members.

“Don’t you say I don’t care for the kids,” Alderlady Donna Johnson barked back at McNeal. “We do care about our kids.”

Mayor Sikes stepped in and got the board members calmed down.

After the smoke had settled, the board voted 3-2 to promote Rich to the rank of lieutenant with Johnson, Graves and Pruett voting for the promotion and McNeal and Shivers voting against.

•The board approved a beer permit to Loay Abdallah, who recently purchased the A&H Quick Stop (Exxon) business at the corner of Central Ave. and the Hwy. 45 Bypass. Abdallah has managed the business for several years.

•The board unanimously approved the resignation of HPD Ptl. Bailey Patterson. It was noted Patterson had accepted a position with the Medina Police Department.

•Mayor Sikes submitted his recommendation to re-appoint Shane Lynch to the Humboldt Zoning Board. The mayor said Lynch was committed and does a good job serving on the zoning board. Several board members commended Lynch for his service to Humboldt.
The board unanimously voted to approve Lynch’s re-appointment.