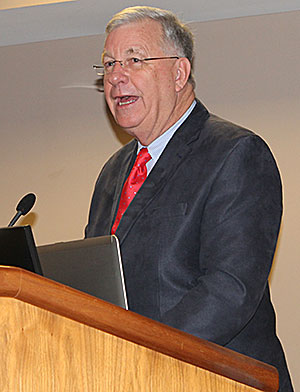 When Humboldt Mayor Marvin Sikes was preparing to address Humboldt citizens last week, he said 2018 was a very unique year for the city of Humboldt. Mayor Sikes spoke to dozens of community members Thursday morning during the annual Breakfast with the Mayor.

The breakfast, sponsored by the Humboldt Chamber of Commerce, was held in the Humboldt Medical Center’s conference room.  Guests enjoyed a buffet breakfast before Sikes took to the podium.

Humboldt Chamber Executive Director Amanda Love opened the program with a video of the mayor at his desk, talking about Humboldt in 2018. Mayor Sikes touched on many of the topics he later spoke of during his address to the crowd.

“There’s so much happening in a positive way,” Sikes said of his hometown. “When you go downtown on a Friday or Saturday night and you can’t find a parking place, that’s amazing. The people of Humboldt and our visitors are the cause. They like The Coffee Shop, the Mexican restaurant, the Italian restaurant, the movie theater. Tyson’s here, but you can’t see it yet. The people are happier. You can feel the excitement.”

Sikes spoke about the city board members and how well they work together. He noted that he does not always win with board decisions, then jokingly said he would take eight out of 10 any day. 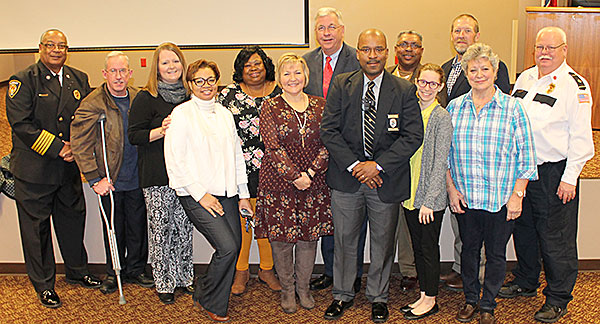 He also recognized the department heads and the office staff, which he called a family. He bragged on the good work each department does.

The mayor spoke of the good work the chamber does promoting Humboldt and how well the chamber, city and school system works together. Some cities do not have that, the mayor added.

In 2018, Humboldt was the recipient of multiple grants, many of which were for Humboldt Utilities to provide sewer and water for the Gibson County Industrial Park where Tyson’s processing plant will locate. Last week, the city board approved a $10 million loan for improvement. He said this is part of a $38 million utility project, which will mostly be funded through state and federal grants.

He also spoke about Phase 3 of the downtown enhancement grant. This will include work on S. 14th Ave. from Main St. to McKnight. New sidewalks, lighting and trees are included in this phase and will match the work already finished on Main St. and N. 14th Ave. Phase 3 was approved some time ago. Engineering, planning and many other factors play into the overall scope of the project. The mayor said work should begin in 2019.

Phase 4 of the downtown enhancement grant is already in the works. He said he did not know who titled the grant “downtown” since this project will not be downtown. Instead, this grant will provide sidewalks connecting Humboldt Jr./Sr. High School, Viking Park and Spangler Park. It will also connect the apartment complexes across from Spangler, making access to the parks and the school much easier. This phase is still in the planning and engineering stage and most likely will not begin for another year or two.

Other events and accomplishments in 2018 included Vanderbilt LifeFlight locating at the Humboldt Municipal Airport. Mayor Sikes said this is a wonderful addition to Humboldt and the surrounding areas as it provides air-ambulance service close by.

Humboldt Parks and Rec applied for and received a $1.2 million grant to improve all the city’s parks. This grant was an 80-20 match, meaning the grant funds 80-percent and the city must match the remaining 20-percent. Bailey Park, 6th Street Park and Spangler Park will get some much-needed improvements. Some of the improvements will be new playground equipment, renovating restroom facilities and other enhancements. This project is also in the planning and engineering stages.

Although there is much excitement for downtown and for the parks, Sikes believes the north part of town will soon be where the development will be in the coming years. Of course, Tyson locating on the north end of town will create a need for more businesses and services. 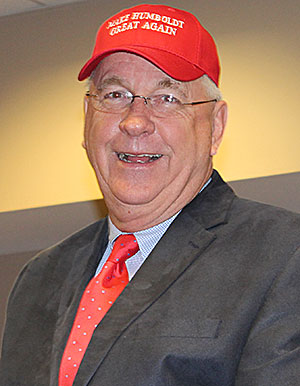 MAKE HUMBOLDT GREAT AGAIN – Mayor Marvin Sikes dons a red cap with the words, “Make Humboldt Great Again” embroidered on it during the annual Breakfast with the Mayor last Thursday. Mayor Sikes said he looked for a red and blue cap but could not find one. He said it is not political in any way but represents his love for Humboldt.

An area of around 40 acres behind Wall Street Grill is primed for new development. Construction is already underway for the Dialysis Clinic and Wendy’s on both sides of Wall Street. The city and chamber are working to get a hotel, more retail and other business at that location.
Mayor Sikes said the west side of town has had some improvements as well. The old Stigall gym on 6th St. was painted last year and renovated. He said it looks very good. The vacant lot across the street, where the old Stigall School once stood, was donated to the city and has been cleaned up. Sikes wants to create a mini park on the property that would include a monument honoring Tom Stigall.

Also on the west side, Mayor Sikes spoke about Front St., and how he no longer wants people to call it the Crossing.

“The Crossing just has a negative vibe,” the mayor said. “Front St. sounds better. Just think of all the history there. Front St. was where Humboldt started 153 years ago.”

He challenged all of the city’s department heads to each come up with a project that will enhance Front St. and make it better. Mayor Sikes included himself, noting his office will plan a project as well.

Mayor Sikes thanked everyone for their support, especially his wife, Carol, and his family.

“Your attendance here this morning is humbling to me,” Sikes said of the crowd attending the breakfast. “It’s a new day in Humboldt and Gibson County. There’s wonderful spirit going on here. I thank God for my failures and for my blessings. Failures make you stronger.”

In closing, Mayor Sikes pulled out a red cap. He said he searched for a red and blue cap but could not find one. He noted that it being red is not political. The wording on the cap, “Make Humboldt Great Again”, is what Sikes believes is in store for Humboldt. With a projected $85-$90 million in annual payroll infused into the economy once Tyson is up and running with 1,600 new jobs and new money in town, it would be hard to argue with the mayor’s assessment and optimism of things to come.

Sikes thanked the crowd and said he hopes to continue having Breakfast with the Mayor for the next seven years, hinting another run for mayor is already in the works.

BIG CROWD – With a limited number of tickets available, the conference room at Humboldt Medical Center still had a good number of people attending Breakfast with the Mayor. A buffet line was enjoyed by the dozens and dozens of attendees last Thursday.