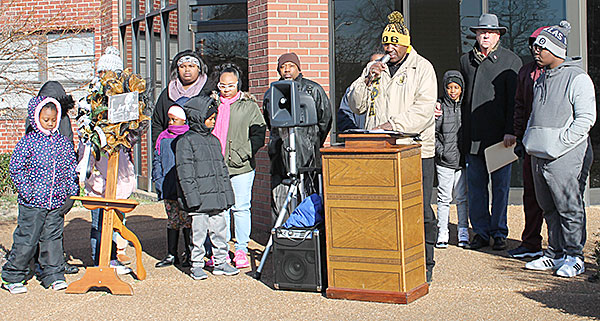 SOMBER PROGRAM – Dr. Frank Thomas (behind podium) greets the crowd of marchers during the annual Martin Luther King Jr. March on a cold Monday morning. Thomas, along with Humboldt Mayor Marvin Sikes, were the speakers at the Municipal Building, the first stop during the march. Thomas’ wife, Gwendolyn, led the group, singing songs during the program. A wreath was presented honoring the late civil rights leader.

A small crowd of Humboldtians braved the cold Monday morning to gather in celebration of Martin Luther King Day. Temperatures were below 30 degrees but that did not stop this crowd from completing its annual march from Morning Star Missionary Baptist Church to the Municipal Building, where a short wreath laying ceremony was held.

Before reaching the Municipal Building, the crowd could be seen and heard singing songs of praise as it made its way down Central Ave.

Dr. Frank Thomas led the marchers in prayer. He prayed not only for peace and equality, but also for change here in Humboldt and all over the world. After the prayer, Mayor Marvin Sikes designated Martin Luther King Day in Humboldt. He also asked the children to come stand with him as the wreath was unveiled and urged them to research Dr. King’s speeches and writings.

Before making the march back to the church, Gwendolyn Thomas led the marchers in song.

Dr. Martin Luther King was a heroic leader and activist in the civil rights movement and he not only induced change here in Humboldt, but all over the nation. The participants in today’s march came together to honor his work and his teachings so that they may never be forgotten.

MARCHING FOR DR. KING – This group of marchers dressed appropriately for the frigid weather Monday morning during the annual Martin Luther King Jr. march. The march began at Morning Star Baptist Church, made its way down Mitchell St., took a right onto Central Avenue, then stopped at the Municipal Building on Osborne St. After a brief program, they marched back to the church.