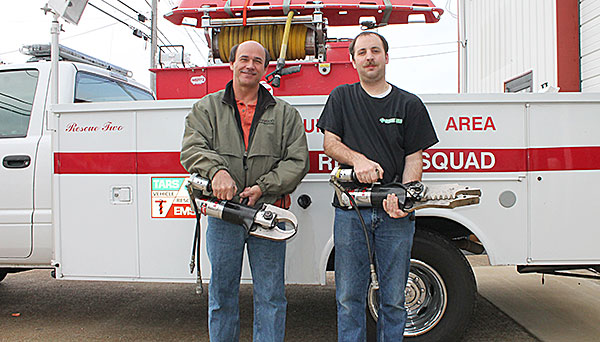 HARS 30 YEARS – Humboldt Area Rescue Squad’s Captain Jerry Privitt (left) and Lt. Jordan Anthony hold two versions of Jaws of Life used to extricate people in vehicle accidents. This Saturday the Rescue Squad is hosting a celebration for 30 years of service to Humboldt. Everyone is invited to attend.

A group of men and women that have dedicated their lives to saving lives is celebrating 30 years of service to Humboldt and the surrounding area. Humboldt Area Rescue Squad has been working many types of accidents, providing medical and public assistance for three decades.

The celebration will take place Saturday, January 26 from 1 to 4 p.m. at the headquarters located at 3707 East End Drive in Humboldt. Chief Jerry Privitt and Unit Director Randy Jones invite everyone out to join in the festivities.

Privitt said there would not be a program per se, but many of the staff will be on hand displaying some of their life-saving medical and rescue equipment. Around 3 p.m., former unit director and one of the original founders, Andy Rice, will speak.

The Rescue Squad is an all-volunteer organization that is totally funded through donations and sponsorship. No one on the squad is paid.

Privitt said it takes around $60,000 per year to operate. This includes keeping the members trained and certified, as well as upkeep on equipment, insurance, purchasing supplies, and many other odds and ends. If it were not for donations, the Rescue Squad could not function.

The squad has two crash trucks that are fully equipped. Tools onboard can handle extrications with Jaws of Life, inflatable airbags for lifting heavy objects and stabilization. One truck has a 300-gallon tank of water to use on small fires. One has an inflatable raft for water rescues.

The trucks have spine boards, self contained breathing apparatus, automatic defibrillators and other medical equipment and supplies.

There are five first responder vehicles made up of SUVs and cars that are strategically located in and around Humboldt. These vehicles are fully loaded with extraction equipment and medical equipment. Having the vehicles located at various locations serves two purposes. First, it makes for faster response times and getting on site as quick as possible, many times before EMS arrives. The second benefit is in the event of a disaster, such as a tornado that could potentially hit the Rescue Squad building where all the equipment would be stored, preventing them from assisting those in need.

The Rescue Squad volunteers all week long during the Strawberry Festival. One of their main focuses are the parades where they utilize ATVs mini ambulances equipped with medical equipment along the parade route.

Privitt and EMS Lt. Jordan Anthony say the Rescue Squad answers around 70 calls per month. Privitt noted that number would change with Tyson coming in. He said the number of calls would not be going down, but would instead be increasing due to all the people, vehicles and big truck on the streets.

With the expected increase, Privitt said they are always in need of more volunteers, and with the expected additional workload, they will need more sponsorships and donations.

Privitt and the Humboldt Area Rescue Squad invite everyone to join them as they celebrate 30 years.