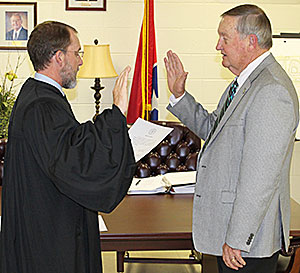 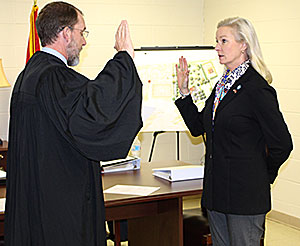 TREMBLAY SWORN IN – Three Way Alderlady Mary Ann Tremblay gets sworn into office last week before the monthly city board meeting. Judge Kyle Atkins performs the oath of office ceremony. This is Tremblay’s fourth term serving Three Way citizens. She was later elected as city vice mayor during the meeting.

The city of Three Way welcomed 2019 with the swearing in of the mayor and an alderman. Mayor Larry Sanders and Alderlady Mary Ann Tremblay were both re-elected during the November election.

Monday, January 7 was the city board’s first meeting of the year. Prior to the meeting, Madison County Judge Kyle Atkins performed the oath of office ceremonies for both Sanders and Tremblay.

With the full board officially sworn in, they dug right in to a busy agenda. The first item of business was to elect a vice mayor. Alderlady Tremblay had served as vice mayor for the past four years. Alderman Danny Wade asked Tremblay if she would like to continue her role as vice mayor, which she said she would.

Wade then motioned to nominate her for vice mayor. Mayor Sanders seconded the motion, which passed unanimously. Wade said Tremblay has served well as vice mayor and noted she is a member of the Tennessee Municipal League Board of Directors.

He is proud the vice mayor that represents Three Way is on the TML board. 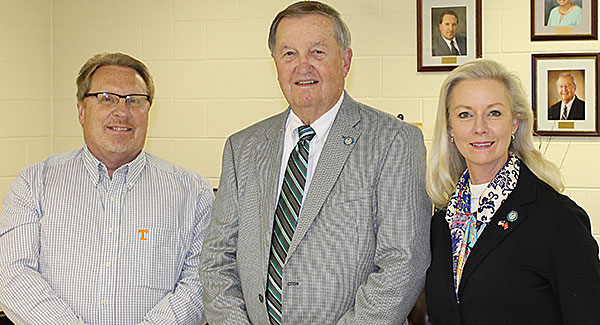 THREE WAY BOARD – Three Way city board members are all smiles after Mayor Larry Sanders (center) and Alderlady Mary Ann Tremblay (right) took the oath of office prior to their January 7 meeting. They were elected last November. Alderman Danny Wade was not on the November ballot as his term runs through 2020.

In other board business:

•The board unanimously approved the second reading of Ordinance 2018-3, which amends Ordinance 2018-2 establishing speed limits in Pine Hill Park. The amendment to 2018-2 now designates the city of Three Way as the payee for fines and/or penalties for violations within the park.

•Mayor Sanders announced the new speed bump had been installed at the entrance of Pine Hill Park. He said it has slowed traffic down as cars enter and leave the park.

•Mayor Sanders told the board the city had received its first reimbursement check from the state for work on the Turner Loop bridge replacement project. The city received $36,000 for expenditures for engineering and other services encountered. Sanders said construction work on the bridge is still scheduled to begin April 1.

•The city received a $500 property conservation grant from the Public Entity Partners. Grant funds will go toward the city’s surveillance equipment that was installed last year.

•During previous meetings, the board had discussed how to remove snow and ice from the city’s major intersections. After investigating the cost to purchase the equipment needed, the board thought it would be more feasible to hire a professional for the job.

Mayor Sanders told the board last week that Groundworks, a lawn and garden service company in Three Way, has the equipment to remove snow and ice, and that is also has a spreader for salting the intersections. The proposed price is $165 per hour with a minimum of $290. Sanders noted the city would be responsible for purchasing the salt.

The board agreed on the proposal and believes this is a service the city should provide. Mayor Sanders will get a list of the intersections to be cleaned and salted during winter weather.

•The city received $855 in land rental fees from the recently purchased property adjacent to Pine Hill Park. A large portion of the new property was farmed with a cotton crop last year.

The city of Three Way and the Madison County Sheriff’s Department have a memorandum of understanding. The city pays the sheriff’s department $100,000 per year for two deputy positions. The funds help pay for salaries, vehicles, and equipment and gear for the deputies. Deputy Cory Chance is the city’s other deputy.